My Birthday Month has gone..

For those that don't know my birthday was in May. I typically (for the last few years at least) host a Phillies tailgate at whatever home game on a Saturday and invite 25 of my closest friends. Had 18 people last year which was a pretty good turn out. I was debating going big this year and going for a luxury suite and surprising people. Maybe next year? Who knows with the way things are going I could have a luxury 'entire stadium to ourselves'.

The only reason I mention my Birthday passing is because my wife got me this awesome present. 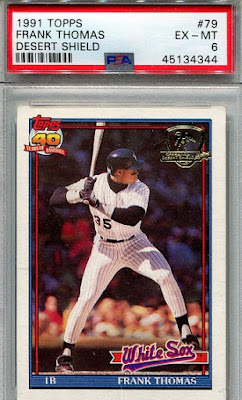 This has been on the list for a while. I did my research and from everything I can tell this is an authentic copy. The logo looks right. I know its not a high grade or whatever but those were way more then I wanted anyone to spend for the card. This was a reasonable price and the card just got dinged down cause of a couple of rough corners. Just looks like the card hung out in a shoe box for a while before being pulled. No creases or anything glaring at all.

I more or less finished cataloging my Frank Thomas collection. I have about 1,000 cards of his currently. Lots of base and inserts and then a couple nice ones, including the one above.

My trading hasn't been as frequent lately (last year or 2) mainly because my have list is pretty out of date and I am not as organized as I need to be. Also, I don't buy a ton of new product anymore just mostly sticking with singles and chasing cards from yesteryear. My want list is actually up to date, and Jeremy from Topps Cards That Never Were reached out cause he had a bunch of them. He was able to knock out a bunch of wants from sets that I've been working on for over 10 years. Always much appreciated. I filed them into the appropriate place the other day. He also hit me up with some Phillies cards. 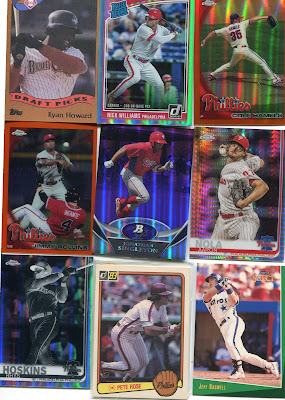 I'm a big fan of the negative refractor parallels. They look really cool in hand and I did not have this Hoskins. I have a small but growing collection of him. I hope he rakes this year with new management in place. He can play 1 position and concentrate on hitting. 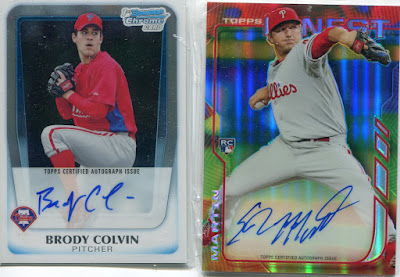 Also got 2 more on-card Phillies autos. Not sure whatever happened to Brody Colvin but this was my first auto of his. Based on baseball reference.com he never made it out of Double A. I know Ethan Martin made it to the big club for a bit. The Finest autos are usually pretty nice cards. I always liked the look of those sets in the 90s and today.

Thanks for the trade and thanks for reading!

Phillies still undefeated!
Posted by Brad's Blog at 8:24 AM 1 comment:

Went Fishing.. found me some Trout!

After seeing some of the crazy prices that Trout is fetching around the interwebs, I wanted to see what I had sitting in boxes upstairs. These were the best ones I found that could potentially be available. Besides these I have 1 2011 Trout Update (pulled in a pack in 2011) and 2012 Topps Chrome Sepia refractor that is in my Sepia refractor set.

Check out the Trout! 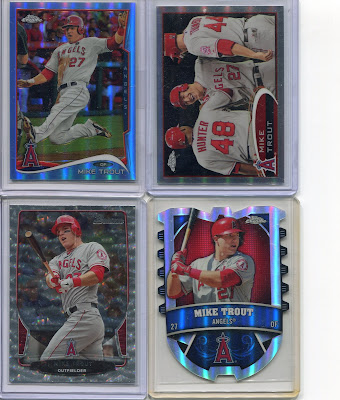 The 2013 Topps Chrome Blue refractor Trout is numbered out of 199. The 2012 Chrome is the refractor version. The silver ice and die-cut are nice looking cards. 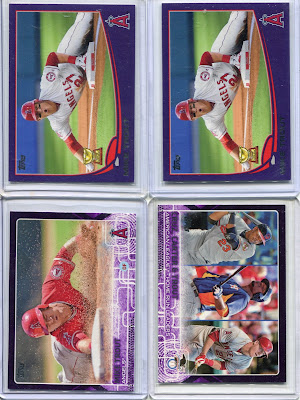 All of these Purples are from Toys R Us packs, back when they existed and sold baseball cards. The pricing is a bit all over the place on these ones but they aren't easy to find that's for sure. 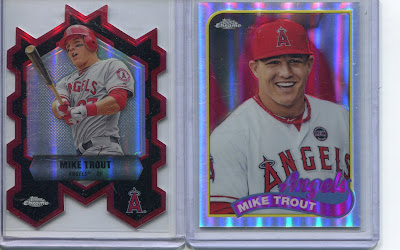 These last 2 are chrome inserts. The die cuts look nice. Not a bad haul for looking through my own  boxes.

A new 1 of 1 for the ole collection

I didn't even realize it's been a little bit since I posted. Work has been quite crazy these past few months. Thankful to be in the industry I am that everything seems to be humming along even with the craziness going on. Back to more important things, like baseball cards. I was able to add this Topps Vault card to the collection recently. 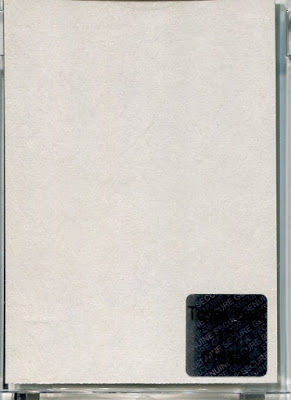 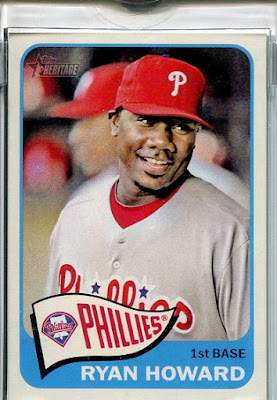 2014 Topps Heritage. I was pleased with the year. I went really hard after parallels that year for the Howard collection and I have quite a few of them. Wouldn't mind finding all the one of ones from that year. I now have this one and the base topps. 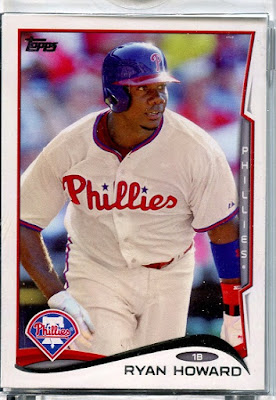 My favorite parallel from this year is probably this card though.. 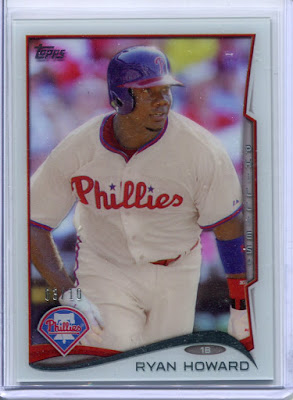 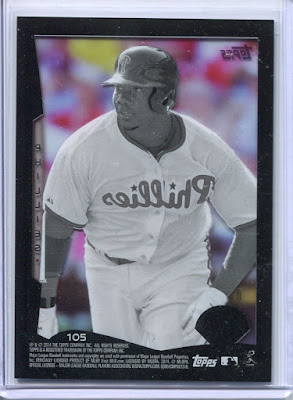 The acetates are really cool cards in person.

Thanks for reading!
Posted by Brad's Blog at 6:18 PM 3 comments:

The Game that never was ..

The Phillies officially offered refunds for individual game tickets this past week. You can request the refund and get it credited back to your card mid-May or you can do nothing and roll a credit into a game this year or next year. I decided to just go ahead and process the refund. I now have an interesting souvenir. I always preferred actual tickets then the electronic or print from home tickets. There's something nostalgic about them in their original form. I opted to pay the 2 bucks or whatever it was to get the tickets mailed to my house for Opening day this year.

Here are the tickets that never were. I was trying out some new seats this year and spent a little more for them. 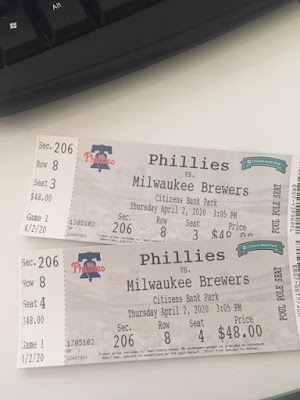 Lower level, near the foul pole in right field. Would've been a cool view. (Or directly behind the foul pole I'm not entirely sure). I've gone to 4 or 5 Opening day's in a row and that streak unfortunately has come to an end. Until the next streak!

Thanks for reading!
Posted by Brad's Blog at 1:13 PM 3 comments:

A couple of Patches!

This was the other biggish card I received in last week. I really like the look of it and design so I sniped it on ebay. There was 2 on ebay, I ended up getting this one for about 60 dollars less then the previous one. Pretty happy about that. 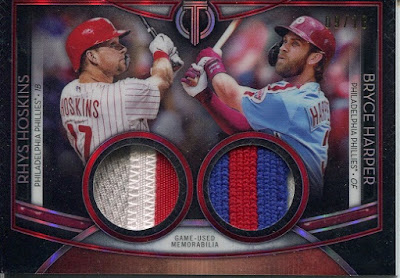 Rhys Hoskins and Bryce Harper Dual patch relic numbered out of 10 from 2020 Topps Tribute. I like the picture, how it looks like they are sword fighting with baseball bats. New sport to hold us over while they figure out how to play Baseball again in this post pandemic world.

Cataloging is going well. It's slow but steady. I imagine its going to be a multi month process and ever evolving. Working on the team sets portion is going to be interesting. Won't be so difficult for the 50s when there isn't so many sets that I'm chasing but when we get to the 90s I'm not entirely sure how I'm going to break it down.

Thanks for reading!
Posted by Brad's Blog at 3:25 PM 5 comments:

This is one of the big little cards I was talking about in my previous post. A friend on the blowout boards who knows I collect Ryan Howard shot me a message and asked if I was interested. He wasn't 100% on selling but asked approximate value I would give it. I gave my opinion he gave his and he said he was willing to wait for his price (not much higher then mine) I said in so many words no worries I'll take it! Shrewd negotiation I know. It's one of a kind and I wasn't going to let a different Ryan Howard collector take it. Looks nice in the case! 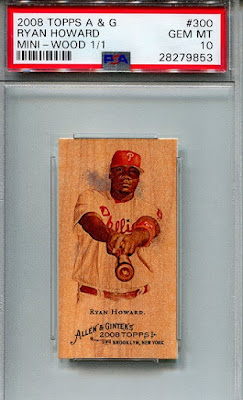 Graded PSA 10, from the World Series year. It's a super sharp looking card. Numbered 1/1 on the back in blue ink. Since they did those by hand back then for a number of years. Sometimes even forgetting to number them, in this case that was not forgotten.

I recently started inventorying my collection. I have 55 Ryan Howard autographs on cards and 96 relics. I'm still working on the numbered cards and cards of note, so far up to 191. I know I have a few more to list. I'm skipping regular base cards and some random inserts. I am including rookies and things like that.

I plan on doing the same for my Phillies collection, my HOF rookie collection and then my miscellaneous stuff. It will be nice to have it all in one place and easy to add/subtract too. I realized memorizing the whole collection is hard, I got most of it down but I do occasionally forget I have something and buy it again. Sometimes I buy stuff again because I like the card, but hey that's just me.

Thanks for reading!
Posted by Brad's Blog at 4:14 PM 3 comments: