I know the official start was Thursday night but the first Sunday is always more fun! I personally enjoy the red zone channel since the Eagles aren't playing until Monday night. I get to see all the games! We don't do commercials on Red Zone!

I completed my other 2 fantasy drafts. The first one was a 10 teamer with very slanted rules towards QB's and RB's. They always go before receivers. The only receiver taken in the first was Antonio Brown at #8.

I ended up with:

I ended up taking Tate to handcuff Megatron. He got most of the targets when Megatron was hurt last year. I hope Agholor does well this year he has the skillset to be the #2 on the high flying Eagles Offense. If Randle emerges as a decent back I'll be set at RB. We shall see!

My other league is much different. 14 teams, low scoring. If you pop 60 in a week you should win.

I had 5th pick out of 14. The first 4 picks were RB's, so I said screw it and took Antonio Brown.

I ended up with:

You don't have to start a tight end but grabbing Olsen late was fine with me. He will be a good bye week fill in or if one of my starters aren't doing well I'll put him in. I'm obviously slanted towards the Eagles and Steelers. I got bailed out by that TD with 2 seconds left on Thursday night.

That's all my fantasy teams. I always enjoy the drafts and constructing the teams, we shall see how some in season moves work or don't work!

I received some baseball cards in the mail the other day so I'll be back to regular posting shortly. Been a crazy week! 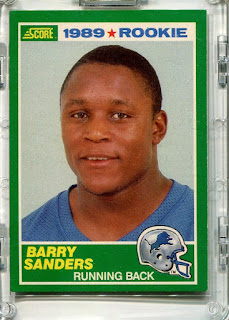 One of my nicer football cards, Barry Sanders RC!