A Little bit of Nostalgia!

The year was 1993. Topps Finest packs were out of my price range (I was 8 years old!). I didn't yet start my POG selling business so I had no money. I really really wanted a 1993 Finest Refractor. I would look at Beckett (remember when Beckett was semi relevant pre-ebay) and marvel at the insane prices of the Frank Thomas, Ken Griffey Jr and Cal Ripken Jr refractors. I would daydream of the one pack and the huge payday I'd get and retire and become a multimillionaire on the spot! Good times!

Although I was able to procure a Frank Thomas refractor last year (which is awesome), this little bit of nostalgia comes from last year's Topps Finest.

Low and Behold the Ryan Howard if he played in 1993 refractor! 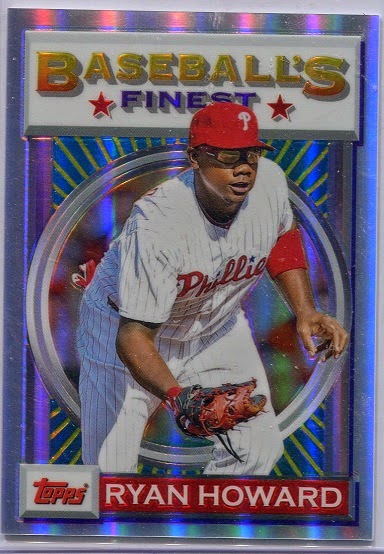 This refractor is numbered out of 25. The ones in 1993, I believe the estimated print run was 241 copies. (No numbers were officially released but thank god for math nerds!) I waited patiently for this card, in the beginning the prices were outrageous because there was a few set collectors with deep pockets going after these. (The Trout went for over 1K!) Eventually, it came up for auction with a 99 cent opening and I was able to snag it for much cheaper then previous! Yay deals!

The MLB playoffs, even though the Phillies are out, have been quite entertaining so far. Hope the good games keep happening, lots of fun to watch!

Thanks for reading!
Posted by Brad's Blog at 7:30 AM