I recently completed another trade with Spiegel over at Nomo's Sushi Platter. I always enjoy our quick and easy trades he always manages to send something interesting and new! Also, as an aside we went to the same High School just in different years (so he also went to the same high school as my brother at Dan's Other World) Small world! 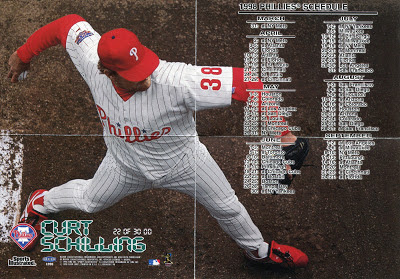 Yes that is a mini poster of Curt Schilling with a 1998 Phillies Schedule. Before he was a controversial figure with the Red Sox and Diamondbacks he played on some pretty bad Phillies teams in the 90s. He was a draw to go down to old Veteran's Stadium though. Back in the 90s my family had the Sunday package so we went down to the ballpark quite a bit. Always a lot of fun! 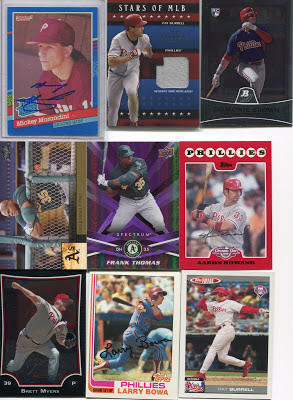 The card on the top left Mickey Morandini's auto got the whole trade started! One of the fan favorites from the 1993 team and its a nice looking auto! The Burrell was a nice surprise and is a nice addition to my Burrell Relic collection. Two more new Frank Thomas's added to the list.. I'm at 368 unique Frank Thomas cards now! I can smell 400!

Thanks for the trade Spiegel and Thanks for reading!
Posted by Brad's Blog at 7:11 PM