I recently picked up from ebay two 2011 Topps Chrome Phillies team sets. Not just any team sets though the gold and sepia refractors! Pretty difficult to find together and I didn't have any of the Phillies so it was definitely worth the price of admission! Don't be blinded by the scans! 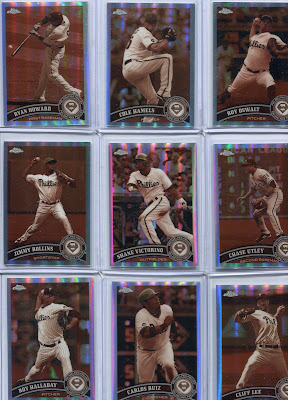 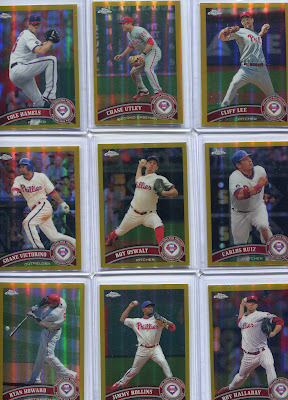 The sepia's are numbered to 99 in 2011. They changed it to 75 for 2012 (which honestly makes more sense because in 2011 they had 2 different colored refractors numbered to 99). Not pictured is Dominic Brown (I have the card for both but he was the odd man out for the 9 pocket page scan). Victorino and Oswalt are the only 2 guys not still on the team. Oswalt unfortunately didn't live up to the hype and Victorino signed a 3 year 39 Million dollar deal with the Red Sox. Can't blame him for taking that kind of money.

I never got around to scanning the rest of my Sepia set from this past year. I've showed half of it but I never followed up with part 2! I will do that soon. It is quite a pretty set to look at all together!

The golds are numbered to 50 so to get them all in one shot was pretty nice. The seller had them priced a little high so we went back and forth a couple of times and he eventually accepted my offer!

The Phils lost again but it was close, they need to score runs before the 9th inning though!