I received this card in a Group Break from my brother's blog Dan's Other World. I don't have many 1964 Topps cards so it's pretty cool to have an autographed one. 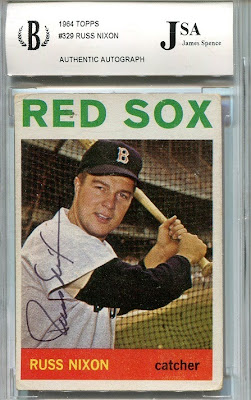 The card itself has a couple bends on the corners but overall not terrible. He looks genuinely happy to be posing for the shot in front of the batting practice cage. His career lasted 12 years. That's pretty good for any major leaguer.

Also received this card in the same group break: 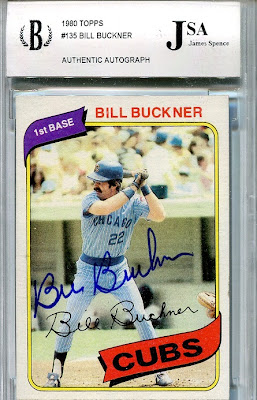 It's cool to have a nice Bill Buckner auto. He's famous for that play that everyone talks about. The ball through the legs you know it. The ball sold for over 400 K! Crazy! I wonder if the person who bought it routinely throws it through people's legs. All kidding aside the signature is nice and I like the old Cubs Uni's.

These 2 cards were nice but they don't come close to the prize of that group break in my opinion (there were actually quite a few nice cards) just talking about the prize I was lucky enough to get. I will keep you all in suspense and show that at a later date (aka I haven't scanned it yet but I will!)

Thanks for reading!
Posted by Brad's Blog at 6:52 PM