I'm enjoying this countdown immensely! I hope all of you are as well. Thanks to my new and old readers alike for coming along for the ride! This is the 1964 portion of the journey. 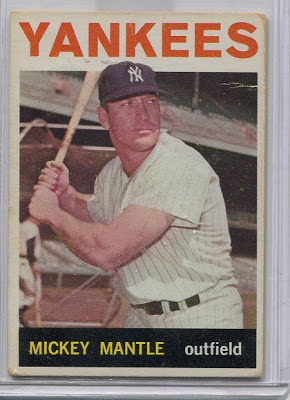 Mick was injured in 1963. According to the very orange back of this card "Mick was hampered by several serious injuries in 63" The card itself just has one crease thats visible but the rest of the card is quite nice. The set isn't nearly as popular as 65. Probably cause the design isn't nearly as cool.

I haven't picked up any of the new Topps this year. I don't really plan on chasing the set. We'll see how I feel about later on down the line when some other sets are released.

Just a quick post this evening, Thanks for reading!
Posted by Brad's Blog at 5:59 PM