I recently acquired another Hall of Famer to my rookie card collection. I got a nice deal on the ebay. I don't think the seller listed it well cause it was 127 1980 Topps cards including the Rickey Henderson.. and I won it for 5 dollars. I'm quite happy to snag this Rookie at a more then reasonable price. The condition isn't perfect but eh who cares its got character. Its just Rickey being Rickey (Manny did not invent that saying).

I loved Henderson's speech when he broke the stolen bases record and said " Lou Brock was the symbol of great base stealing. But today, I'm the greatest of all time." Yes you are Rickey!

If you want to see it here it is on youtube 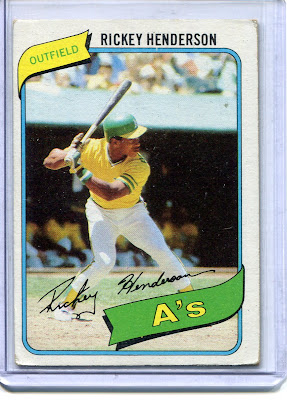 In the early 1980s, the Oakland A’s accounting department was freaking out. The books were off $1 million. After an investigation, it was determined Rickey was the reason why. The GM asked him about a $1 million bonus he had received and Rickey said instead of cashing it, he framed it and hung it on a wall at his house.

If you have some free time just google Rickey Henderson quotes a nice way to be entertained!

Thanks for reading!
Posted by Brad's Blog at 7:40 PM