I no longer have to travel at 5 AM Monday morning for the week and do a ton of things on the weekend and not play with my baseball cards and post. I know I have been MIA from trading. I have a bunch to trade and post if people are interested. I don't really have any new cards though, haven't purchased much. Been focusing on "older" cards. Also, I recently acquired many complete sets from the 80s and 90s (thanks Dan they are mine now!) (Dan is my brother he left them on the east coast so I get to keep them) (He's probably reading this at some point and I'm sure I will get a phone call)

I've been thinking about the National, the number 1 target is still Frank Thomas NNOF but if that is no where to be found, the #2 big card would be the 1994 Upper Deck Mickey Mantle / Ken Griffey Jr auto. I don't care if it's graded but I'd want it at least authenticated.

GSW vs OKC tonight. Currently watching the pre-game. Kinda want GSW to win but I have no real dog in the fight.

Phillies have come back down to earth but I'll take a winning record at this point in the season. I've gone to 2 games this year (Opening day and my birthday May 14th) (Both hat give away games!)

The Penguins made the Stanley Cup Finals against the Sharks. I haven't watched as much playoff hockey since the Flyers were eliminated. I have to root for the Sharks being a Flyers fan but I do have one cool Penguin card.. 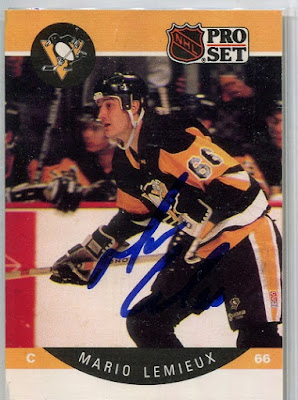 The classic pro set in a nice blue sharpie! As far as I know its real but I have no COA. I don't plan on selling it though.

Kind of all over the place on this post but had a lot of randomness to say. Hope to be back to regular posting ASAP!

Thanks for reading!
Posted by Brad's Blog at 5:44 PM 3 comments:

I've had an extremely busy real life month. Unfortunately, no time for baseball cards or blogging. Job change (Good change I think though!) and my birthday and some other happenings! (the not so good being I had to buy 4 new tires for my car ugh)

I am still very much planning to go to the national for 2 days in August. I have never been before so pretty psyched about that. The hotel room is booked and we're driving distance. I've been refraining from making big purchases because I have been saving for this show. The number one goal is a Frank Thomas No Name on Front PSA graded (for authenticity purposes, don't really care if it's not a super high grade). I need to have quite a bit of money available to snag it and hopefully find it at the biggest show of the year.

Here are some cards that were going to fuel my retirement from the 90s.. 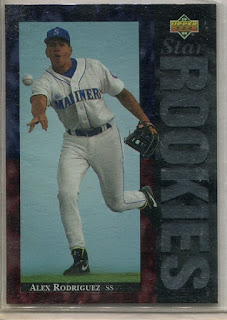 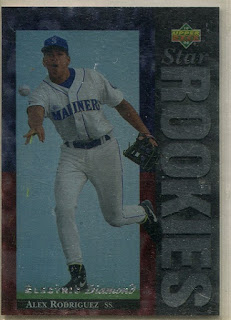 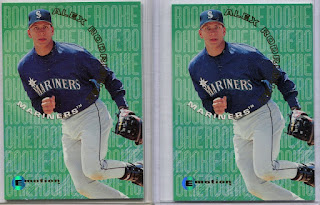 Four A-Rod rookie! Even the ever elusive Electric Diamond variation! I remember pulling that one out of a pack myself. I am still a huge fan of 1995 E-Motion. Very fun to open. I believe I bought a box in the 90s for 36 dollars. I'd buy again at that price just for the enjoyment of it.

I know I said I'm trying to get back to regular posting in my last post.. but work *should* calm down after this week so hopefully June will be back to a more regular routine.

Thanks for reading! Go Phillies!

A Gaggle of Ripken!

Not sure if I used the Post header correctly, but we'll go with it. Thanks for the affirmations on my last post on the Killebrew auto. These were also cards from my Dad. A nice little haul if I say so myself. 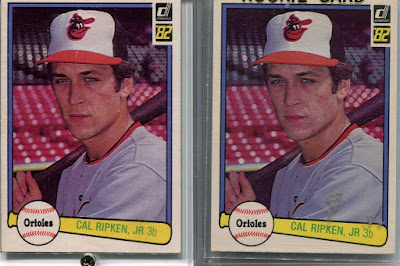 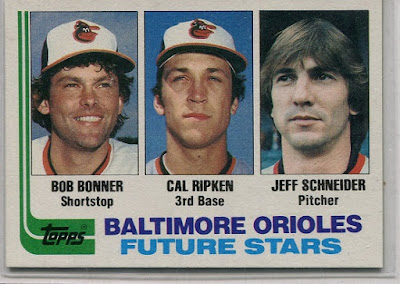 Two 1982 Donruss Rookies and one 1982 Topps Rookie! I already had a copy of the Topps but mine is in way worse shape. The Donruss's look good and I didn't have any until now! Gotta appreciate a couple of nice Ripken rookies!

Thanks for reading!
Posted by Brad's Blog at 3:04 PM No comments:

My Dad recently gave me some cards. I showed off the Jordan earlier. Here is one that is neat as well. It's old and vint-agey and signed. I don't have any authentication certs but I think it's real. The auto's don't look uniform and they look correct for the player. This was bought in a LCS in the early 90's as well. 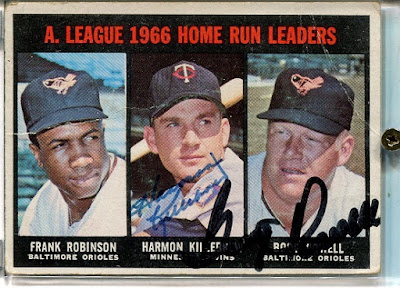 Harmon Killebrew and Boog Powell signed! Just missing Frank Robinson on the card. The card is obviously not in perfect shape but it has a certain charm to it.

I really like the League Leaders cards from the 1960s. So many great players. I was a bit slow on posting on the last week, but I will try and pick it up this week!

Thanks for reading!
Posted by Brad's Blog at 9:52 AM 3 comments:

I recently completed another trade with reader Scott! One of many (I didn't keep track of how many). He found some new Thomas's for me and I sent him some stuff off of my trade list. I haven't added new things to my trade list in a while (mostly laziness) but the list itself is pretty accurate. I do have those cards in my trade box or some binders.

Phillies are 15-10!!! Can't be more happy about such a strong start to the year! I went to Opening Day and got a hat.. and I'm going May 14th for my birthday (hosting a tailgate!) and getting another give-away hat! 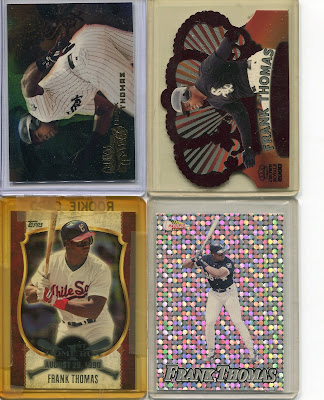 Pacific is so shiny! I need to get 1000's of those cards and make wall paper just to freak people out who come into the house. Always a big fan of Crown Royale, although I have always wondered how the design team came up with that one. How about a baseball card that looks like a king's crown.. sounds great lets do it! 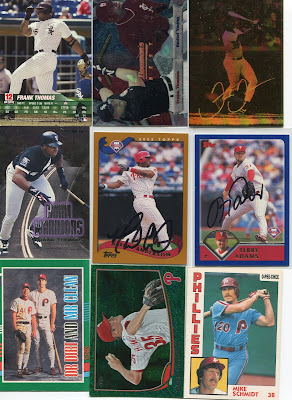 Got a couple IP autos of Terry Adams and Marlon Anderson! Both auto's I did not have previously. The Mike Schmidt from 1984 is an O-Pee-Chee card. I haven't come across that one before.

My fantasy teams are in a bit of a slump, hopefully bust out of it this week!

Thanks for the trade and thanks for reading!
Posted by Brad's Blog at 5:20 PM 1 comment: