Wes is the man hashtag Supertraders! I am going to work on a nice package to return. Hopefully find something real nice he doesn't have.

Every card in this package was either a hit or numbered ridiculous! 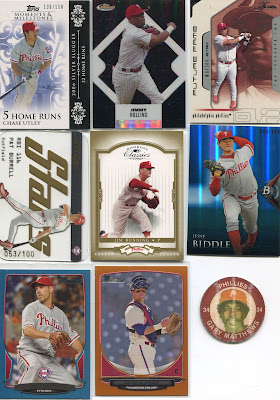 The Burrell card is awesome. I didn't know that parallel existed in that set. Moments and Milestones is a weakness of mine. I know there is 10,000 parallels but I want them all. 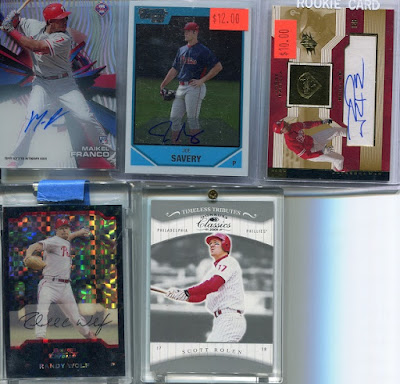 My first Franco auto! Much appreciated! He's starting to hit real well and look like the player he's supposed to be. Hopefully the heir apparent to Howard, Utley and Rollins. We can start talking about Franco, Crawford and Alfaro! The Randy Wolf is one of those un-circulated parallels. 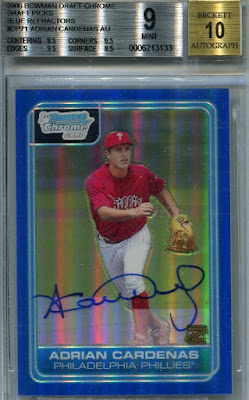 I believe this is my first Bowman Chrome Blue auto. Definitely my first graded one. He has a good signature too. He didn't pan out in the majors for the Phils but he actually retired in 2012.

Thanks for the cards Wes and thanks for reading!

For those that don't know Wes runs the great blog Jay Barker Fan's Junk!
Posted by Brad's Blog at 11:00 AM 2 comments:

My Dad gave me a few cards the other day. A few nice things and one really really cool thing (which I may give to my brother anyway, just in case he reads this) I hope the scan does it justice. 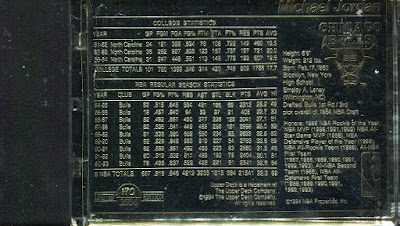 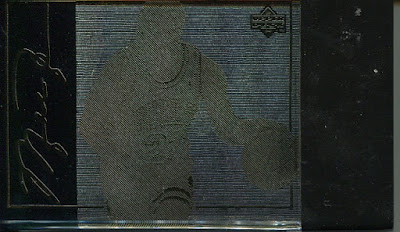 The card is coated in 14K gold. It was purchased by my Dad in a local card shop in 1994. The front didn't scan great but the card really pops in person. It's in a super thick case. Speaking of NBA, hope Curry comes back strong so the Warriors vs Spurs is interesting.

Thanks for reading!
Posted by Brad's Blog at 7:29 PM No comments:

I didn't really tell anyone I was gone, but now I'm back! I went to Florida last week for 5 days and scheduled up some posts! Very efficient of me. I received 2 card packages while away. Both awesome. I will scan this week and show off the goods. In the mean time what has been happening. I sent out 4 packages before I left, hope all 4 have landed safely. The Phillies have been playing semi decent. The offense isn't great and the bullpen is terrible but the young starting pitching is worth watching. In a season where they have 0 expectations, I will take that.

The Flyers pulled out 2 wins in a row so they won't be swept by the Capitals. We'll see if they have another win or 2 in them! Playoff hockey is fun.

The Eagles traded 35 picks or so for the rights to draft either Carson Wentz or Jared Goff. I like the aggressiveness but I don't love the options. I wish they would've played out this season with Bradford then go hard after DeShaun Watson next year.

Also, Kickball can be dangerous. I sprained my ankle playing it recently, but its almost all healed up now. Life advice, don't roll ankles, it hurts.

In honor of David Price being way overpaid and killing my fantasy pitching stats this week.. I present the first way way way overpaid pitcher in baseball... 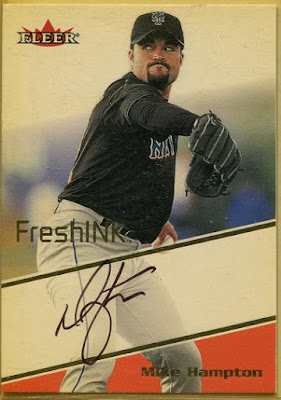 A Mike Hampton pack pulled auto! Wonder if I can sell it for 121 million...!

Happy Passover to those who celebrate and Thanks for reading!
Posted by Brad's Blog at 5:04 AM 2 comments:

At one point I had a patch-tastic series. My patch buying has slowed down quite a bit but when this one went up for auction I put a huge snipe on at the end so there was no way I was losing. This card is from 2014 Museum Collection and I remember seeing one surface back then but someone wanted 500 or best offer. Way too much for me. I ended up getting this card for 56 dollars. Quite pleased!

Patch is nice and dirty too! 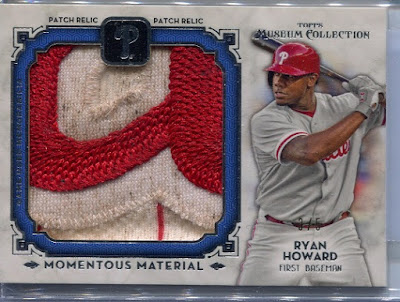 Looks like the bottom of the A in Howard. I like Museum Collection but it seems overpriced for what you get in a box. I'll let other people crack it and pick up the singles I want!

Tough loss of Schwarber for Tom. Tom runs the blog Waiting til Next Year an homage to the Cubs mantra. Now the Cubs have all this young talent and the reigning Cy Young winner. Many pundits and prognosticators picked them to win it all. Wrigleyville would be awesome for the playoff run. I lived about 6 blocks from there for 2 years and it was always a fun time. When I lived there tickets were also super cheap, I went to a good amount of games at Wrigley. Now Phillies tickets are cheap since they aren't so good. 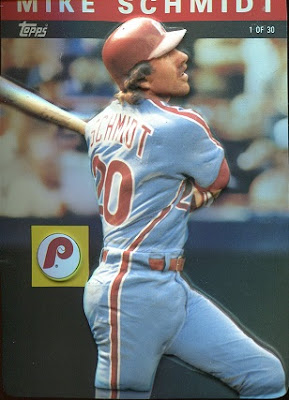 This is an embossed 'card' of Mike Schmidt. (I scanned it with the scanner bed open) No idea what set it came from but its definitely new to the collection! 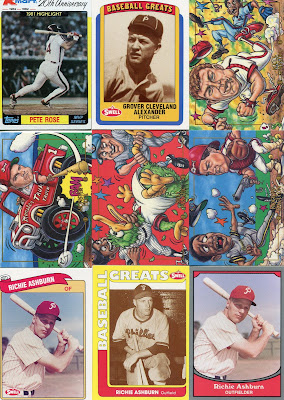 Those cartoon cards are great. I very much enjoy them. A nice cross section of food issue type cards. Seems like everyone wanted in on baseball in the 90s. The mighty power of steroids..

Thanks for the cards, I'll be sure to get some nice Cubs out to you in the future!

Cards from the Junior Junkie!

I recently received a package from The Junior Junkie. He has one of the more impressive player collections I've ever seen. Makes my Ryan Howard and Frank Thomas collections look small! (That's a compliment) It's always a fun challenge to find a Griffey he doesn't have to send him. (I don't always succeed) 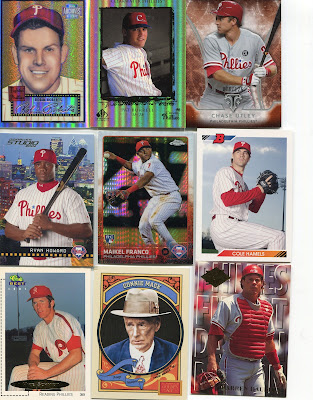 The Utley Triple Threads is one thick card. The Franco is a nice Prism refractor RC. I like those 1952 Topps reprints, they look nice next to the real one! I liked those John Kruk and Daulton only insert sets from the 90s. Daulton is a good guy, he was on the radio for a while locally til he got sick. He's getting better but I haven't heard if hes going to do any Phillies shows anymore.

Thanks for the cards and Thanks for reading!
Posted by Brad's Blog at 11:00 AM No comments:

This post is long overdue. Several months ago my work colleague gifted me some sweet cards. He decided to get in a couple group breaks and open a box or two of bowman chrome. He kept what he wanted and then just gave me the rest! I can't complain. 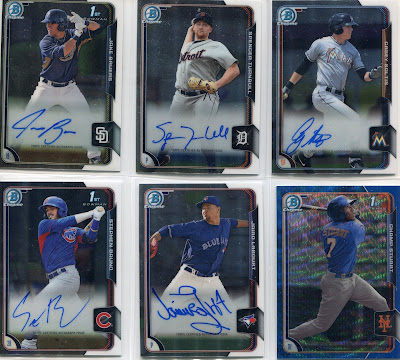 Five autos! No idea personally if any of them are good, but who knows the next Trevor Story could be lurking in there! 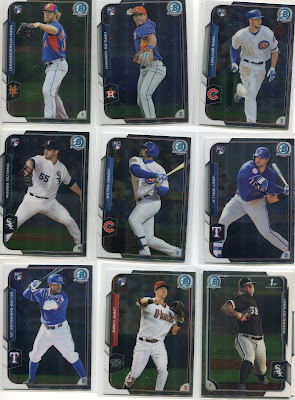 Rookies galore! All the major rookies in the set, very nice of him to just give me the Bryant. I did inform him of what these cards sell for (not huge money I know but not nothing) He didn't care, and besides I'm not selling anyway. 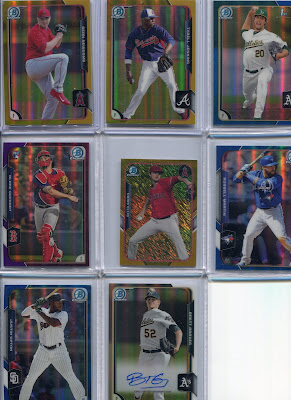 A bunch of color refractors! Noting held back here and much appreciated!

Thanks for reading!
Posted by Brad's Blog at 6:38 PM 2 comments:

I've been slow on sending and posting but I'm trying to maintain! I still love doing the blog and I'm hoping that doesn't change anytime soon. A quick thanks to Scott for getting a new trade going and getting me motivated to get some other packages together. I have 4 packages going out tomorrow and hope to have a few more done this month! (We shall see with work though) Regardless, I recently got some cards from Brian at Play at the Plate. The plays at the plate these days are less violent but I did see Elvis Andrus hand get stepped on in yesterday's Rangers game.

First week of baseball is in the books and it was a good one. Trevor Story hit 7 HR's, Eugenio Suarez is killing the ball and Curtis Granderson forgot to hit.

Check out the cards.. 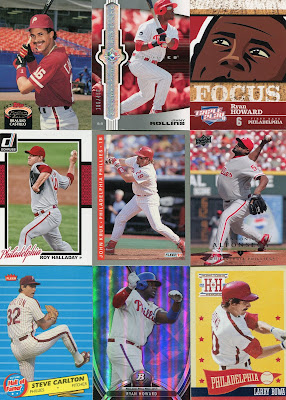 A few nice Rollin's and of course any Howards are appreciated. I am getting closer to getting organized on that front. I have 3 stacks of Howard's and I just need to go through my binders to find any stragglers! 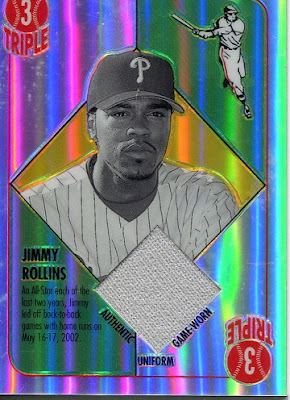 A sweet new relic! Always nice to add to the ever growing Phillies hit PC! Always fun to flip through those piles of cards. Maybe one day I'll binder them but the thickness of the relics makes me nervous to do that. Maybe just auto's that aren't high dollar.

Thanks for the cards and thanks for reading!
Posted by Brad's Blog at 6:56 PM 2 comments:

Who doesn't love 1995 score? No one! I am a huge fan of holograms in general. I wish they were more incorporated in every day life. I use excel quite a bit at work.. it would be much more interesting and fun if the numbers were holograms! 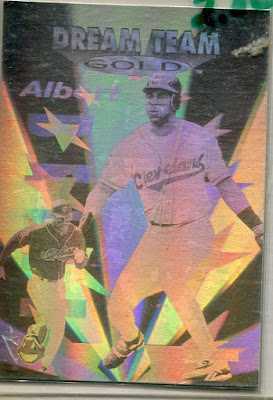 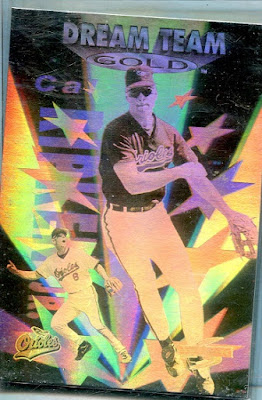 Joey Belle and Cal Ripken Jr fancy inserts! The scans came out real nice too now that I look at them closely. One day I'll actually complete this set, just haven't looked into what it would cost. These 2 were personally pulled by me back in 1995.

The Phillies bullpen might be the worst in baseball. 2 games, 2 blown by the bullpen. The hitting isn't doing a ton but that was expected. The starting pitching is solid so far. I'm sure they'll have their ups and downs but 1 run in 2 games is great! Just excited for baseball season! How about Trevor Story! (for those that read my fantasy post I drafted him in the 20th round!) Who knows if he'll keep it up but always fun to see a guy start his career like that. Good times!

Thanks for reading! Hope your team has a good first week!

Welcome back to baseball!

I'm currently watching the Royals vs Mets! Love Opening Day/Night Baseball! Excited for the year even though not we are not expecting much out of the Phillies. Just hope the young guys develop so they get good competitive soon! I drafted 2 fantasy leagues. I do one Head to Head League and one Rotisserie league (keeper league up to 4).

For the Head to Head I already had a major injury. AJ Pollock went down 2 days after we drafted. Hopefully the team can overcome...

Here's the line up

I went heavy on young upside pitching. I'm hoping one or 2 pan out and then I can swap out the rest for other free agent players. Obviously Stanton was my top pick, so if he has his usual power and stays on the field should be solid! I tried to draft for power, so Sano and Pederson need to hit a few HRs.

My Keeper League I drafted but had worked out a big trade before the draft was over so it changed my strategy.

I swapped Chris Davis, Kyle Schwarber and Corey Seager for Clayton Kershaw, Ian Desmond and Joc Pederson. Kershaw is a definite keeper next year so I'm pretty happy to get him.

I like having a couple veterans on the bench. The innings limit in this league is 1000 for the season, so if I get plus pitching from Kershaw, Sonny and Jofer that could be 600 innings of great stats! Hopefully that works. I need a lot of luck with the young hitters. Springer, Rendon and Pederson need to have great seasons for my team to have a shot. If they don't I'll probably end up trading JoFer for a bat. We shall see! 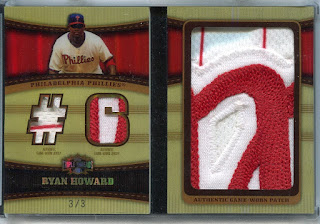 2009 Triple Threads Ryan Howard Vertical book. I believe this is the only vertical book I own, but its quite nice!

Good luck to your team tomorrow (unless they are playing the Phillies!)