I picked up a good bit of stuff in August. No idea why but everything I was looking for seemed to pop up in rapid succession. I don't think I bought a single card in September so funny how that works. Gotta keep grinding!

Check out some new Howard's! 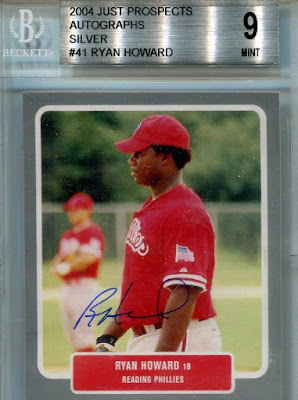 A pretty cool Just Minors auto. This silver version is numbered out of 200. Look how young he is before his career got going. 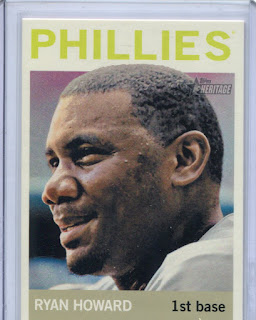 This is the color swap variation from 2013 Heritage.I had gone after this card several times before finally landing one. Always had a specific price in mind so I finally got it for what I wanted. Figured there was enough of them out there that I could be patient.

When I bought my ginter box I didn't want to pay shipping so I bought one of those grab bag hope to get a super awesome card for cheap type of boxes. I didn't hit one of the big chase cards but at least I hit a card for the PC! 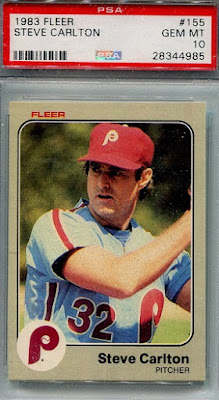 GEM MINT 10! Steve Carlton! He was pretty good. Happy to add this card to my Phillies team sets. Always a work in progress but always making progress!

Also picked up this card in a another deal. I had wanted one for a while to add to the PC. It doesn't necessarily fit in my Hall of Fame rookies since he didn't quite make the Hall of Fame but I still like the card. 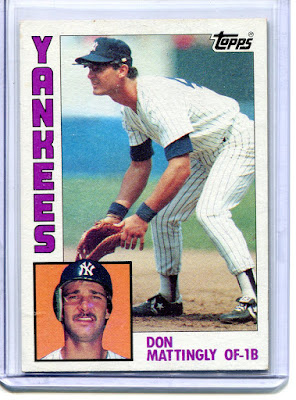 Yes, I do realize I called 1983 and 1984 old. It is only slightly older then me but not by much. Would this be considered the junk wax era? Or was it in full force with 1986 Topps? I remember that being super abundant when I was a kid and went to a local LCS. I'd open packs cause it was cheap and I liked the look of the cards.

Thanks for reading! Hoping the World Series is entertaining this year since the Phillies decided to collapse historically.

I have a little bit of a Hoskins Rookie card PC going. I showed off the one auto I was able to get for a reasonable price but I've gotten some other things along the way. My current number 1 target is the Stadium Club Gold Minted Variation. I pulled one of Corey Seager in my lone box and I really like the look of those cards. I haven't seen any on ebay for a bit but I'll keep searching. Bound to pop up eventually. Or if you have one let me know we can trade or you can sell! Your choice!

Here are some more Hoskins.. 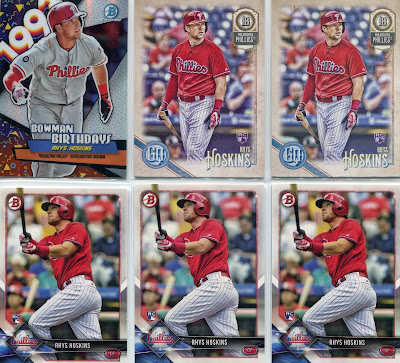 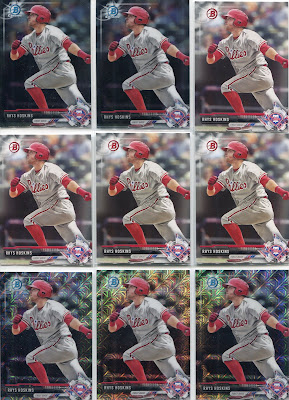 A few Gypsy Queen's a few Bowman's and a couple of Bowman Mojo's at the bottom. Those are nice looking cards. I like the 'atomic' refractor look. (doesn't everyone?!)

The end of the Phillies season was pretty dreadful. Even I can admit that. And then the GM saying that he could make an argument that every single player got better. Yea ok. Better players go on historic collapses. I'm not bitter or anything but this is a results oriented business you don't get results you get fired. I think the players tuned Kapler out with his way over the top everything is positive no matter what speech. Telling someone they are doing something wrong without spinning it positively every single time actually makes you a human being and someone people can relate too. Anyway that's my 2 cents for what it's worth.

Have any cool Hoskins let me know!

Thanks for reading!
Posted by Brad's Blog at 4:47 AM No comments: