I know I'm a little late on this post. I went to my first card show in over a year and it was a blast. I literally spent opening to closing at the show and had a great time. Going into the show I knew prices were high like everything else these days. I brought my usual amount of cash but figured I'd be priced out of a lot or not willing to spend it. The show was full of dealers and people. There was as usual a nice selection of low to high end and dime boxes in between. Plenty to choose from.

I did something I usually don't do as I mentioned in the previous post. I put together a trade/sell box of all my extras that I didn't really care for and figured other people might like. I had zero expectations, if I came back with every card no big deal and if I sold them all, great.

I ended up trading about 2/3rd's of the box to 1 dealer in a pretty large deal for me. He had laid out in his showcase a 1986 Fleer set with the Jordan's for 15K or best offer. I asked him the question what would he take for the set without the Jordan's. He said no one had asked him that before it's usually the opposite question. I already have the Jordan's so no need to pay the big bucks for them again. (although mine I got years ago when they weren't big bucks). Eventually he came to a number of around 3,500. I did not have that kind of cash on me, so I just asked if he wanted to look into my trade box. He rifled through and started pulling cards. Had a nice little stack. He priced them out in his head to about a grand. I then went through and I was around 1,100 so close enough. It would've taken him a while to piece them out since it was a random selection of cards. After some back and forth (he really didn't want to give me a grand and honestly it wasn't about the money for me) he made an interesting offer and said he would give me the 86 Fleer set minus the Jordan's for 1,500 and the cards. I didn't have that much cash on me and wasn't willing to hit the ATM. He then offered to go through the trade box again and I talked him into a couple of the cards. He ended up with another stack of about 1,000 dollars worth of cards. Valuation wise we were super close. No deal breakers. I ended up giving him the 2 stacks of cards and 550 cash for the set and a Bryce Harper auto. 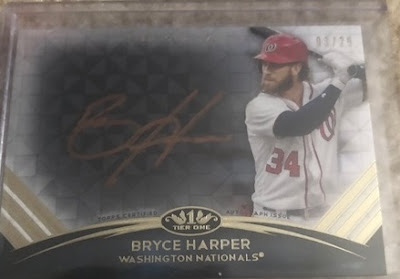 Harper auto from 2018 Tier one. I liked the full signature and on-card (part of the stack of cards I traded him had a Harper sticker auto in it). 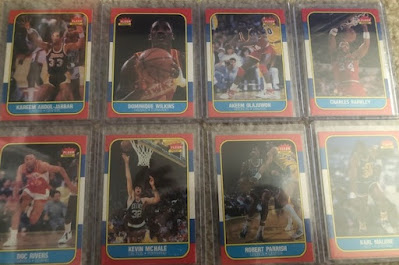 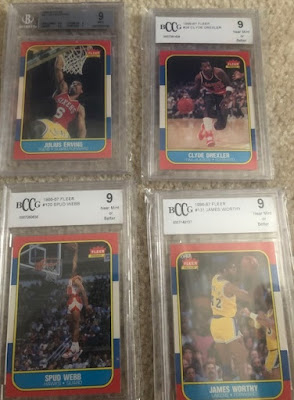 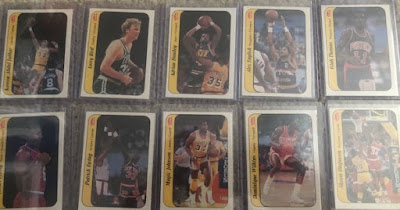 Some cards were already graded. One being a BGS 9 Dr. J. The set also included all the stickers. Some of the key cards look real nice. Probably in the PSA 7-9 range. Some of the commons *maybe* I get a 10 in there somewhere. The hope and thought is get them all graded and see what shakes out. I could potentially score huge. If I piece it out right afterwards the idea would be to go after a 1952 Topps Mantle. This would be a years long project and that's ok but it's good to have goals!

This deal took a good bit of negotiation and back and forth but I'm still really pumped about it. Happy to have this iconic set in my collection.

I still had a few cards left to trade and went over to see a dealer friend of mine that's always at the Philly show and does online breaks etc.

Ended up doing several small deals with him and ended up with some cool stuff. 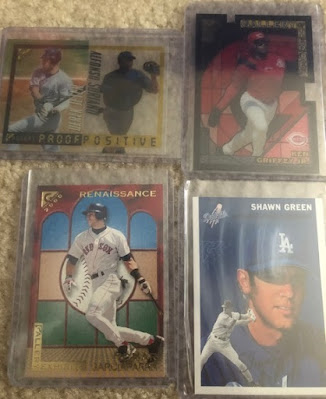 He likes to do box breaks and had some old school boxes. I gave him 40 dollars (literally after selling him a card for 40 dollars so in essence traded a card for these) to do a half box break of 2000 Topps Gallery. He let me split the packs randomly and pick the pile I wanted. I got lucky and pulled the Griffey Gallery of Heroes insert and the Jeter/Soriano insert. They are both real nice cards.
He  has a re-pack product that he puts out occasionally and posts all the contents online for transparency. Also, you get entered in a drawing for a Jeter auto at the end when all the packs are opened. I ended up trading an Orel Hershisher refractor from 1994 Finest for 2 packs. Felt like gambling a little and I hit! 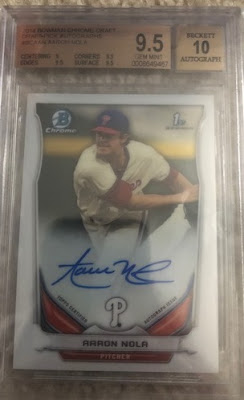 Perfect card for me! I did not have 1 and Nola always has such a nice signature. The 2nd pack (forgot to take a pic of the card) was a lower end 2nd year Lebron card. I had no idea of the value so he looked it up for me and it came in around 60-80. I owned it for about 10 minutes and traded it to another dealer for these 2 cards. 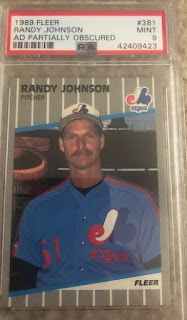 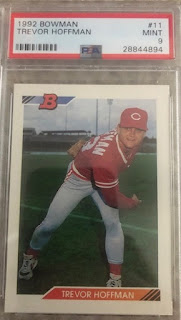 Randy Johnson and Trevor Hoffman rookies. They fit very nicely into my HOF rookie collections.
I bought this card below cause I liked the look of it. It's made of cloth and just not something you see everyday. 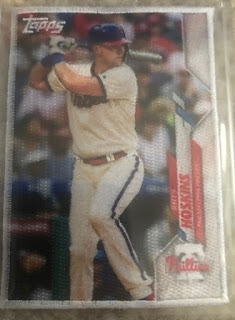 After wandering the show a bit more, I thought this Soto wasn't overpriced so I grabbed it. A fine 9 indeed. I think he's going to be a good one. 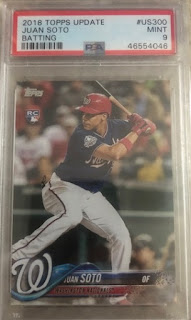 I saw this bat at Hunt's auctions and I just really liked the look of it, so I grabbed it. I don't often buy bats but I have a few now in the collection. Something unique.

Such a great Philly design. Just need a case now and some wall space to hang it.
Oh yea and for fun, I dropped 2 million on this Tatis Superfractor (just kidding but I got to hold it) 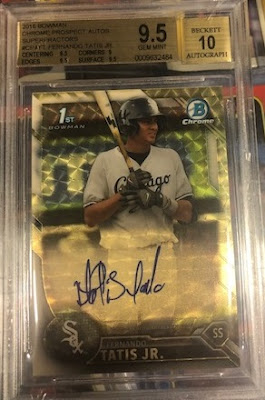 Maybe the most expensive card in the room? Had to be close to it. Saw some 1952 Mantles that people had marked over 300k.
All in all, was a great time. Looking forward to the next one. I got rid of most of my trade bait that's been sitting around for years and turned it into an awesome set. Picked up some other fun things and it was just fun to chat about cards with people. I'm not a shy person so I struck up conversations with quite a few different people.
Thanks for reading!
Posted by Brad's Blog at 10:13 AM 6 comments:

Going to the show!

I am hitting up the Philly show this weekend. Planning to bring some cards with but no expectations. If I sell or trade a few great if not, also great! Nothing too crazy, the "best" card probably being a Mike Trout blue refractor from 2013 Topps Chrome. I'm just excited the show is on. I'm fully vaccinated so I'm good to go! 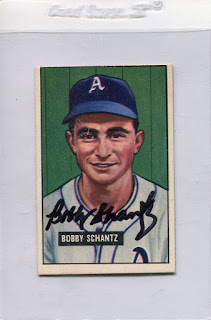 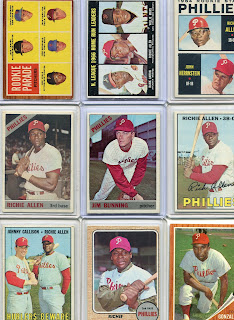 No real rhyme or reason. I just picked some random pictures. I will be looking to complete 1952 bowman Phillies if I can. I want to put a dent in 1949 Bowman (I have the Ashburn and Roberts) so hoping I can get the other not as expensive cards! I'm always on the lookout for random things. Anything that catches my eye that I don't usually see or search on ebay. I will be absolutely shocked if I find that Griffey Ionix auto. I'd break out the ole credit card for that one!

Go Phillies and yay for card shows coming back!