I recently acquired a Sam Bradford auto rookie from triple threads on ebay. The purpose for this card is to pair it with the Colt McCoy. You see they are Frenemies!!! When Colt and Sam were seniors in college they gave an interview on ESPN highlighting even though they are on rival schools (Texas and Oklahoma) they can still be good friends. I disagreed with their sentiment because I'm old fashioned like that. My girlfriend on the other hand thought it was cute that they were friends despite the rivalry. I wonder how true OK and TX fans feel.

The cards themselves actually are quite nice. They are both triple relic autos numbered out of 99 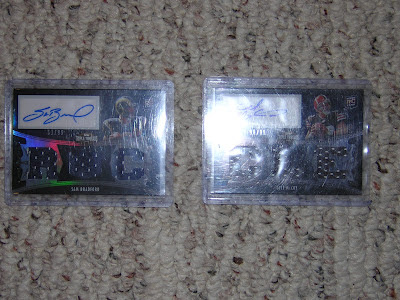 The other day I was talking to my girlfriend and we decided to go after a complete rainbow of one of the Phillies players. I already have the gold refractor and base refractors of Ryan Howard (pulled from the case break) so I figured he was a good candidate. I was able to quickly secure the black, blue, purple, orange and xfractors. I am bidding on the red. I still cannot find the atomic one(if you have it I will trade you handsomely or purchase it).

As all of you know no rainbow is truly complete without the big 1/1 of superfractor...

Look what I just bought!!!

Sorry if the picture kinda sucks I was pulling it off the internet.

But regardless it will be mine within a week then the hunt for the atomic really heats up!!

Trade with Play at the Plate!

Another trade that I received this week was with Brian from Play at the Plate. He inquired about a couple Joe Mauers I received in my Topps Chrome case (see previous posts to see everything I received in the case). I am attempting to complete the Archives master set. He literally sent me every insert he had. It will definitely take a chunk out of want list. I will get that updated at some point, works been busy. And Brian I still owe you the return package. I'll get that together before the weekend is up. I'll see what Rangers I can find. 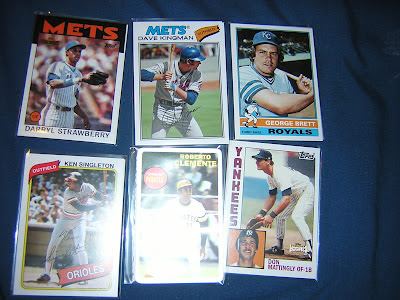 This is just a small sampling each little sleeve had 2 or 3 cards in it. I really like the 3D set and the Deckle Edges.

I recently completed my first trade with Spiegel of Nomo's Sushi Platter. Another Dodger fan in the blogosphere. This trade also came from Thorzul's break when Spiegel inquired about the James Loney relic. I sent him a package of Dodgers cards and he sent me a very cool assortment of Phillies cards.

Here are some highlights: 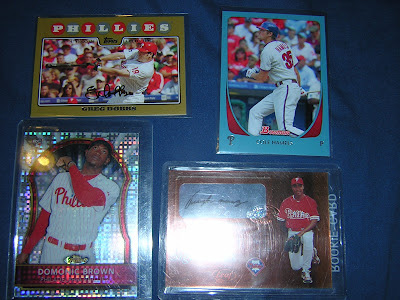 The Dom Brown is numbered and is actually my first rookie card of his! Its quite shiny and thats never a bad thing. The Cole Hamels is a cool card from this years Bowman, almost numbered and shows him batting. The Greg Dobbs looks like an autograph but I'm not sure if its the fake kind. If anyone could let me know that'd be great.

The gem of the package: 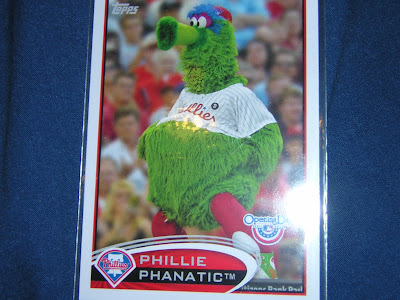 The best Mascot in all sports!!! I didn't buy any update this year so its great to add this card into the fold. I'm a big fan of the phanatic. I have many memories in my youth of following him around Veteran's Stadium.

I'd like to say thanks to my followers, can't believe how quickly that number has gone up!

I recently completed a swap with dodger fan GCRL. He writes a well informed and interesting blog over there so check it out if you haven't already. It was a quick and easy swap. I posted my take from Thorzul's group break he asked for some cards and a trade was born!

Here is my loot: 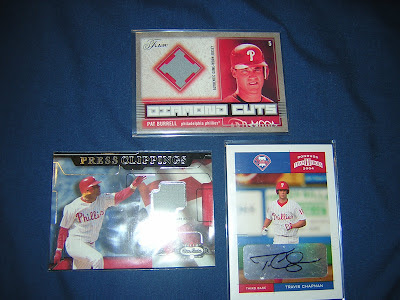 One Relic of Pat the Bat. I was always a Burrell fan never understood why he the fans got on him so much. He wasn't going to be a hall of famer but he was a really solid right handed power bat in the middle of the order. And he Killed the Mets which is never a bad thing. The auto is of Travis Chapman.. he never quite made it and the other relic is of Bobby Abreu.. I liked him but he never really seemed to try too hard to field the ball at any point in his career.

Over the last few days I've been going on ebay searching for 2012 Topps Chrome Sepia refractors. I have decided to attempt to complete the entire set. If anyone has any please let me know and I will most likely need it. I will trade or purchase it from you. Currently I have about 20 of them and I am keeping a detailed list of how the card was obtained. I've never undertaken this type of set before and I hope the journey will be as enjoyable as the finish.. Oh yea I did buy this one though...

Any Help is greatly appreciated!
Posted by Brad's Blog at 9:12 PM 2 comments:

As all of my readers know I cracked open a case of 2012 Topps Chrome. That commemorated my first day of sharing and blogging extensively and I had a great time doing it. I've since traded with a couple of you and have some more trades in the works that I look forward to completing.

Within Topps Chrome there is photo variations of a number of players. They fall one every 900 packs or so. In this case I hit on the Bryce Harper black auto, and the cut from the same cloth dual auto Matt Moore/Jeremy Hellickson so I thought no way there was a photo variation too. I had already shipped off a bunch of base cards and wasn't concerned in the least that I had traded one of them. My girlfriend disagreed and said we should check anyway. I said she is free to check and can use the set that is bindered to compare the pictures. We pulled up a check list and low and behold ICHIRO!!!!

Photo Variation that I now know I have!

Has anyone else discovered hidden gems by accident? Always fun!
Posted by Brad's Blog at 6:46 PM No comments:

I just completed a trade with Arpsmith (everyone's favorite Giants Blogger) I sent him (on the way) a whole bunch of Topps Chrome and whatever I could find of Allen and Ginter and some Giants refractors and he sent me some Phillies goodness.


On with the show! 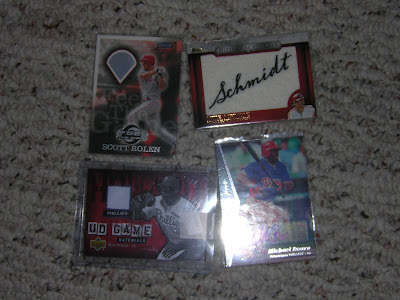 In this picture we have a Scott Rolen relic, a Ryan Howard relic, a Michael Bourn auto (I really think the Phillies are going to sign him this winter) and the Schmidt manufactured relic(I had the patch one so this completes the manu relic set!).

The gem on this package was the next card ... 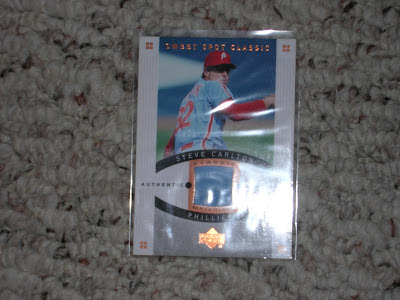 This is my nicest Lefty card and I hope to add many more in the future.

I just completed a trade with William over at Foul Bunt. As many of you know he writes a real good blog and is quite easy to trade with. I sent him over a whole lot of Topps Chrome and he sent me some awesome Phillies stuff. 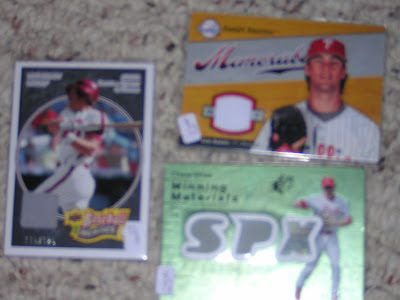 He sent a Mike Schmidt heroes relic, a Cole Hamels relic and a Chase Utley dual relic (numbered out of 15!). He also threw in a couple of other base cards and some inserts from years past. (none of which I had so thank you for that).

But thats not all.. he successfully gave me my oldest Phillies card 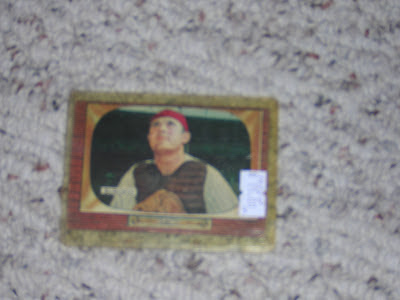 Thanks for the trade! Your cards were shipped today and you should see them hopefully shortly!