I not so recently picked up a few retail blaster/boxes of Topps Chrome. I am disappointed case prices have driven me away. One day I'll make enough money to set aside to open a case. I rarely ever sell too much so I'm not in it for the money. I just find it to be an immense amount of fun to open that much baseball cards at one time.

Here are some of the cards from the break. 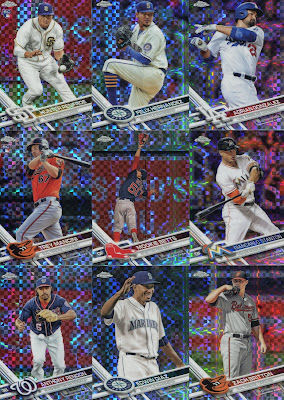 These were the nicer X-Fractor cards from the mega box thing. (not sure what they call it) The Betts is a nice picture. I do like the xfractor design look. Only thing that beats it in Chrome is atomic refractors. How about Stanton getting hurt again, he's been really snake bitten this year. 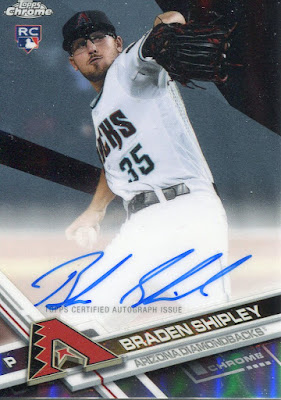 This was my 'big' hit! Never upset to hit an auto. Don't think he is doing to much.. (checks..) currently in Triple A and his Era is up over 7. He needs to get it going to get back to the majors. Who knows it can happen!

I hate to call these old inserts, cause then that means I'm old and I don't feel old so I'm not old. Solid logic there. I always enjoy a good late 90's early 2000's insert set. I feel the creativity in the industry really ramped up because of all the competition and everyone was trying to stay relevant (also wow did they print a lot of cards!) Some rarities still hold value but most of the cards did not. Made getting back into collecting all that much more fun to pick up cards that were expensive back then and are not now.

Check out these inserts! 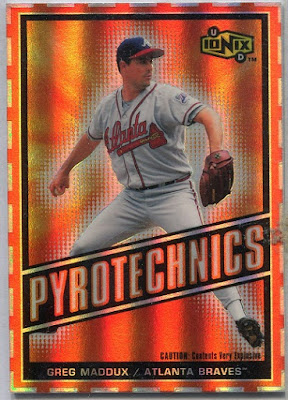 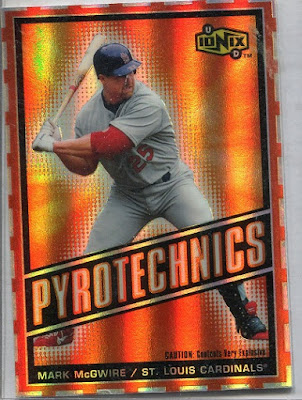 Upper Deck Ionix Mark McGwire and Greg Maddux Pyrotechnics inserts. I remember opening this box back when it came out and enjoying it. There are lots of different cool inserts and the cards have a nice stock to them.

What are your favorite 'old' insert sets?

Thanks for reading!
Posted by Brad's Blog at 4:50 AM 6 comments:

A Plate for Printing!

I don't specifically collect plates but I have quite a few Ryan Howard ones from random purchases through the years. I do like when the picture still looks good and isn't all ink stained up from the printing process. I think this one qualifies as nice. 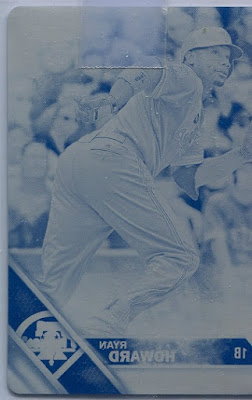 This is the 2016 Topps Chrome Cyan Printing Plate. I do not have the superfractor of this year. It has been on ebay since 2016 for 400 dollars and I am just not willing to pull the trigger on the over spend. I have overpaid for Superfractors in the past but that was when it was the last card needed for a rainbow. I would still be several cards away from a rainbow in this case. Unless I hit the lottery, in which case I already have a plan to buy every single Ryan Howard card on ebay because who cares about price at that point. That mail day would be epic!

Thanks for reading, let's not talk about the game today (Braves won 15-1 yikes)
Posted by Brad's Blog at 4:33 PM 2 comments:

I picked this card up in an Inception auto lot. I figured I'd pay about what I paid for the Hoskins anyway so the other cards were just bonus. I plan on eventually selling or trading off the other cards since they don't fit my collection but some of them are pretty nice with the patches and the autos. I love the look of inception just box prices these days price me out so singles buying has been my thing lately. Always on the lookout for a fun or good deal but not too disappointed when I deem everything is overpriced. Pre-sales are crazy these days. I would love to continue my What's in a Case series with Topps Chrome but I haven't been able to budget a case in each year at this current rate. (I've hit some good cards out of these cases!)

Anyway /end rant, Here is the card this post is about. 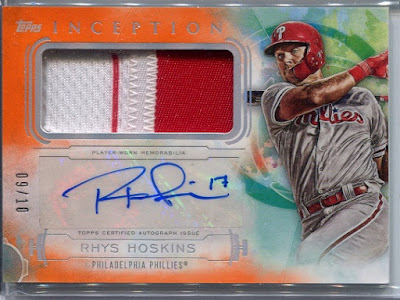 A low numbered (9 of 10) Hoskins Patch auto. I know it's not his rookie patch auto but that's ok. It's one of those really visually pleasing cards that will stay in the collection a long time. I've been selective about which Hoskins autos I pick up and I am now up to 6 autos of his. Pretty solid! The most expensive one is the blue auto I showed in the previous post since it's Bowman and the cheapest one is probably the Bowman Tek one (although I love the look of those cards).

Thanks for reading, maybe another HR derby at the Phillies ballpark tonight!
Posted by Brad's Blog at 4:38 AM 3 comments:

I recently picked up this rare-ish Ryan Howard card. Last year I saw with my wife Andrew McMahon in the Wilderness in concert (formerly Something Corporate and Jack's Mannequin lead singer) It was a fun show and this card is blue so it totally ties into one his hit songs. Work with me on this I'm a sports card blogger. 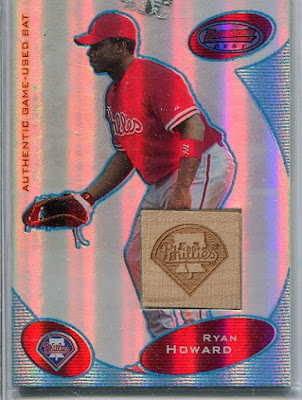 The tape is on the top loader. It's the 2003 Bowman's Best Rookie Relic with the cool Phillies logo stamped into it. Based on odds these were 1 in 22 boxes and apparently only 10 of each player. Don't know how accurate that is but they do not come available very often. I actually paid less for the red one that I have which is twice as rare. Both of them look nice next to each other.

Thanks for reading!
Posted by Brad's Blog at 7:32 PM No comments:

BIG trade for me!

As all of you that read these parts of the internet know I collect Phillies mainly but have side PCs of Ryan Howard, Frank Thomas and a growing one of Rhys Hoskins. (I'm trying to be selective on that PC but it's still fun to find some gems)

I recently completed a higher end trade on blowout cards. I've traded a couple times on there and haven't had any issues. Also, have traded 100s of times on here and maybe have had 1 or 2 problems but nothing crazy. I got ripped off once as a youngster when I did Magic cards online. Don't worry guy I memorized your name and address. Anyways onto happier things.

Maybe I lost a little on total value but I don't care I traded 2 non PC cards for a card I plan on keeping. 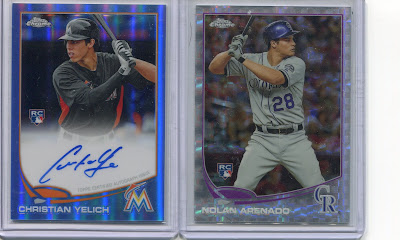 I pulled these personally myself back in 2013 and they basically sat in a box for along time until I saw the Yelich go from a 20 dollar card to a 300ish dollar card. Figure strike while the iron is hot. 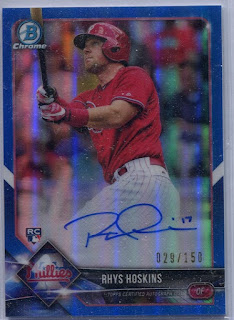 Ignore the dust, I'm terrible at cleaning my scanner. Its a clean card. A sweet on-card blue auto of Rhys Hoskins! Super psyched to get this into the PC. I rarely if ever open bowman (the occasional retail here or there) so the odds of me getting this card were very low and I didn't want to buy it off ebay for the asking prices. Very happy with the trade! I don't feel that anyone lost the deal but even if the Yelich turns into higher value doesn't matter since I'm keeping this card.

Thanks for reading and Go Phillies!