I've been half collecting Rhys Hoskins. I say half because I am only really going after his rookie stuff for the large majority. I have a couple non rookie cards but that isn't my main focus. This card I had been after for a little while but there was only 1 on ebay for forever and the seller refused to budge off his price. Eventually another copy came up for auction and I got it for less then half of the other one.

This is the super short print from Flagship. The clapping variation as it is called. Here is the short print: 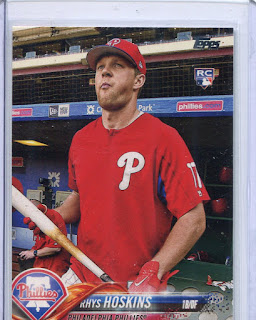 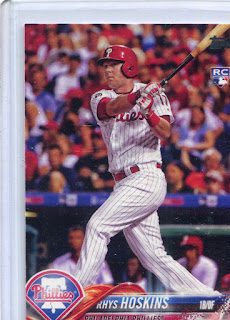 Pretty sure a nice dealer after purchasing another card just gave me one from his stack. Didn't even ask for an extra buck or anything.
It's nice to check the super short print off the proverbial list. The SSP fell 1 in 1,619 packs. And by my quick eye counter there was 26 of them.
Have another big insert coming in soon, hopefully the mail gets it here. Won 2 Fantasy Football championships last weekend so treated myself to a nice card!
Thanks for reading!

A couple of Triple Threads

I've never personally broken a box of Triple Threads. A bit too high risk for my tastes and there is many cards in there that I have no interest in going after. That being said I do like the Phillies cards from the sets. I've picked up quite a few singles through the years.

I grabbed these 2 off the same seller. They are solid looking cards in person. 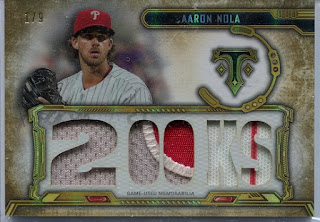 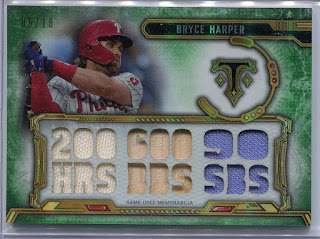 The Nola is the gold version and the Harper is the green. It's cool that the Harper has 3 different colors and the Nola has an obvious patch in it.

It's been a bit disheartening to see the Phillies not do much this off season. The bullpen clearly needs an overhaul since they were historically bad last year. Even if they were just bad and not historically bad they would've probably made the playoffs. It's annoying when billionaires cry poor. Owning an MLB team is an investment and not all investments go up all the time. Sell it to me for a lot less, I'll take the risk.

Anyway off my soap box, the cards are nice. I know Ryan Howard was in this years set but I haven't been able to snag any autos yet. We shall see!

I've been half collecting 2000 Upper Deck Ionix. I really like the cards but I don't want to pour a ton of resources into it. If I see a decent deal I'll try to grab it but I'm not overly going out of my way. I have the main set (with the rookie short prints) and a couple insert sets all but done. I am missing most of the Pyrotechnics and the Warp Zone's are real tough to come by at a fair price. They were the elusive 1 in 288 pack insert. I haven't really gone after the reciprocals but I don't think any of them are overly expensive.

I was shockingly able to grab the Jeter Warp Zone for about 20 bucks. In the listing the seller pointed out a defect but in hand it's really hard to spot so I'm perfectly fine with this card. 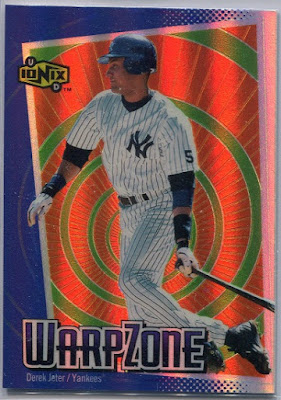 The white spot on his face is my scanner. There's something with the top edge that the seller pointed out but I had trouble finding it. I'm sure it wouldn't grade great but thankfully I do not care about that. The card is pretty sharp in person and looks as good as these inserts should look. 1 down, 14 to go!
Thanks for reading!

Did someone say wood.. minis?

Remember the wood mini fiasco from a few years ago in Ginter. Where none of them were packed out? We still don't know what happened to them. They haven't shown up for sale in one fell swoop or anything. I bet they got stuck under some machinery at the factory and whomever line worker messed up was like not taking the blame for this one and just got rid of them.  This year Topps did not mess up putting into packs the wood mini's. I was able to grab the Ryan Howard.. it was listed as Frank Howard on ebay. Still went for about what I was willing to spend on it. This is now my 3rd Ryan Howard wood mini! 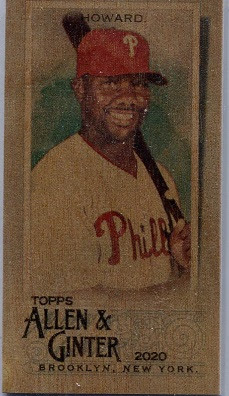 I think the white stuff is just from my scanner. I don't keep it dust free. It tends to sit there all day. Either way it's a nice card. I've become a bigger fan of the wood mini's in general. 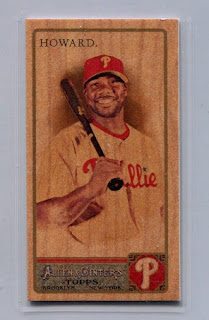 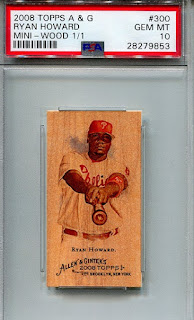 Here are the 2011 and 2008 versions respectively. I have no plans to grade the ungraded ones. I purchased the PSA one already like that. It does look nice in the case though, not gonna lie about that. 2008 was a great year for the Phillies, at this rate their last championship in the next 30 or so years.