My trade posting and trading has really slowed down since I moved. It's not for lack of want just lack of reaching out and doing it. I feel like I have too many random cards unsorted and it annoys me. I want to have a more succinct want list (although my current want list isn't bad just missing a ton of Phillies cards just no idea which ones)

I finally hit my man back Too Many Verlanders with a return package. It was a long time coming and I hope he likes what I picked out.

He was kind enough to send me a stack of numbered cards. 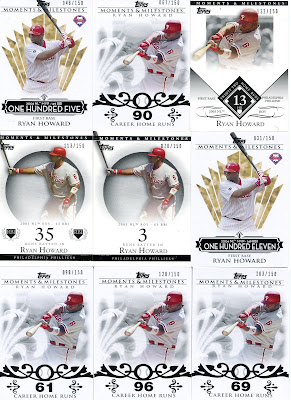 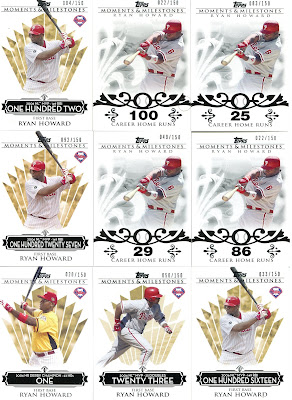 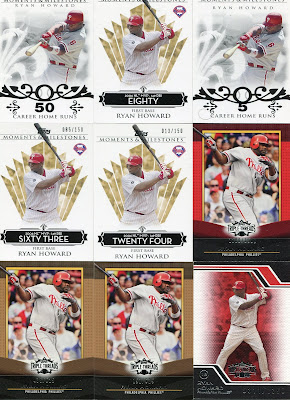 A whole lot of Moments and Milestones. I know that set has like a billion parallels but one day I will get all the Ryan Howards (or not, if I were you bet the not) but I'll try! The Triple Threads base cards are pretty cool and Sepia parallel. Love me some Sepias (for those that don't know my greatest set achievement is a full 2012 Topps Chrome Sepia set, will have to re-post that in the future)

Thanks for the cards and as always thanks for reading!
Posted by Brad's Blog at 6:47 PM 1 comment:

Happy Holiday weekend to everyone. Hope a slow work week up ahead (yea right). As I sit in my living room watching Top Gun (a classic) I thought why not post on my amazing baseball card blog. I have a few cards I need to scan this week some cool some not so cool but all cool to me so cool. (new record for using the word cool in one sentence)

This is the master piece.. from Upper Deck Masterpieces! 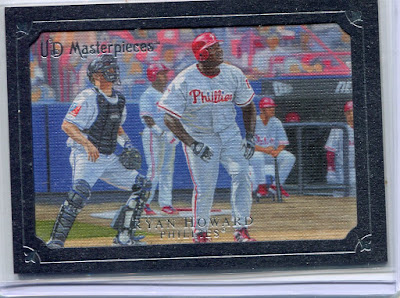 Numbered out of 50 the black parallel. This was when Upper Deck produced really nice looking cards. I wouldn't mind a type of set with these nice canvas looking cards coming out again. Might have to go back and buy some of these old boxes just to get a few more of these cards in the collection.

Thanks for reading and enjoy the week!
Posted by Brad's Blog at 5:57 PM 2 comments:

Odubel Herrera is injured which is unfortunate due to his hamstring strain. He will be back at some point but this guy who is also often injured is getting called up! 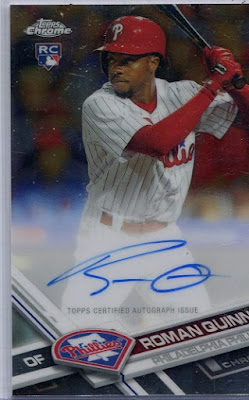 Roman Quinn! The known speedster. He doesn't have a lot of power but boy can he run! I like the Topps Chrome on-card auto looks. they are typically nice cards and tend to age well. I picked this card up at the last card show I went for about 2 dollars. Figured thats fair to get my first Quinn auto.

Thanks for reading and Go Phillies!
Posted by Brad's Blog at 4:03 PM No comments:

Before Toys R Us went by the wayside.(still kinda sad about that) They were grossly mismanaged but that's a discussion for another day. Anyway, sometimes the Wife and I would make runs around Toys R Us in the area strictly to buy the blister packs with the loose purple parallels.

Here are the parallels we got from 2017 Opening Day. 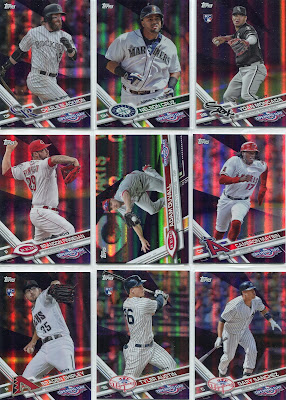 The best in this bunch are the Yoan Moncada rookie and the Gary Sanchez. Moncada might be worth something now that he's starting to play like a decent player for the White Sox. He had some crazy hype that was just too much to live up to right away. 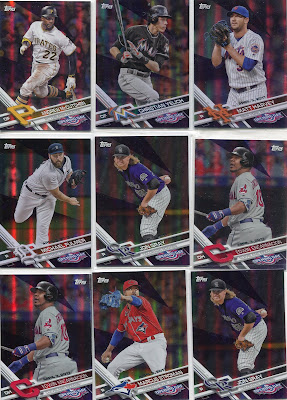 The Yelich is a nice hit. He has been really good at Baseball the last couple years. Last year won the MVP and deserved it and starting off really strong this year. 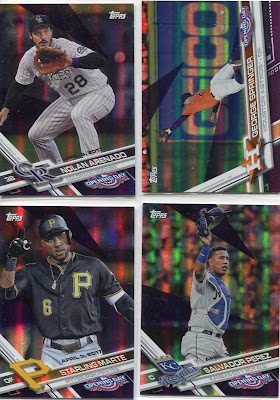 George Springer is a good player. He's a guy I would not mind having on the Phillies (probably won't happen but I would be ok with him starting in Center over Odubel) Arenado yea he's ok, the regular 30 HR 130 RBI machine.

These parellels are pretty nice and shiny out of Opening Day. I always say that I plan on selling them just rarely get around to it. Pretty sure I only sold 1 card out of this bunch (not shown Andrew Benintendi) Well if anyone wants to buy or trade for any that's fine, if not no big deal I'll keep them.

Thanks for reading!
Posted by Brad's Blog at 6:59 PM 2 comments:

A little bit of Belly!

Gotta  give some props to a guy who did not have a great post season or regular season for that matter last year and is coming out of the gates hot. He looks like he changed his swing and is seeing the ball much better through the zone in the early going. His numbers agree with me hitting 6 HR's in the first week and some change. (no I am not talking about Mike Trout, he only has 5 HR's!)

Some rookie cards of Bellinger... 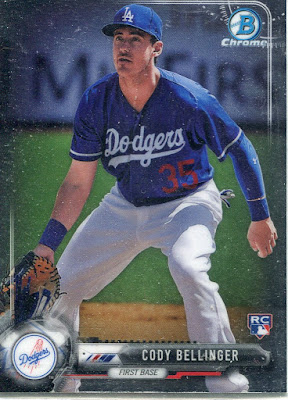 A base Bowman Chrome! 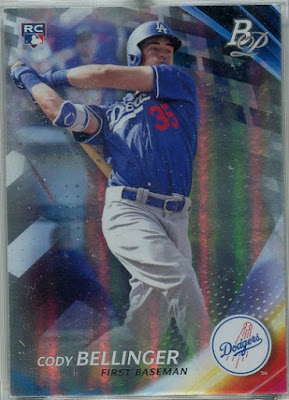 The Bowman Platinum base card! 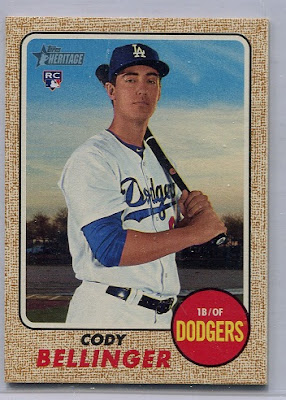 The crown jewel of my modest Bellinger Rookie card collection. The Heritage High mini numbered out of 100 (pulled from a hanger pack way back when). Always appreciate some good offense. He is a young guy too, many more HR's to come.

The Phillies bullpen didn't blow the game today! Hoskins carried the offense with the big 2-run HR but him and Harpers On Base Percentage are over .500 which is obviously very good.

Baseball is buzzing again in Philly. Even with the basketball playoffs about to begin with Simmons and Embiid everyone is talking Harper and the Phillies. Even though they lost today in brutal fashion, the offense has been hitting. Scoring 8 runs and losing is more on the pitching and defense then the bats. Harper has started strong obviously and I would love to see him stay hot as long as possible. My fantasy teams have been up and down, but it's a long season, I'll just coach them up (come on Trout hit some home runs!) 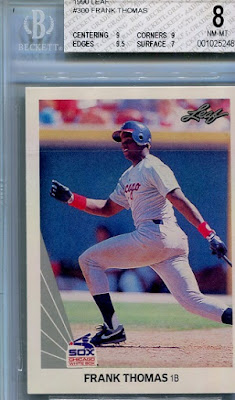 I picked this card up at the last card show. Yes I already had 1 but I'm a sucker for Frank Thomas Rookie Cards. I have a few of them. Can never go wrong with adding to The Big Hurt collection! 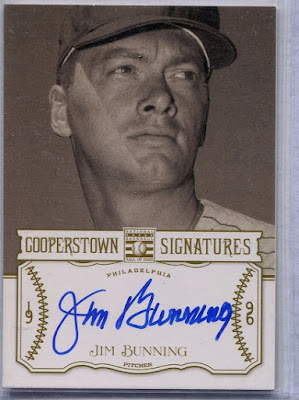 Also picked up this nice on-card Jim Bunning auto. Only my 2nd auto of his but I liked the look of the card and wanted a nice auto to add to the Phillies PC. Also, pretty sure I paid like 8 dollars for it so yea I was going to buy it regardless if I needed it or not.

Going to another Phillies game next week, looking forward to it!

Thanks for reading!
Posted by Brad's Blog at 7:17 PM 2 comments: