Happy almost New Year! Time flies when you're collecting baseball cards. Also, happy last day of Football regular season. Lots on the line for the Eagles this week. All week on the radio there has been Foles vs Wentz debate. I stopped listening at some points cause there is a zero percent chance the Eagles get rid of Wentz. Does not matter if Foles wins another super bowl (although that would be amazing I'm totally on board with this happening). I didn't spend as much as I used to this year on cards but I maintained focus and grew out the PC a good bit. I was able to complete a few older team sets (damn those high numbers are difficult) and get some cool cards that I deem keepers. 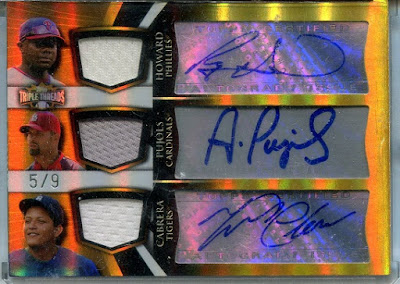 A gold auto of my main guy Ryan Howard and 2 undoubted future Hall of Famers Albert Pujols and Miguel Cabrera. This is my 2nd Pujols auto and first Miggy Auto. Cards this low numbered and more then a few years old don't pop up for affordable prices too often. Grabbed this one for exactly 100 dollars. I was and am happy with that price considering the star power and rarity. I know these are sticker autos but they didn't make non sticker autos for Triple Threads in those years (or any year for the Triple autos, seen a couple on-card regular autos though through the years).

Thanks for reading enjoy the time off if you have any!

The Phillies had Manny Machado in town the other day for a visit. We shall see if that leads to his signing here. Either way someone is going to give him a lot of money to hit a baseball. It would be cool if the Phillies got him and Harper. The Dodgers are the new Harper rumor since they just dumped a bunch of contracts to the Reds. This is all groundbreaking stuff I'm sure none of you have read yet.

Check out these cool on card autos I got recently! 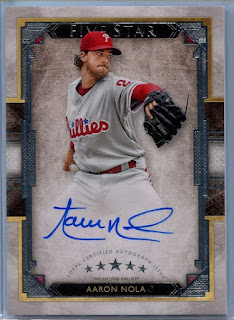 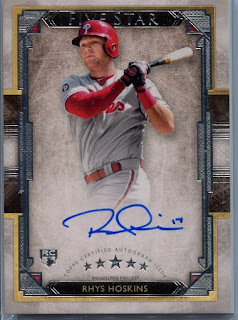 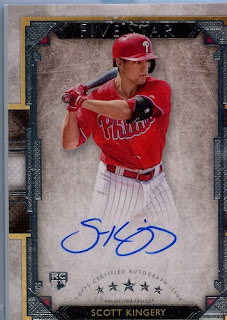 I'm liking the design this year of Five Star and nice clean on-card autos. Singles aren't that expensive either. Thank you to the breakers out there making these cards affordable for me. Can't wait until Pitchers and Catchers report!

I recently picked up this cool card of Roy Oswalt. I did really enjoy the Phillies year when they were rolling out Hamels, Halladay, Lee and Oswalt. A proverbial dream team of pitching.

This card is the die cut variation from 2011 Topps Finest numbered out of 10. 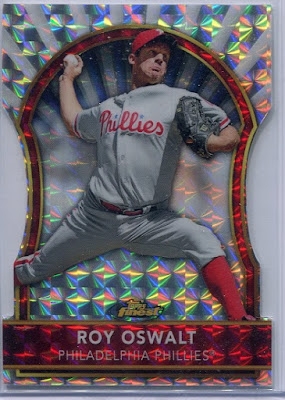 One day I'll find all the other Phillies cards. Just a quick post to say hello! Hope all is well!

Thanks for reading!
Posted by Brad's Blog at 4:17 PM 3 comments:

Ichiro officially retired this year. No doubt he will be elected into the Hall of Fame in five years. Pujols is still trucking along (I would be too for the money he's making) but clearly is not nearly as dominant as he was with the Cardinals. They will both be no doubter Hall of Famers.

I've been trying to grab some rookies of them since most aren't outlandishly priced and it fits into one of my side PCs. The same seller had both of these at the card show. 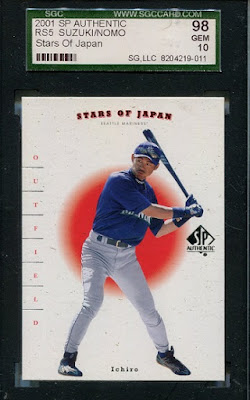 The back of this card also has Hideo Nomo which is pretty cool too. Graded GEM or whatever. I didn't buy them for the grades but I do like the protection of the cards. 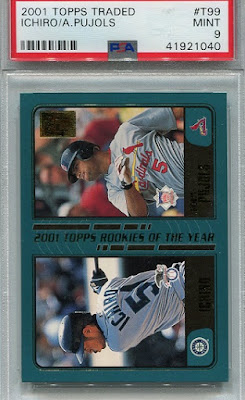 This card is pretty sweet. Two future Hall of Famers on one card. I do like a good vintage rookie with 2 guys on it and besides the Trammell and Molitor on one card you'd be hard pressed to find 2 better players on a rookie card (maybe Nolan Ryan/Jerry Koosman?)

Thanks for responding on the puzzle debate. Most of the puzzles aren't worth framing. We did glue together a Disney one that's 2000 pieces but to get a custom frame is going to cost too much at this time. Just started playing a new (to us) game called Sequence. It's fun lots of strategy involved. I always enjoy those types of games.

Fantasy Football playoffs start this week for most leagues. Good luck to you if you're in it. I made playoffs in 2 out of 5 leagues. I was hoping for 3 but the game didn't break right last week oh well. Hoping to win at least 1 Championship that would be a successful season!

Thanks for reading!
Posted by Brad's Blog at 5:59 PM 2 comments:

It's not jewelry, but it's Tiffany!

The Wife and I spent some time in Oaks PA this Saturday at the Card show. It's the same one they did at the Valley Forge Casino in King of Prussia but due to renovations to that space they moved the show to Oaks. (They are only a few miles apart venue wise) Parking was crazy, there was a Beer fest, a gymnastics competition and a Coffee and Tea festival all going on as well at the same time. The show itself I thought was really good. Lots of different dealers and lots of things to see. Tons of vintage and unopened and modern, anything to suit your tastes. I didn't have a crazy budget for this one but still managed to snag some cool cards. Going to show them in different posts but figured I'd start with the most expensive card I bought. 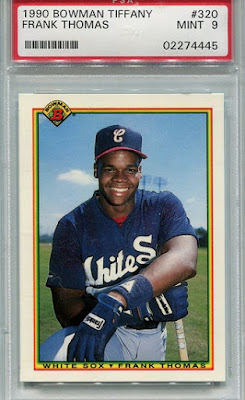 Spent 60 dollars for this beauty fish (Brian Regan joke). I now have the 1990 Topps Tiffany and 1990 Bowman added to the Frank Thomas collection. This card gives me currently 824 different Frank Thomas cards. Even though I have way more Ryan Howard relic and autos I believe my Thomas collection has more variety. Granted there is more years to collect Thomas and he has plenty of cards in newer issues as well. Still can't beat the classics. Always enjoy asking for prices on cards I can't afford. I saw a few 1952 Mantles as usual, PSA 1's were 9-10 thousand depending on how messed up they were. Nuts!

Unrelated note. Occasionally the wife likes to put together jigsaw puzzles. (I help but not really) Regardless the debate is this, after she completes them she doesn't take a picture or anything just looks at it for a second and then puts it back in the box and then donates them. I'm all for donating after finished but I think she should at least take a picture for keepsake. The jigsaw puzzles she does are either 1000 or 2000 pieces so they definitely aren't easy. The question is to picture or to not picture? What would you do?!

Thanks for reading!
Posted by Brad's Blog at 2:30 PM 4 comments: