Back to Back Championship!!

I have officially won my 2nd straight head to head Championship in Fantasy Baseball. I adopted a strategy early on the season that I wasn't sure was going to work. I ended up finishing 2nd in the regular season (out of 12) and getting a bye. I won both playoff rounds 6-5 and am officially the Champion. This league is tough because we limit moves. Only allowed 32 moves for the whole season so streaming pitchers would be difficult if any of your players get hurt. I ended up using 31 moves I held one at the end of the season just in case someone got hurt.

Original Roster based on draft pick round. I had first overall pick.

Draft wise I didn't do badly.  Trout was a no brainer #1 overall. Verlander was the right pitcher even though I traded him. The 4th-7th round I hit on all 4. Paxton being the worst but he was serviceable. Kershaw was great this year consistently pumping out quality starts. I took Grandal earlier then I wanted but catcher was so weak this  year. That worked out instead of having to scramble to put in a decent catcher.

Here is the Championship roster.

I tended to rotate Pederson. For a lot of the year I also had Verdugo and would just rotate them in and out. Kind of like Dave Roberts did in real life before Verdugo went down. Escobar was a great pickup he had massive offensive numbers. Yuli I had in April dropped him and then picked him back up when he got hot after the All Star break.

I rolled 10 starters most of the year. I did a poor job picking closers in the draft and one when went down I tried to salvage it early but wasn't successful so I traded Greg Holland and completely punted the category. Castillo was solid pretty much the whole year. He has a nasty changeup.

My big trade this year on paper I probably lost but it worked out.

Bryant was driving me crazy early in the year and I really wanted Rhys on the team so I probably overpaid. Joc would get hot now and then and Muncy when I had him was actually super solid. I ended up flipping Muncy for Vlad though. (trade done on June 6th)

Overall super happy to win back to back! Head to head leagues are tough! 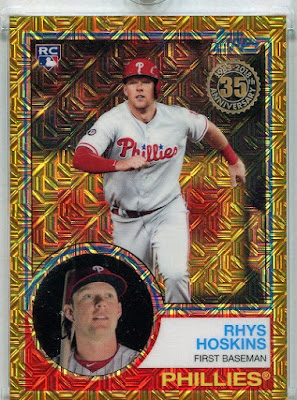 I snagged this card off of Blowout in a lot. I like Harper in a Phillies uniform and I like the look of this card. 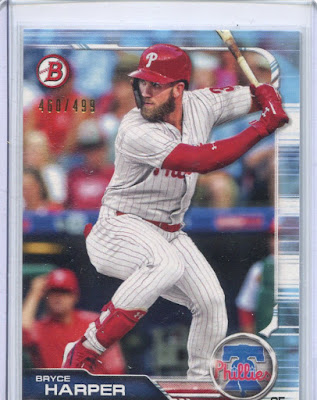 Clearly can see it's numbered. I have the base version as well (which unfortunately I paid way more for, should've waited that one out). Win some, lose some. Either way they are both PC cards. Harper's bat has really come alive this month. It's nice to see him hitting the way he should. His defense has been pretty solid all year too. I was at 2 games this year where he had really nice outfield assists. One guy he threw out at 3rd and one at 2nd. Both were really nice plays.

Despite Gint-A-Cuffs taking a year hiatus (I have no doubt it will be back strong next year) the wife and I decided to crack open 2 boxes of Ginter anyway. It was a fun break and we did pretty well odds wise. 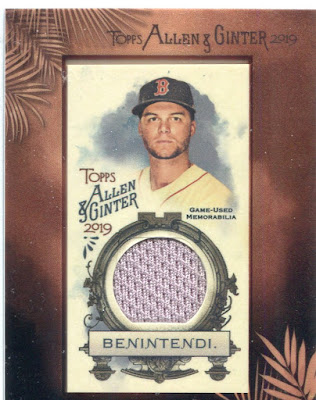 The framed relics are rarer as in the last couple years. Two years in a row hit the Benintendi framed relic. The three other guys are Miguel Cabrera, Yadi Molina and David Dahl. Two future hall of famers and an up and comer, not bad. 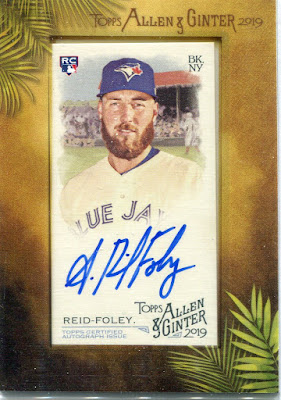 Also, got this autograph in the wife's box in the last pack. Saw the blue jays team and got excited.. oh well wrong guy but still nice to hit an auto in Ginter. 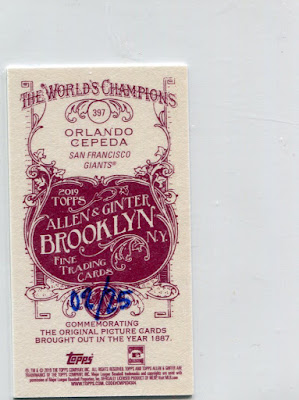 Hit a nice rare Brooklyn Back mini of Orlando Cepeda. Second one of these in 2 years after never hitting any. 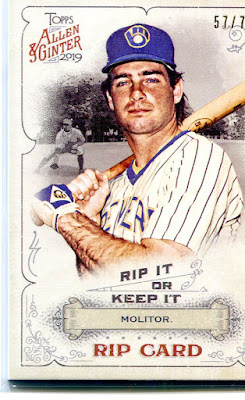 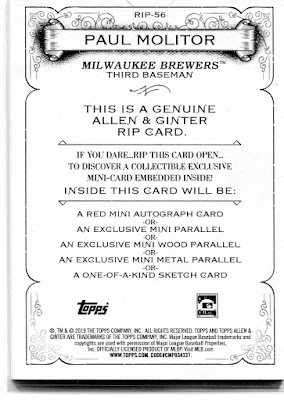 Hit this Paul Molitor rip card. This is now the third rip card that I've personally pulled. The other 2 were double rips and are still intact.. this one yielded.... 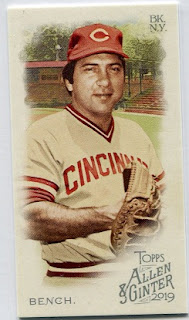 I am looking for these base cards if anyone has them to trade or sell.

I rarely say no to a discounted blaster. It's always nice to get cards cheaper that may have been sitting on the shelf a while or hiding in the back and never put out. Regardless of the reason happy to help open them for less then full price. (still waiting for the dream when all of 2011 Topps Update shows up one day!) 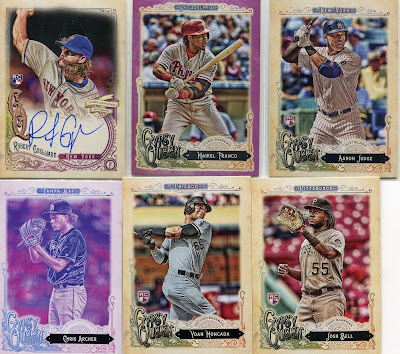 For one blaster I did pretty well. A On-card auto of Robert Gsellman. A numbered card of Maikel Franco (out of 250). Even though I feel he will no longer be on the Phillies at the end of the year or relegated to the bench he is still a Phillies card so therefore PC. A Judge, Josh Bell and Moncada rookie cards. The missing black plate Chris Archer. Solid amount of good cards in one box.

The wife so kindly picked up this blaster for me from Target (I think it was Target). I like Stadium Club because the cards really are nice. I wish box breaking wasn't so expensive. If Stadium Club had no autos that wouldn't bother me with the full bleed photography and the parallels would be enough to keep me opening it at a discounted rate. I know that's not going to happen but one can hope. 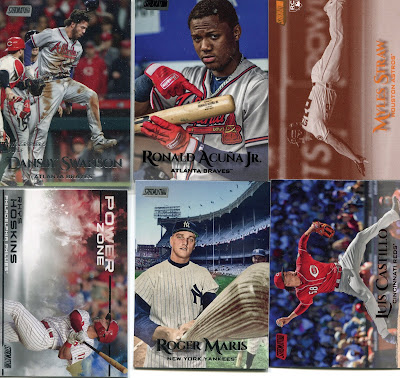 Got one of my PC guys in Rhys Hoskins which is always nice. The Maris I just thought was a great picture. Luis Castillo has been a solid addition to my fantasy team this year so no complaints about him. The Sepia Straw is a nice looking card.

The Dansby Swanson is the Photographer's proof parallel. They are 1 in 513 packs. Pretty psyched to hit something so rare in 1 blaster box.