I sent out a few packages the past week, so I hope they all made it safely! I still have one for Junior Junkie I just don't know if I have the right address so please email me! I hope I got everyone I owe or have been trading with semi regularly. I want to be more active just been a bit busy with fun life stuff. Today's the wife's birthday so should be a good day! In Honor of that.. I will show baseball cards! 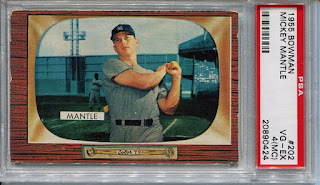 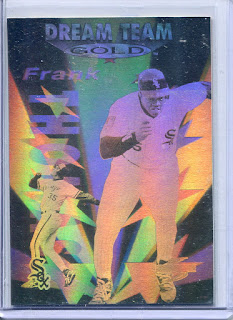 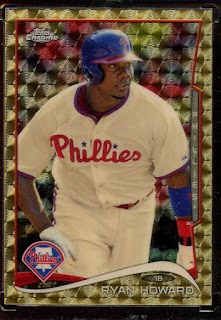 Just 3 awesome cards locked away in the PC! Some Vintage, some 90s shininess and some Superfractorness (made that word up).

Hope everyone had a good June, Thanks for reading!

Been busy this week so just a quick post tonight. Hope everyone is surviving the severe thunderstorms.

I got this card for cheaper then the grading fee, already encased! 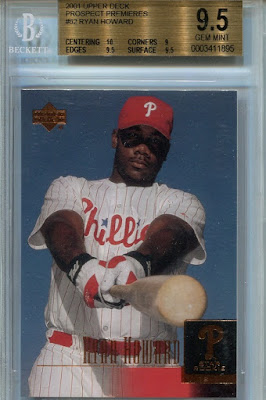 Of course I have one ungraded too.. but nothing wrong with a nice rookie!

Thanks for reading!
Posted by Brad's Blog at 7:49 PM 2 comments:

At the card show a few weeks ago, I was looking at the guy's table with sealed wax. He had this one for 9 bucks. I told him I would think about it and come back, then he offered me that one, 1989 donruss and some football box for 10 bucks. So of course I said yes! I still haven't opened the other 2 but this one is done!

The cards stuck together some, but most of them came away unscathed. I have it currently sorted into teams so if anyone needs any particular team let me know and you can have it!

Let's start with the foils. I had to scan these in as documents because the photo scanner was picking up each one individually. 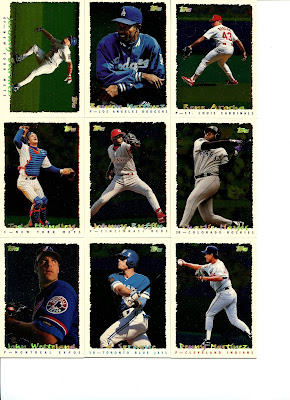 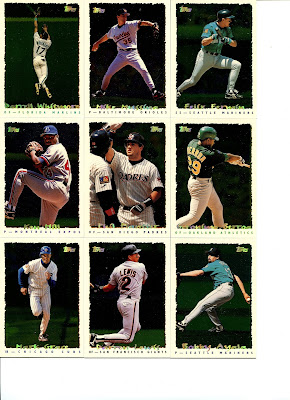 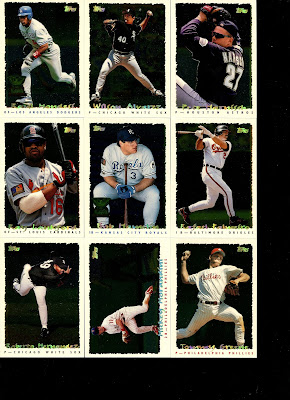 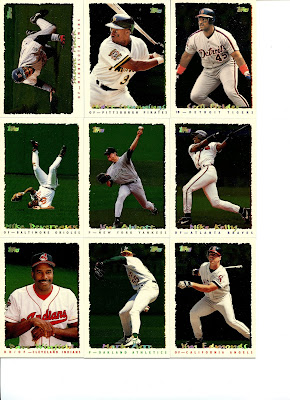 The photography in this set is top notch. They use some cool visuals as well with multi player pictures and stuff like that. Nothing beats that Mike Deveraux picture as well. He stood on his head!

The first day issue's come one per box.. hit a good one! 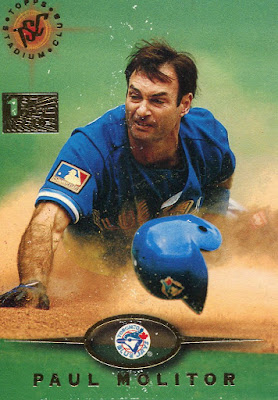 Hall of Famer and current Twins Manager Paul Molitor. He killed the Phillies in 1993 but he's hard to dislike. The card did get a little damaged when getting unstuck and Paul does look angry about that! 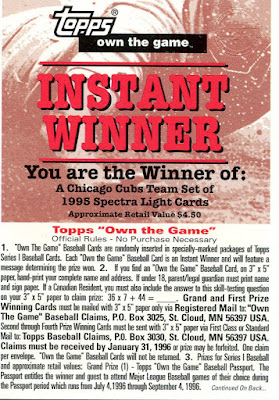 I won I won!!! Who knew a box that is 20 years old and I'd still hit a redemption! I would've ran up and down the stairs and had a little party if 10 year old me hit this! Party would have included sega genesis and ice cream cake. I don't know what the spectra light cards look like but I imagine they are shiny! Even Topps knew back then, shiny sells!

Thanks for reading!
Posted by Brad's Blog at 4:58 AM 2 comments: 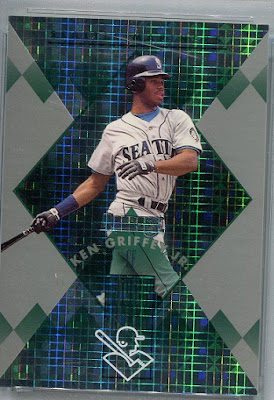 An Auto and a Plate!

Unfortunately, it's not an autographed plate. I don't believe I have one of those in my collection. One day! Hope everyone in the north east isn't getting overheated out there. It's nice and summery now. On the upside, I much prefer hot to cold so that's fine with me and Rita's water ice is readily available.

Completely unrelated note, anyone know anything about septic systems? We are house hunting and this one house we like, we were told the drainage field is partially covered by the driveway. Is that a legit problem or is that whatever? I grew up with public sewage so I never had a septic system. Any of you people out there with knowledge please share :) Thanks!

Ok back to important things like baseball and baseball cards! Both of these cards from that local card show I was able to go too a few weeks back.

A Ryan Howard auto I didn't own: 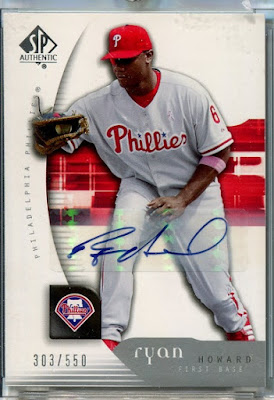 It is a sticker, but it's a nice looking card overall. Set me back 10 dollars (the seller had a sticker price of 15, I offered 10, he wouldn't budge so I said ok thanks and started to walk away, then he changed his mind!) Tough negotiation I know! 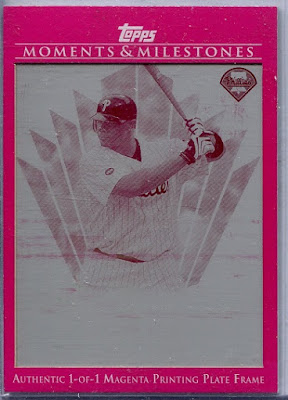 This plate is framed, I have a ton of the black's numbered out of 25 from this set so I figured why not add a plate! It's nice and magenty.

Thanks for reading and thanks for the other info if you know something!
Posted by Brad's Blog at 1:22 PM No comments:

I have a pile of cards I still need to send out. I've been extremely busy and for not sending cards back I apologize. I did not forget just have a lot going on (all good!). I'd like to try and post more frequently but if I maintain the 3-4 day average I'll be pretty happy about it. My work volleyball league has started back up and that's been fun. I enjoy it. This whole paragraph has almost nothing to do with baseball.

I feel like I got this card for a steal.. it was 8 bucks.. poorly listed and bad timing to end. I guess no one else was watching! 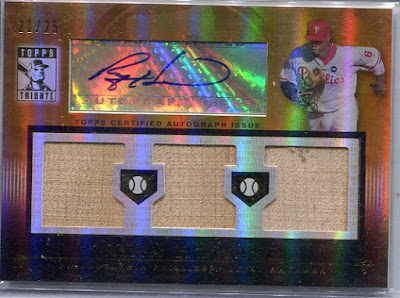 Anytime I can get a triple relic auto from Tribute numbered out of 25 for the price of a lunch.. count me in! I don't really buy these high end boxes (at least not yet) so super happy to get this card added to the PC!

Also, fantasy baseball update. I have two teams. One is in dead last.. and terrible, I might be stuck there. One is in 2nd and fairly solid. That team is the all baseball card team (as I like to call it). It has Trout, Harper, Bryant and Gallo! Maybe I can convince the commissioner to make it a keeper league.

Anyway, hope all is well! 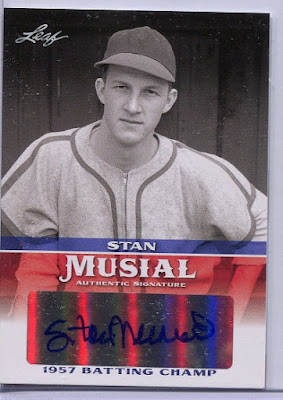 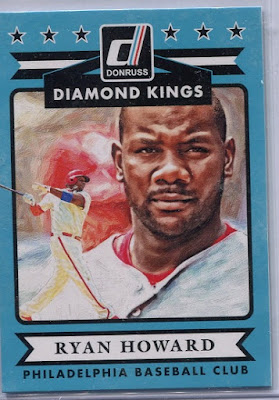 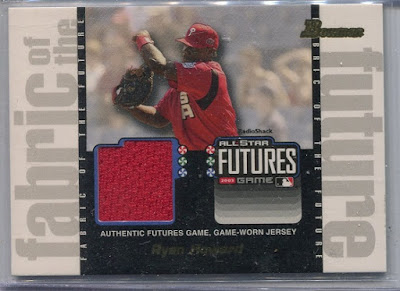 Thanks for reading!
Posted by Brad's Blog at 7:41 PM 2 comments: