I've been meaning to post this week just been busy. I have received a few packages from people. I will get to scanning and giving props of course! 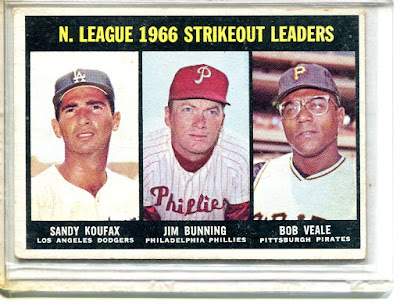 I always liked the Leader cards from the 60s. Such star power and not very expensive. Always nice when a Phillies player makes the list too next to one of the greatest lefty pitchers of all time.

Thanks for reading!
Posted by Brad's Blog at 4:40 AM No comments:

I channeled Aerosmith for my post title. One of my favorite sets as a kid (and now) is 1995 E-motion. I do have the base set and most of the inserts (probably missing a couple N Tense's). There are no autos or relics to be had but it's still a real fun box to open. 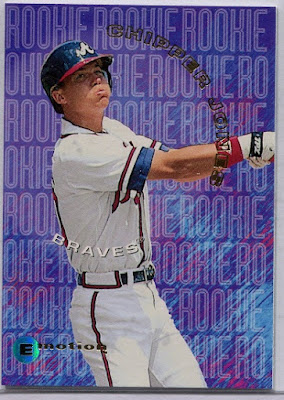 Soon to be hall of famer Chipper Jones rookie card. I think he gets in for all he did for the Braves on all those playoff teams. As a Phillies fan I respect his accomplishments but I don't particularly like that he crushed the Phillies a lot. 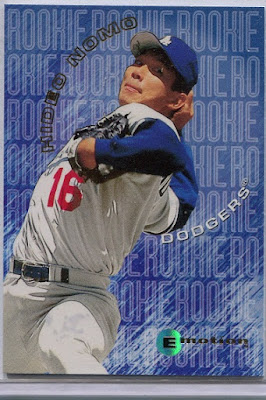 Mr. Nomo, the first Japanese pitcher to make a huge splash in MLB. He paved the way for all the future players to come over and show off their talents. 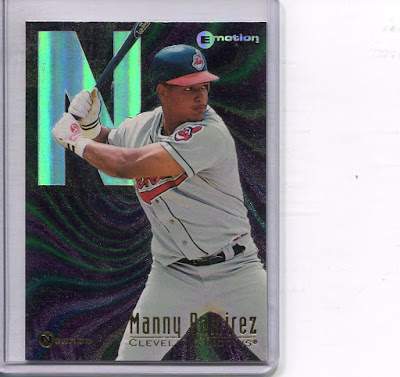 One of the nicer inserts that only came one per box. A Indians Manny Ramirez N TENSE!  He was quite the hitter throughout his career. Unfortunately, tainted by those steroid tests at the end of his career.

Bonds, Gwynn and Juan Gonzalez Masters insert. This is a Who's who of the mid 90s'. I like the picture overlays on these cards.

Thanks for reading! Whats your favorite 90s set?

Two Cards out of ten!

Here are 2 of my recent Ryan Howard pickups! I'm glad he hit his 9th Home Run the other day. It moves him into 80th all time on the Home Run list. (I believe tied with Lance Berkman) Not bad company to keep. This is clearly Howard's last year unfortunately. He doesn't have the bat speed anymore to hit the good major league pitchers. On a bright note, I organized my base cards into year so I can finally figure out what I'm missing there. I will get the list together and make a new tab on the blog soon.

I was thinking of scanning the hits for that page too just to have them all documented and in order. Need a good chunk of time to do that though so we'll see when that happens.

Here are the 2 cards that are the subject of this post! 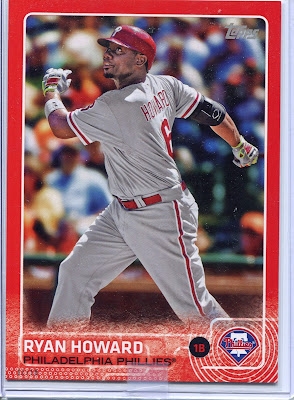 This card above is one of those 5x7 cards from Topps. I got it on ebay though at a decent price. Not 100% sure how people ordered them from Topps. I think they came in sets and people were piecing them out. It's in a sleeve so its protected but I haven't decided how to display it yet. It's currently sitting with my Javier Baez box topper auto from Gint-a-Cuffs last year. 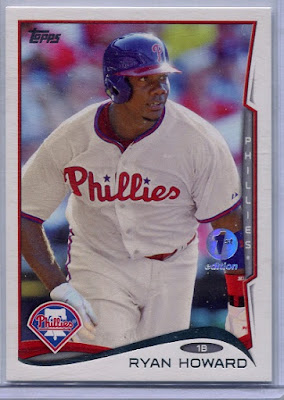 This one is not specifically numbered but the print run is 10. It has a little first edition stamp on it, so it must be cool! I watched this on ebay for months until the price came down to what I thought was acceptable. I wasn't competing against anyone else or it would've been purchased much faster. Topps sure does love the parallels. Maybe one day I'll open a case of Heritage and look for all the parallels!

Made a big trade!

Not with cards mind you, but in Fantasy baseball! Pre-season I traded my 3rd (Chris Davis) , 4th (Kyle Schwarber) and 5th (Corey Seager) round picks for Kershaw, his 10th (Ian Desmond) and 12th round picks (Joc Pederson). Kershaw was obviously the key. He's been flat out amazing.

So I traded him.. I traded Kershaw and Jose Fernandez for Kenta Maeda and Mike Trout! This is a keeper league so I will have Trout on my team for the next 3 years! Super psyched to have in my opinion the best player in baseball anchoring my team. I will have to re-build my pitching staff a bit but now I can carry George Springer and Trout into next year to start off my hitters. I'm feeling good about it!

I see Topps Archives and Finest have come out recently. I've yet to get any but maybe sometime in the future. I feel Archives is a bit overpriced and has too many parallels. I like parallels that are shiny not just parallels for the sake of it (that may have been a contradictory statement). I do plan on picking up the 1985 Aaron Nola auto. I love that design and I think the auto looks real good. 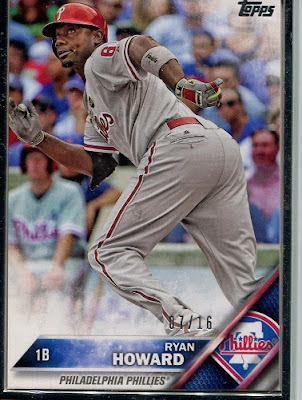 I was able to find the Topps Metal card out of 16 earlier this year on ebay. They are nice cards, very thick and sturdy. Similiar to the metal framed autos from Topps Museum (only have one of those). It's a shame Howard's career is winding down so poorly. Sports talk wants him released but the Phillies haven't said much of anything. I'm sure he'll just get less playing time. The Phillies aren't contenders this year anyway so I bet they just let him play out the last year of the deal and do the buyout for the last year in the offseason. Obviously hes a big part of my PC but I hope he retires and doesn't try to hang on some AL team. It'd be nice to have a star that stuck with the Phillies his whole career and brought them an MVP and World Series victory.