I have acquired my third rip card that is complete intact. I have debated ripping the one (Salvador Perez/Eric Hosmer double rip) I doubt I'd ever rip the Clayton Kershaw/Kenta Maeda double rip. This one is going straight to the Ryan Howard PC. These are hard to find so thankfully I was able to work out a price I could live with with the seller. 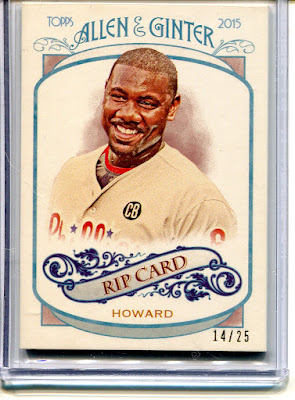 This is the third year of Topps Chrome Sapphire. The first 2 years Topps released them as full sets with guaranteed Superfractors and other parallels included. The cost was pretty high. If I remember correctly 1,500 at release and then came down some after that. I never had any designs of buying the whole set but I picked up just the Phillies base team set of both years. They are nice looking cards. This year Topps changed up the format and went with more of a box break with autos included. It 199 a box with 3 autos and 1 in 4 chance of a Superfractor. Seems like most of the breaks I saw provided some value. I just wanted the Phillies team set so I didn't buy any. I did manage to piece the Phillies team set together through a couple purchases. 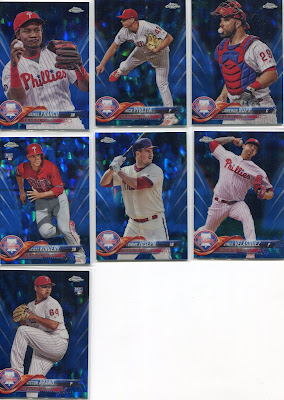 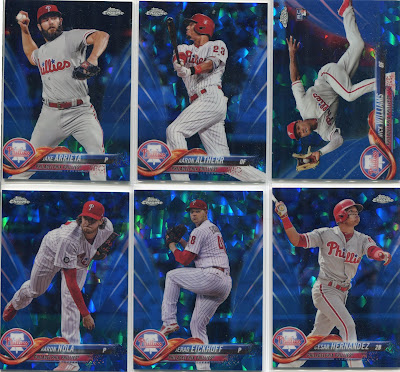 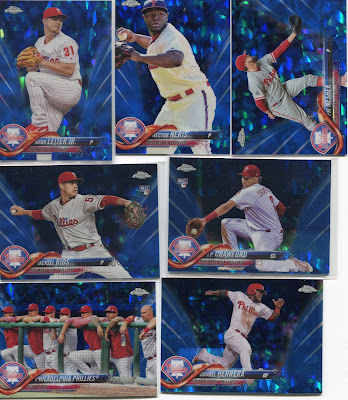 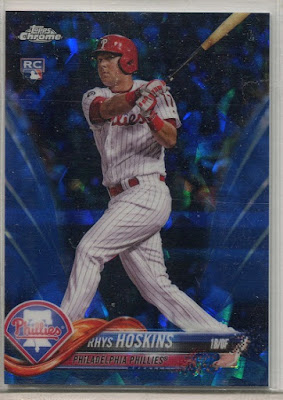 Rhys Hoskins is really not that dusty, totally on my scanner. Sharp looking cards. They will fit right in with my other Sapphire Team sets. The most expensive card was the Hoskins (12.00). I have a decent rookie card collection of him and one auto at this point. Not trying to go overboard but I hope him and Harper power the Phillies for years to come (I may or may not have insider information on Harper.. (I do not))

Thanks for reading!
Posted by Brad's Blog at 6:57 AM 2 comments:

I picked this up a while ago but I neglected to share with my many many devoted readers. For this I apologize, but I will make up for it by showing you the good cards now! I always like to check out the card aisle in Target and Wal Mart. In my area its really hit or miss though. Occasionally get lucky and get a good blaster to open but often nothing. Always on the lookout for the elusive 2011 Topps Update that was never put out! Have yet to have that happen though.

Here are the contents of this break: 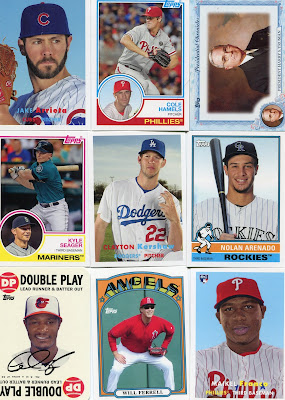 Hit a couple Phillies and a future Phillie (Arrieta). 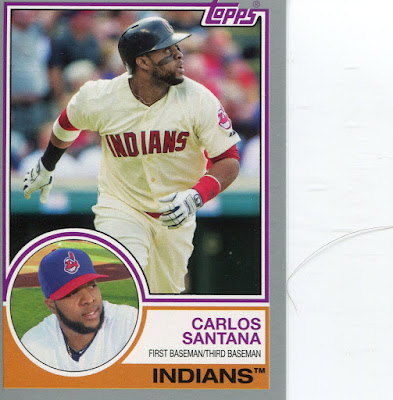 I was lucky enough to get a numbered card of the best on base percentage guy ever Carlos Santana (Gabe Kapler's words not mine).

Now that the Eagles officially suck again (Thank god they won last year) Harper mania is in full effect. I am totally on board overpaying a 26 year old superstar. If it brings them closer to a World Series and back into contention do it. No reason to wait, they have no payroll right now and the only guys making real money are on super short term deals.

Thanks for reading!
Posted by Brad's Blog at 7:31 AM 2 comments:

Season is obviously over. The team with the best record in the regular season won the whole thing. Not overly surprising they were obviously very good. All the talk on the sportstalk radio around here is Harper or Machado. I have a sinking feeling that we aren't getting either. I would love both of course (hey not my money). The Sixers completely whiffed on everything this off season. The Phillies might too. Either way we still have Hoskins who I obviously like. The pitching has to take a step forward this year. Nola was a beast but after that it was just cross your fingers that they don't get blown up.

Check out this 'silk' card! 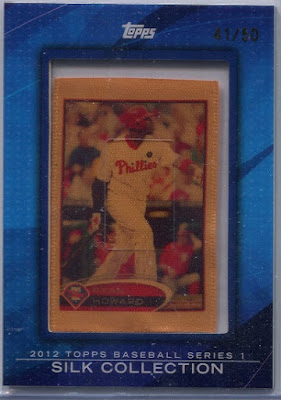 2012 Topps was a good year. Nice design good looking parallels. I have a few of these silk cards now and would not be opposed to adding more!