Hit up a card show today!

It was good timing. I had won some money at the casino the night before (hit the nuts three times in a row, went well!) I discovered randomly that this card show exists in Newark, super close to us. The admission was 2 dollars. My wife and I went just to check it out and see if anything caught the eye. Most of the dealers there I had seen at the Philly Show in King of Prussia. It was nice to see the setup in a much smaller venue. It flowed well and everyone was super friendly and we had a really great time! Only had time for a couple hours but it was enough to see most of the display cases. There was a multitude of dime boxes for collector's too. Just didn't have the time to fish through all of them.

I'm going to start the card show show-off with a bit of a trifecta from 1983! I picked these all up from the same seller for a grand total of 9 dollars! I thought it was a great deal and was quite happy. We ended up chatting with the seller for a little bit and come to find out he's Rick Probstein's dad. (For those that don't know Probstein123 is one of the biggest sports card sellers on ebay) Not sure if anyone else there knows him but I'm a fan of his dad, super nice guy and easy going when it comes to negotiating a price!

Check out these rookies! 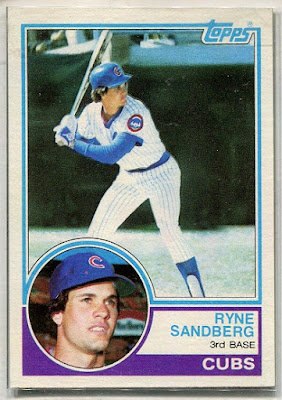 The current manager of the Phillies Ryne Sandberg! He had a great career with the Cubs, I'm hoping his managerial career turns around. I don't think he survives this current regime without winning. He hasn't had a ton to work with but that's the way it goes. Manager gets the blame regardless. 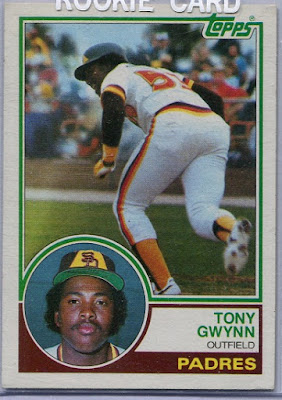 Mr. Tony Gwynn! I know tons of you out there know this guy was a hitting machine. One of the best ever. It's a shame he passed away so young. 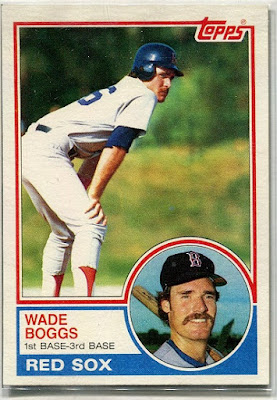 Boggs was known for his superstitions. He ate chicken before every game (Jim Rice once called Boggs "chicken man"), woke up at the same time every day, took exactly 150 ground balls in practice, took batting practice at 5:17, and ran sprints at 7:17.[11] His route to and from his position in the field beat a path to the home dugout. He drew the Hebrew word "Chai", meaning "life", in the batter's box before each at-bat, though he is not Jewish.[19] He asked Fenway Park public address announcer Sherm Feller not to say his uniform number when he introduced him because Boggs once broke out of a slump on a day when Feller forgot to announce his number.[20]

It seemed to work, he did make the hall of fame!

We got some more cool stuff, which I will be posting this week hopefully!

Thanks for reading!
Posted by Brad's Blog at 5:56 PM 2 comments:

The card says so on the back.. but it wasn't that super rare because I found it on ebay for about a dollar! 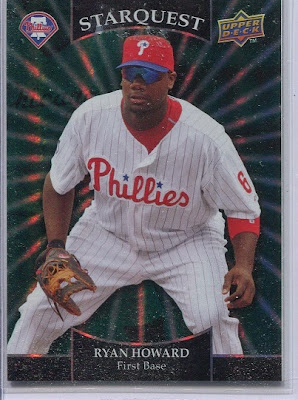 I do like the look of the card though! The pinstripe uniforms definitely work.

Just a quick post this morning, hope everyone had a nice long holiday weekend!

Thanks for reading!
Posted by Brad's Blog at 4:19 AM No comments:


Of course it's Ryan Howard! 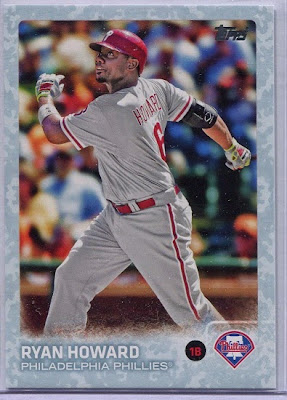 I wonder how this would look in a chrome finish. I've been reading about Topps Chrome and I heard they are messing with the color structure. Hopefully this year the boxes will be more fun to open. The boxes last year, some of them didn't even yield one color refractor and the year before you got at least 2 maybe 3 or 4 depending.

Still busy and I know I owe people stuff, trying to catch up soon!

Thanks for reading!
Posted by Brad's Blog at 4:30 AM 4 comments:

Been a crazy week but I am finally back. I spent the last week in Manhattan for work. Personally too many people. I like the suburbs. Happy to be back home and actually soon to be going to a Phillies game! Love some afternoon tailgating. It's also a slightly belated birthday celebration! I officially turned 30 two days ago! Who knew?! Anyways.. Mr. Bob Walk and I have had been blind trading for a few months (year?) now. Its always fun and he manages to find something I haven't seen before. I hope my return packages are just as nice.

The Grady Sizemore is the hard to find Black parallel out of Topps Series 1. The Krukker is a nice relic back when they were still cool and not one every pack.

This is one of my first mini cards. I didn't buy any so everything has to come in trade. It's nice to have 2 Rupp autos (my first two!). I wish Panini would share a license with Topps. I like some of their card designs but lack of logos hurts the brand overall. The purple shine does pop though.

Thanks for reading, Go Phillies!
Posted by Brad's Blog at 9:51 AM 3 comments:

Look Ryan Howard won Rookie of the year! Says so on this card.. 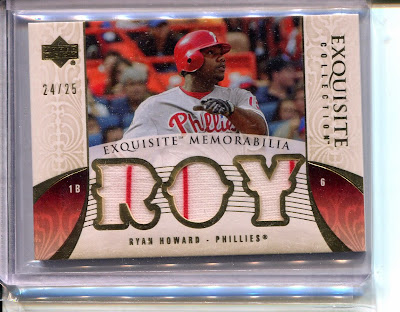 A nice piece when Upper Deck could show logos (or did show logos and just didn't pay MLB) either way Exquisite is a nice set. I wonder how much this card would've gone for in 2005-6.

His rookie season was quite good..

In only 88 games he hit 22 HR's and had 63 RBI's. Surprised he won the award not playing more but of course it was well deserved!

Here's another rookie I picked up! 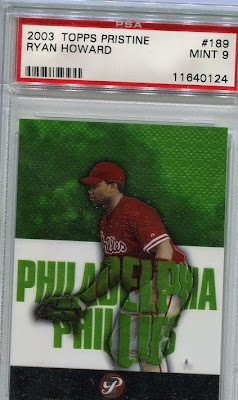 A nice numbered rookie that was a whole 99 cents! I'm pretty sure the slabbing fee alone is more then that so I'll take that deal any day.

Still busy with work and all but slowly catching up!

Thanks for reading!
Posted by Brad's Blog at 2:27 PM 2 comments:

Back on the saddle!

My blog has been dark for a few more days then I wanted it to be, but that's what I get for not scheduling posts. My wife and I attended a friends wedding in Chicago. We didn't have time to do any sight seeing (flew in Friday, Wedding Saturday and flew out Sunday morning) but that's OK, I've seen most of Chicago since I lived on the North side for 2 years. I did get her to experience her first Steak and Shake. That went well! I am mostly back but I haven't scanned anything new. I still owe some cards to people. There will be a delay in getting those out due to work but you will receive something! (probably in a few weeks)

Here's a card I scanned a long time ago.. then traded it and never showed it on my blog. It's sitting in a nice PC now I'm sure. 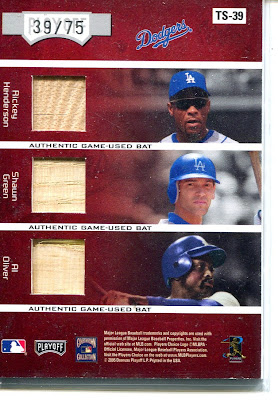 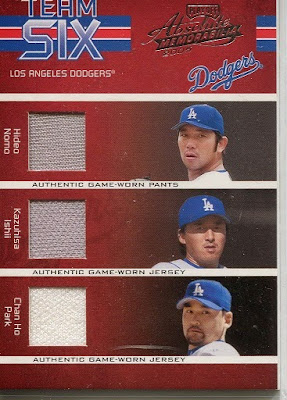 A six way relic of Hideo Nomo, Kaz Ishii, Chan Ho Park, Rickey Henderson, Shawn Green and Al Oliver. I did like owning this card but I thought it would work better in a Dodgers PC. (There are a few of you out there!) If there is a Phillies version of this out there I would be interested! One Hall of Famer, and Nomo definitely make the card. Nomo is the trailblazer for all the overseas people. Without him, who knows if we'd ever see Matsui or Ichiro! I'm glad its generally accepted now to have a nice mix of international and local players on a team. Makes for some great baseball!

Thanks for reading and hope to be back to regular posting soon!