Or re-hash more then a review. My friend and I went to Phillies Opening Day again! This year was awesome. The place was packed and the crowd was really into it. We arrived around 11:45ish and parked in the K lot at the Linc (where the Eagles play) under the solar panels. The lot is directly across the street from the stadium. We brought some adult beverages and had hoagies for food. Didn't really feel like dealing with charcoal to put the whole grilling together. Hoagies are always delicious and a nice alternative. Two other friends met up with us since they live close by and hung out for a bit before the game. They went into Xfinity live to watch after tailgating. (For those that don't know Xfinity is a bunch of restaurants and bars in the parking lot of the Wachovia Center, they show games on a massive screen and everyone can watch)

We headed into the game around 2:15, the line to get in was insane. The metal detectors really slow the pace down. 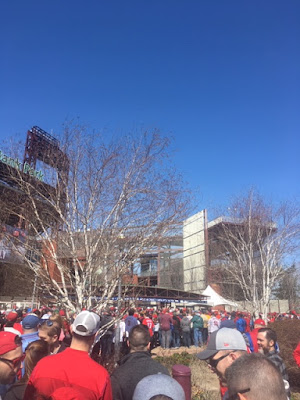 All the lines were open but there is such a mass of people everyone is in line but no one is really in line correctly. They should hire me to fix this problem.

We were able to get in before the first pitch thankfully. We did miss the guy parachuting in though but that's ok. 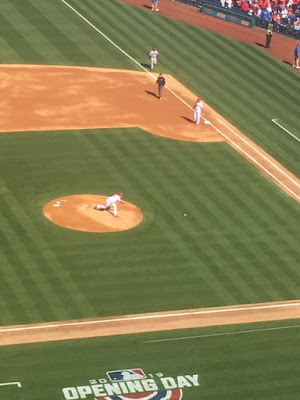 This is Aaron Nola warming up. We were sitting 3rd base side (obviously) in the upper deck. Good view of the field so no complaints there. 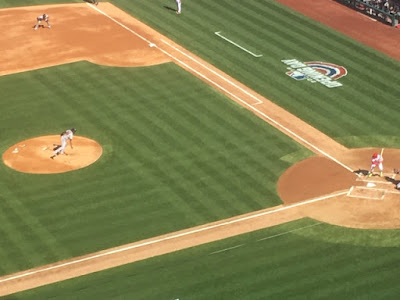 This was Harper taking a pitch in his first at-bat. For his first at bat everyone stood up the whole time which doesn't happen too often for an at-bat in the first inning of a game. He grounded out to first base and then everyone clapped for him. Never seen that before at a baseball game. By the third at bat some yahoo behind me was yelling to trade him. Gotta love Philly. Overall view from our seats. 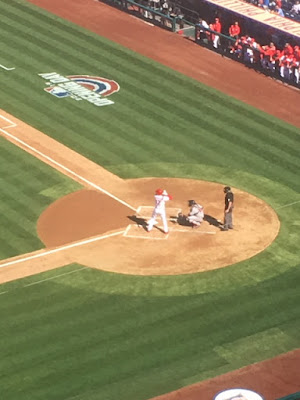 My guy Hoskins in his first at bat. I didn't get a picture right before he cranked that Grand Slam!

Had an amazing time at the game. The weather was great, people were genuinely excited. Nola pitched great like most of last year. McCutchen started the game off with a bang when he hit that HR right away. Some inebriated fellow behind us went nuts and kept yelling that he had 1,500 dollars on the game. Quite amusing. I didn't see any fan incidents or anything bad at all.

Side note, this was only the 2nd Grand Slam I have ever seen a person. Last time I saw one live was in High school against the Dodgers when none other then Travis Lee hit it. I remember the game well because Gary Sheffield almost got tossed for arguing with the umpires.

Did some digging, found the box score to that game!

Travis Lee hit it off of Eric Gagne!

My drought of not seeing a Grand Slam is over!

Thanks for reading, cheers to many more games and Phillies wins this year!
Posted by Brad's Blog at 12:50 PM 1 comment:

Super psyched for tomorrow! The real season begins! Spring is in the air! (despite it being cold) I'm currently watching a documentary called Fastball and the first scene has Justin Verlander talking about baseball! I have my last fantasy draft tonight at 9 pm, all the injury news is out. Some insignificant (sorry Steven Souza Jr, sucks professionally and I would not wish that on you but for fantasy purposes doesn't matter) some significant (Francisco Lindor, hurt again! Might not be his year?) All I know is I'm a big Phillies fan and I already have Harper and Hoskins on 1 team and Hoskins on another, so double reasons to cheer for my own team!

I'll be going down to the stadium for the first game. I hope its buzzing like it was in 2008. Everyone hanging on every pitch and goes crazy when good things happen. 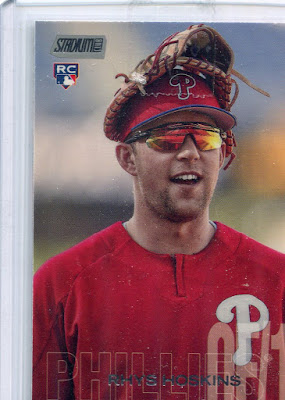 I was able to snag the Hoskins RC image variation for under 20 dollars. Pretty happy about that and the picture is fun. 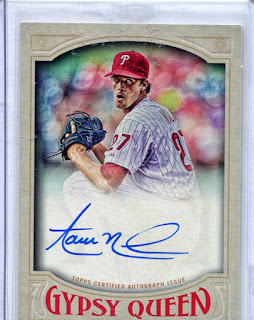 Can't wait to watch this guy!

I've been on a Nola kick lately. I've amassed a few autographs some rare some not so rare but he always signs with a nice signature. He obviously is currently the ace of the pitching staff and is the Opening Day starter. Harper is seemingly getting it rolling in spring training. I hope he has his timing down when the season starts in FIVE days! I did my first fantasy draft before the Japan Series. I had 12th pick which is fine. I ended up getting Harper, Judge, Hoskins and Carrasco as my top 4 picks. I wanted Judge or Harper and when they both fell I said screw it and took both.

Here are the trio of autos I picked up at the last show. 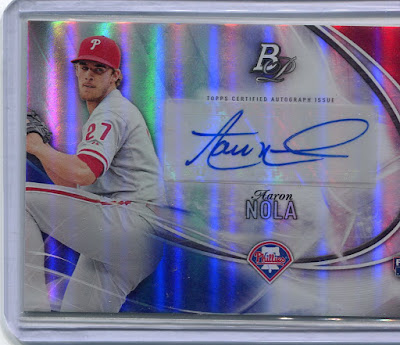 This is a sticker auto but its a nice Rookie card auto from Bowman Platinum. 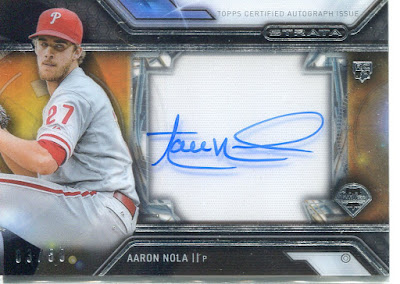 These Strata autos are really sharp. The window around the auto is acetate. 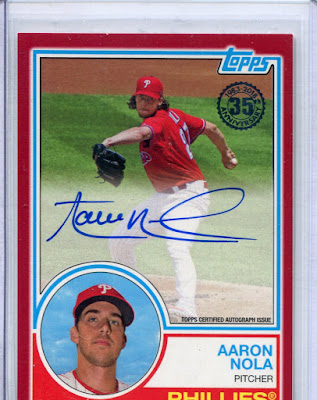 I really liked the look of this auto. The red on red make it pop quite nice.

Pretty happy with the 3 pickups. Excited for the upcoming season. Even happier the Phillies signed Harper now seeing that every single player is signing an extension before hitting free agency.

Thanks for reading!
Posted by Brad's Blog at 9:11 AM 2 comments:

I saw this card in one of the showcases in the Philly show. I asked the dealer to look at it outside the case and it is quite nice in person, so I decided right then and there I would buy it. Very tough decision making! 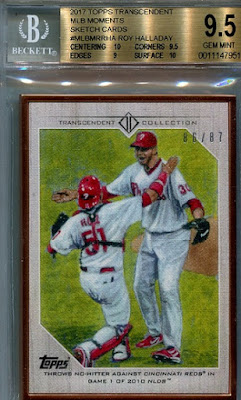 It's the Roy Halladay/Carlos Ruiz sketch card commemorating his no-hitter against the Reds in the playoffs. I remember watching that game in the Tropicana in Atlantic City since we were down there to celebrate my sister's birthday that year.

Thanks for reading!
Posted by Brad's Blog at 8:02 AM 3 comments: 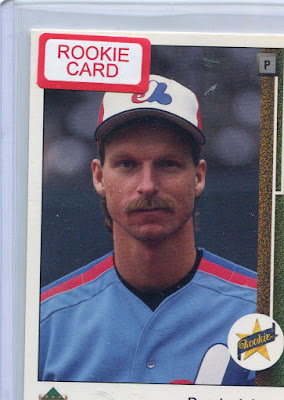 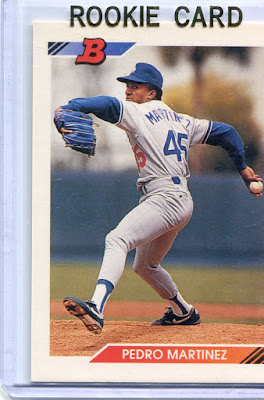 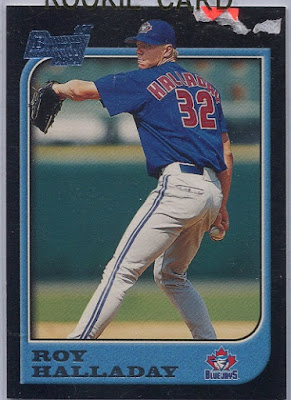 Thanks for reading!
Posted by Brad's Blog at 5:36 PM 2 comments:

I recently picked this card up off of ebay. I really enjoy Stadium Club even though the technical value isn't there. I did enjoy the one box I opened last year. It was fun to open and the cards are pretty. The chrome cards come one per box. I'm really on the hunt for the gold minted variation. I saw one on ebay early on and got outbid but I haven't seen one since. If you have one or know someone who does please let me know! Willing to trade or just outright purchase. I'm flexible when it comes to that.

Check out Rhys rounding the bases, hopefully lots of jogging around the bases this year! 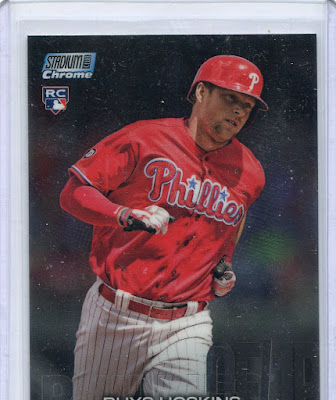 I chopped his name off via scanner, but that's ok I am not a professional scanner.

Eagles free agency has been a nice distraction to leading up to baseball. Howie is usually pretty active and this year was no different. Grabbing Malik Jackson and DeSean Jackson on day 1 (or the legal tampering period which is dumb) (we all know the deals are in place well before free agency opens)

Thanks for reading!
Posted by Brad's Blog at 6:25 PM No comments:

I'm glad my prediction in my previous post came true. He did sign somewhere at some time! It just happens to be the team that I am clearly a fan of and have been most of my life. Went to the Philly Card Show on Saturday. The casino finished the renovation on the floor. The layout was basically the same though but that's okay, I actually like the layout. Bought some stuff passed on some stuff and saw some stuff I usually don't see in person. Memorably the Mickey Mantle Ken Griffey Dual signed card from 1994 Upper deck. PSA 8 and signatures were authenticated. Of course he wanted 4 grand so slightly out of my price range but still fun to see.

I'm super psyched for the Phillies season and fantasy baseball season. I already had tickets to a few games before the Harper news. Hopefully be going to a couple more throughout the year as time permits. Thankfully already had opening day tickets! It will be awesome with the sell out crowd, rocking like its 2008! 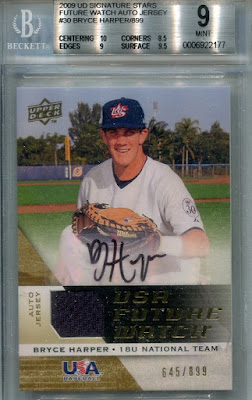 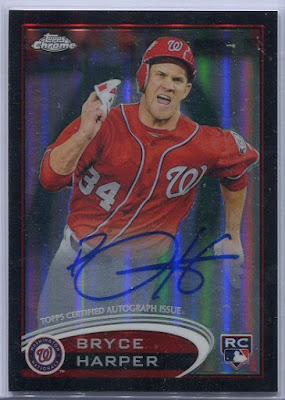 These are the 2 Harper autos I own. I bought the UD Signature stars while waiting for the Chrome redemption (took 2 years).

Thanks for reading! Almost baseball season!
Posted by Brad's Blog at 7:33 AM 3 comments: