I recently bought this card from everyone's favorite consigner Probstein. We all know some of the auctions are shady with shilling and the like but every now and then you can find a good deal on a card. I picked this card up for about 12 dollars plus shipping. Very happy with the price, not too many of them out there in this condition! I dabble in grading sometimes but not nearly as much as other people. I've had my 1952 Topps Phillies Team Set PSA graded. They look nice in the slabs all together. I've had a couple of modern cards graded as well by BGS. 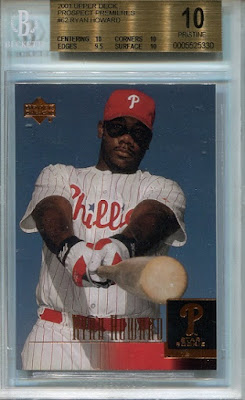 So close to perfection! Don't know how I'd get an Edges grade up so I will not be cracking this one out. I obviously have this card raw, but now I also have 9.5 and 10 copies! Gooooo Brad's card collection!

Side note.. I'm a big Eagles fan (shocking I know) so I'm super excited for them being in the super bowl. Trying to logistically figure out if I can afford to go to. I need the ticket prices to come down and then I might be road tripping out there. Not a 100% certainty by any means but I think it'd be worth it for the experience. Either way I hope they win and I think they will!

Thanks for reading!
Posted by Brad's Blog at 3:16 PM No comments:

I've gone on a mini buying spree in the new year. Nothing insanely expensive but just cards I've been looking for happen to pop up and at prices I can get them. Someone put this up on ebay for 70 dollars buy it now. I thought about it for about 20 seconds and then it was mine! More then happy to pay 70 bucks for any PC Superfractor (I've paid way more to complete my Topps Chrome rainbows!) I checked my Ryan Howard numbered cards and I don't have any of the other parallels. Maybe one day I'll find the red one (out of 5). 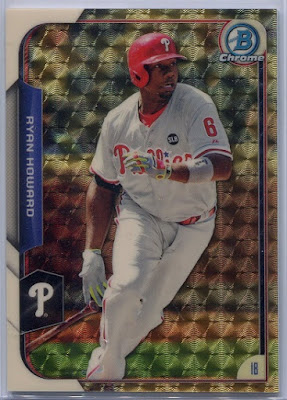 Just a very aesthetically pleasing card. This is now my 5th Ryan Howard Superfractor (2012, 2013 and 2014 Topps Chrome and 2007 Topps Finest auto). I'm very impressed with my collection if I must say so myself (seeing is how I am the sole writer of this humble blog I guess I have too) Anyways, this card is display worthy and will be joining it's superfractor friends on my wall display!

Thanks for reading!
Posted by Brad's Blog at 8:31 AM 7 comments:

I'm still active on the singles scene (baseball cards only ladies, I am married). I was able to pick up this nice parallel. They don't come up too often and was happy to see it was an open auction. Was under 20 dollars. I was willing to pay more so glad there wasn't more bidders. 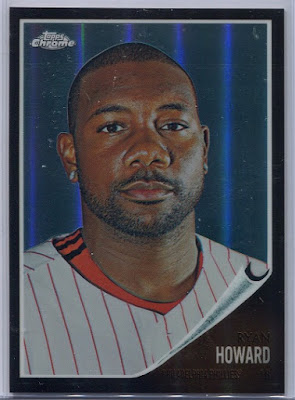 2011 Topps Heritage Chrome black. These are numbered out of 62. I opened a case of 2011 Topps Chrome back then and I recall only pulling 2 of these in the case. At 2 per case on average (I'm assuming) they aren't easy to come by. The rarest card I hit in that break is an Adam Dunn Printing plate if any Dunn supercollectors are out there and was wondering where that is.

Also, on another baseball related note I went through my checklists today from 1952-1969 Topps. Looks like I'm missing only 1 card to complete my Phillies run. I'll purchase it soon. Getting the multi team cards and the high numbers have taken several years since I do not have an unlimited budget. It's one of my favorite PC collections though, very fun to look at.

I recently re-signed up for the Topps redemption site. I know of all the horror stories with redemption's and the potential long waits, but I wanted the cards in hand. My Harper rookie auto took about 2 years. These took about 2 weeks! Crazy fast turn around and the card are nice. 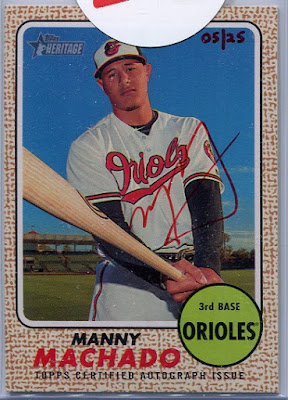 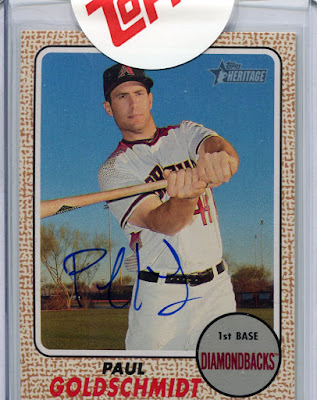 A blue ink Goldy auto. Always a fan of his and this is my first auto. He's such a solid player and doesn't get the recognition he deserves being in Arizona and not very boisterous. I watched probably 80 Diamondback games last year (I like fantasy baseball) and he was a beast all year.

I recently completed a trade with Bo.. check out his Blog, Baseball Cards come to Life! He is a regular poster and a good read. It was more of a blind trade. He said he had some Phillies cards set aside for a trade that did not happen. I was happy to send a bunch of cards over to him and he returned in kind. It was a massive stack of Phillies cards and he hit up a bunch of my set want lists. It's been a long time since I was able to knock off 2002 Upper Deck Vintage off the list. One day I will complete that set. This is an oversized card from 1984. Back when Pete Rose didn't gamble on baseball and people liked him. 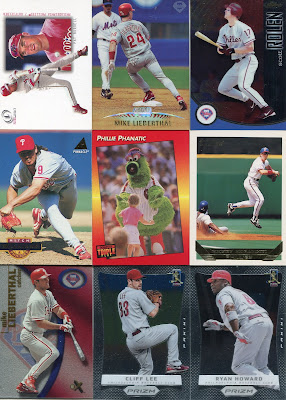 I really like the 1993 Topps Gold Morandini. It's a nice action shot and the 1993 Phillies were a great team. 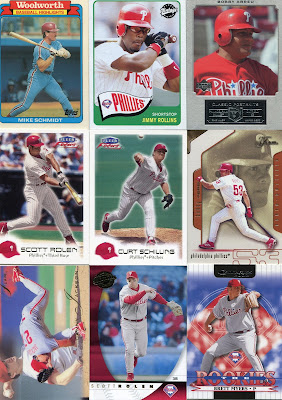 Some more nice Phillies cards. I just picked out 18 that I thought were scan worthy. Now I have to figure out my organization for all the cards I have. I have a few 800 count and 2500 count boxes full of mostly unsorted Phillies cards. There's a lot out there. One day I will organize it all. I'm mostly organized through the 70s (still working on those sets) but the 80s are tough and the 90s are crazy with all the releases.