Been a while -- Philly show recap

It has been a minute since I have posted. I haven't been super active buying or selling the last few months. Partly because I've been busy with work and family and partly because I was unwilling to participate in the crazy prices. I was unable to go to the card show in September since I was out of town but I was able to attend the Philly Show on Saturday this past weekend. It was pretty crowded, they expanded and added some more tables by shifting some things around. There was a ton of variety in the room. I only had one day so I skipped over looking at the most of the basketball and football because I know I wasn't purchasing any. I had no super real agenda just wanted something cool that fit into the collection.

A couple cards that I didn't take a picture of were some 1951 Bowman Phillies. I am now 2 cards away from completing that team set. That'll be a nice one to have. Back filling the early bowman team sets have been tough. The high numbers and star cards aren't cheap.

The big draw was Jim Thome was signing which was pretty cool. Nice to have a recent hall of famer come to these shows. I'm still waiting for Corey Simon to complete my Lithograph. (have Brian Westbrook, Terrell Owens, Donovan McNabb, Jevon Kearse and Brian Dawkins already signed on it, all in person)

In no particular order my big pickups from this wekeend: 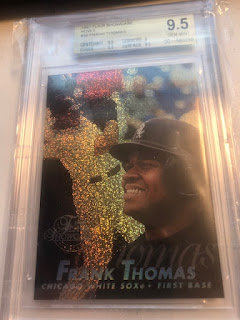 This Frank Thomas doesn't pop up too often. One guy had all the big stars graded and said he had the full set at home. I grabbed the Thomas. Unfortunately, the picture doesn't so it justice these Flair Showcase cards are super shiny. 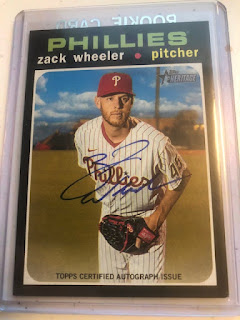 My first Wheeler auto. He was robbed of the Cy Young but that's ok hope he continues to pitch well next year. It's on-card, nice auto, I like Heritage autos in general. 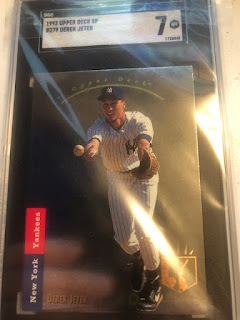 This was my most expensive purchase. I've  been looking to add the SP to the collection for a while. I know I can't afford super high grade but this presents well. The front is pretty clean. It got knocked down to a 7 because of a corner ding on the back. 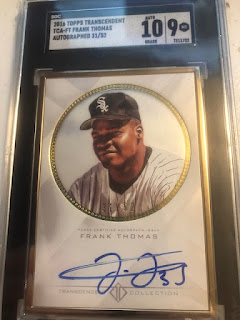 I added a nice Thomas auto to the collection. Hard to find product and on-card, hard to beat that. I don't care that it was graded but that didn't factor into the cost. The patented Thomas auto streak across the front. 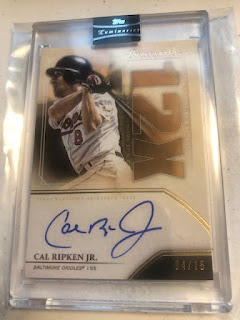 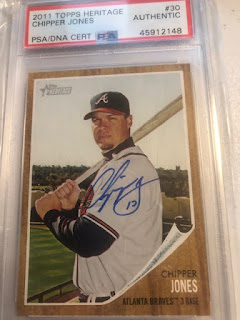 These last 2, I got sucked into a re-pack product that Steel City Collectibles does. It wasn't cheap but I didn't do too badly. The Ripken is a definite keeper. I had traded off my only other Ripken auto back in June so I was looking for a replacement anyway and this fits the bill. The Chipper is my first auto of his as well. I'm not a big Chipper guy since he tormented the Phillies for years but I won't complain about an on-card Hall of Fame auto.

All-in-all I spent slightly over budget but not too bad. I have to figure out soon what my plans will be for the National this year. It's driving distance so I have to figure out how many days I can go. It was nice to see the hobby thriving and tons of money being thrown around. I was a casual observer to a 8k deal and a 3k deal in my walking around. Also, nice to see some stuff I own being sold for way higher then I paid. Even though I don't want to sell any of it just psychological it's good to see. I fully expect there to be a downturn if baseball doesn't play this year but then I'll be buying if prices come back down to earth. Love me some financial cycles!

Anyway, thanks for reading and keep on collecting!