I recently picked up the entire Phillies Team set in one fell swoop of the blue shiny cards. I unfortunately was not able to pick up a case of Topps Chrome this year (actually tried to at the National but they were sold out and ended up getting my Holy Grail instead, funny how that works out) but I was able to get all the Phillies of this online only set (that is way over priced!) 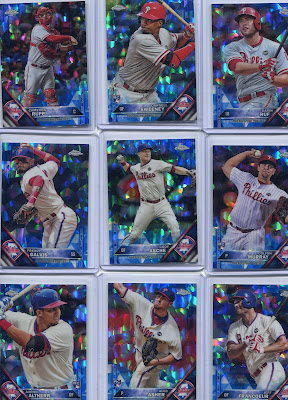 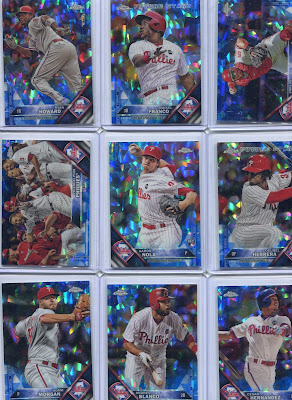 The gold Cody Ashe is numbered out of 5. That was just a nice throw in by the seller. Can't complain about that. I was reading about Ryan Howard today. Apparently, he's getting up at 6:30 Am everyday to train and keep his body in top shape for the upcoming season. Gotta admire the dedication and wantingness to continue his career. It'd be cool to see him hit 400 home runs (he's currently at 382). I did witness his last home run in a Phillies uniform. I was at the 2nd to last game with my wife against the Mets last year. We weren't able to go to the last game but that was a nice consolation prize. He will always be the Big Piece that won a title in Philadelphia.

Thanks for reading!
Posted by Brad's Blog at 4:56 PM