I haven't posted in too long. I appreciate the cards people have sent me. I am making a list of people I need to hit back. I don't have any of the new cards but plenty of other things to send! (I mean other cards not random household items like staplers) Not sure if you heard but the Patriots won the Super Bowl. They're decent, but I'm still an Eagles fan through and through. Spring Training starts up some time soon. I haven't seen any of the 2017 cards in person yet. Enjoying the breaks online though seems like most people are generally happy with the set.  The NFL also did their Hall of Fame voting. I'm surprised Terrell Davis got in since his career was so short. He was undoubtedly great before he tore his knee up but that was it. I guess that's the comparison to Gale Sayers but I didn't think he'd make it honestly. Terrell Owens and Brian Dawkins should get in sometime soon. As much as TO wasn't liked personally his football playing was more then Hall of Fame worthy. I've met both Owens and Dawkins at autograph signings. Owens was a bit of a diva but has a nice sig and Dawkins was beyond nice to every single person really makes you feel welcome. 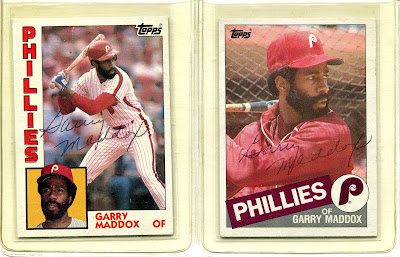 Speaking of In person autos here's a couple of former Phillies great Garry Maddox. Pretty cool. Big fan of 1985 Topps in general so it's neat to have this card signed.

Thanks for reading! Need to scan and post more!