This was the last card I picked up at the card show. I had been wanting one for a while but didn't want to overspend on some trimmed card that looks nice. I figure I'm safer playing on the lower levels of grading and not messing with the ultra high end (not that I could afford it anyway) This is a nice addition to the Hall of Fame rookie PC that I am super dis-organized and pick up things randomly as I see them. 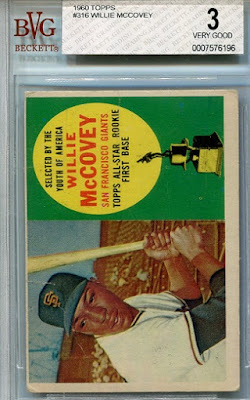 Good ole Mr McCovey. A solid BVG3. Obvious wear on the card but it still looks cool to me. It pair well with my only auto of his. 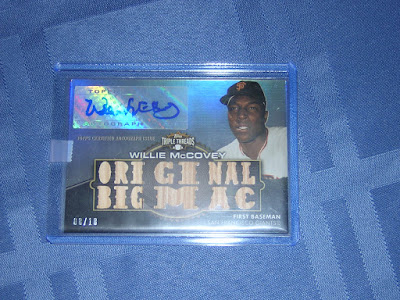 A nice one from year's past Triple Threads. Always happy to get a big check mark off the proverbial list without breaking the bank.

Been a fun offseason so far. Lots of big spenders and the market is moving quickly unlike last year. The only mysteries now if there will be any big trades. The three biggest names in my opinion are Mookie Betts, Franciso Lindor and Kris Bryant. Phillies have no shot at Betts or Lindor but the rumor around here is they want to go after Bryant. I would be totally cool with trading prospects and some major league talent for a guy of his caliber.

Thanks for reading!
Posted by Brad's Blog at 5:02 PM