Been meaning to post earlier but got busy. I went to a party on Saturday and played the drinking game slip n slide flip cup. Needless to say I am quite sore and have a couple of bruises... all worth it though.

I'm still watching baseball every chance I get even though the Phillies are terrible. I never was big on researching before the draft but if the Phillies are in the top five maybe I'll take a look.

Fantasy Football Draft Season is upon us. I'm in my usual 4 leagues. I have 3 snake drafts and one auction draft. I am pick 3 of 10 and pick 10 of 12. The other one I won't find out until 30 minutes before the draft starts. Already 2 top WR's went down with torn knees (Jordy Nelson and Kelvin Benjamin) Injuries are the worst part of football.

I haven't gotten my hands on any of 2015 Topps Chrome yet but I will eventually. I would like to grab the Ryan Howard rainbow if possible. It's always a hunt for that superfractor though!

and here's a random baseball pic! 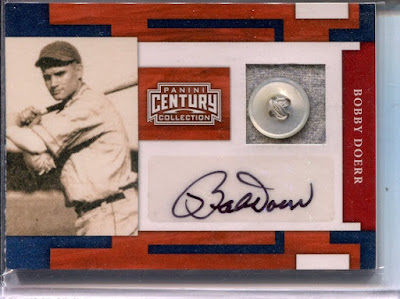 This is my only auto of Bobby Doerr and my only button card. Pretty sweet!
Posted by Brad's Blog at 5:38 AM