It's my Birthday today!

I know I've been slacking in posting, but wanted to get something up today in honor of my Birthday! (how self serving I know) Regardless, I had already celebrated a few weeks ago by hosting a Phillies tailgate. Had a nice turnout as well 17 people came to the tailgate and 11 people were able to attend the game afterwards. Can't complain about that. Thankfully picked a good weekend. If I were to pick this weekend the game was literally rained out. My Wife and I ended up going to the game on Sunday to see DeGrom vs Nola. DeGrom lasted one inning because he threw 800 pitches (really over 40) but it seemed like 800 and somehow gave up no runs and no hits. It was a rather odd stat line. Nola looked decent, the Braves were getting mostly singles and he only gave up one big hit to Cespedes. All in all was a good time and the Phillies won! 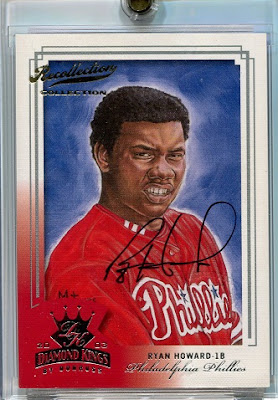 This is an on-card auto of Ryan Howard from 2003 Diamond Kings. The picture cracks me up so I had to get this one. He looks genuinely annoyed that some pitcher decided to pitch inside to him! How dare they!

Anyway, hope everyone had a nice week and continues to enjoy life!

Thanks for reading!
Posted by Brad's Blog at 4:49 AM