Now back to our semi regular scheduled program. We took a break for Gint A Cuffs.I had opened that box about a month ago but was none too thrilled with the results so I literally got my score up on the deadline day! Go Procrastination! 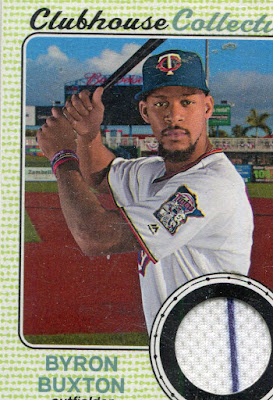 A decent Byron Buxton relic. I watched a bunch of Twins games this year because I drafted Ervin Santana on my fantasy team (20th round great pick) and Buxton really looked lost at the plate at the beginning of the year, but man at the end he sure did look good. Hopefully he truely turned a corner on major league pitching and continues it next year. With his speed he is a fun guy to watch. 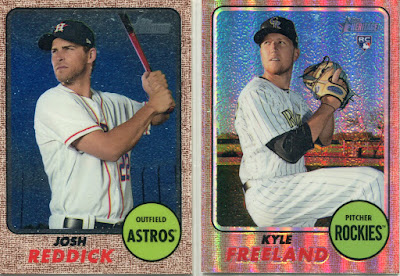 Two shiny cards. Reddick is currently in the ALDS against the Red Sox and Kyle Freeland's team fell to the Dbacks. Freeland had an up and down rookie year. He has some decent stuff so I think he can stick around the majors for a while if he continues working hard. 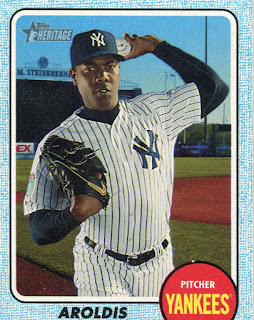 These blue borders are a weird subset in my opinion. Apparently there are 50 of each of them but they are not serial numbered. I believe I pulled 2 total and at first I thought they were just one of those 1 per box type deals and then I didn't see another one. He's the highest paid closer in baseball if you didn't know. He did not perform like the highest paid closer in baseball this year though.

Thanks for reading! Still some big hits to come!
Posted by Brad's Blog at 4:05 PM