I am now back from a little vacation. I would say the Phillies invited me to be in on the Bryce Harper meeting but unfortunately that didn't happen. The Wife and I flew out of Baltimore on Sunday morning. We thankfully did not get delayed even though it was legit snowing. Just had to sit on the tarmac a bit longer for the people to de-ice the wings. Kind of important when flying so I get it. We still got into Vegas well before the Eagles game started. We had time to sit down for a nice lunch in Ceaser's Palace and get a seat at the massive sports book in Ceaser's. The screens there are legitimately large. The front row seating was free and first come first serve. The other rows were 150 a seat and you get 3 drinks and then they had some vip seats that were 350 a seat but you had open bar the whole time. It was pretty lively during the game.

Obviously I was not happy with the ending but I still had fun watching with that crowd. Lot of money flowing for betting. Literally every commercial break the lines changed and you could place fresh new bets on either team.

The Wife and I got roped into one of those time share presentations. Ended up working out. We did not buy a time share (super expensive for these ones) and with the free swag in my opinion it was worth it. We got 2 Free Buffets (at the Paris Hotel), 2 Free Tickets to the High Roller (pretty cool Ferris Wheel thing), 2 Free show tickets (saw Zombie Burlesque in Planet Hollywood, very funny) and 25 dollars in free slot play. (Turned that 25 bucks into 31 dollars, killed it!)

Doing that time share did save us a couple hundred bucks in stuff we were going to do anyway. Don't know if we would've picked that exact show but we were going to see something regardless. We were pleasantly surprised though.

Did a ton of walking which worked off the buffets, also side note, Southwest Airlines has free Wifi and movies that you can stream on their flights. Pretty awesome. Make sure your phone/ipad is charged before the flight!

Also..baseball cards.. still collecting and looking for the next big thing. Haven't made any huge purchases lately but always on the lookout! 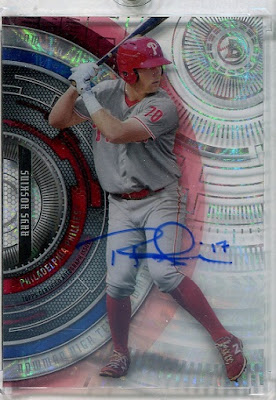 This Hoskins I picked up at the last show I went too. I like the on-card auto and I'm a sucker for the Tek look. These cards look really sharp in person.

Thanks for reading, can't wait til Harper and/or Machado sign with the Phillies.