Halladay in the Hall!

I was happy to see that Roy Halladay made the Hall of Fame. I was saddened to hear when he passed away in that plane crash. I had actually seen him a month or 2 before at a card show, he was there as a signer. If I recall correctly it was 100 dollars for a signature. Which I figured he'd be around Philly more since he had said more then once that he liked the town and I'd be able to get him to sign something cool another time. Unfortunately he passed away not too long later. Not to be too serious but thats what I remember. He was great to watch on the mound. A great pitcher and most definitely deserved to be in Cooperstown. Seemed like every year he was in the Cy Young conversation and you knew every 5th day he was bringing it. I saw him pitch in person a few times when he was with the Phillies. I remember the moment when he pitched the no-hitter against the Reds (I was in Atlantic City at the Tropicana watching in a bar) (was a good night!).

I'm not going to re-hash his numbers but he definitely passed the eye test for Hall of Fame. 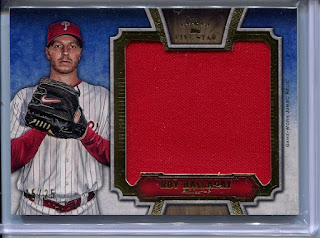 I don't have a ton of cards of his. Some nice 2012 Five Star. He was a big part of that vaunted Phillies pitching staff of Lee, Hamels and Halladay. Home stands were quite fun when those 3 were going back to back to back.

Thanks for reading!
Posted by Brad's Blog at 7:18 PM