We are getting down to the last few years of The Koufax Countdown! No one really knows how fast Sandy Koufax threw throughout his career because they didn't use a radar gun. It was estimated around 93-94 MPH but some say thats way off. He did strikeout basically everyone. 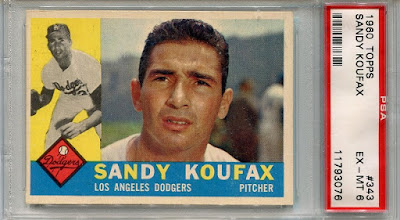 The side picture looks a lot like the Fleer picture from 1963. Koufax led the league in strikeouts per nine in 1960. He did that 6 times in his 12 year career. In 1960 Koufax was 24 years old and really started to come into his own. His true dominance began the next year (maybe I should've counted up?)