I know I haven't posted in forever. I can't say that I will be posting regularly again anytime soon, but I wanted to document my time at this year's National. This is the first time I am going to all 5 days. My wife and kid are at home so I am on my own. It will be good pace wise since a 2 year old really can't hang all day, but I will be missing  my wife's ability to just say go for it when purchasing an item.

I arrived about 30 minutes before the VIP party was set to start. Thankfully, had no issues parking (I only have the regular VIP so I just parked in the convention garage) I got my VIP package and headed over to the lounge. I saw that people were already living up for the three signers (Greg Luzinski, Ron Jaworski and Bernie Parent). I brought cards for Luzinski but I didn't have anything at home for Jaws or Parent.

For the VIP signers, I'm really only interested in the Phillies (Morandini, Milt Thompson, Tommy Greene, and Don Money) I get 6 autos and 6 wild card autos. The wild cards only work if they call it near the end of the signing period so if they aren't overly busy. I did get Tommy Greene but didn't get the others. I was able to trade with someone for Milt Thompson and Don Money. I want to get 2 cards signed by them so I'm hoping they just let me use a wild card on it.

Thankfully, Tri-Star had a table with 8x10's and pucks. They only charged 5 dollars for each item which was nice that they didn't try and gouge people. They didn't do anything too crazy for all the attendees. Last year the whole room got an 8x10 auto with the big prize being a Mantle. This year they did some random drawing give-aways with the big prize being a Manning autographed helmet. Spoiler alert, I didn't win. They did have pizza and some other bar type food and plenty of soda and water, which was nice.

The first line I waited in line was Luzinski. They were pretty strict about the 1 signed item per person but they did not limit if you wanted to get back in line again. They were set to be signing from around 3:30 to 6 so plenty of time to get them all if you didn't mind waiting. The first line moved real quick because I was pretty close since I got in line right away.

Ended up getting 2 Luzinski's signed. The Father/Son card didn't come out as bold as I would've liked but that's ok. The other card looks really nice. (I am failing at turning pictures right now) 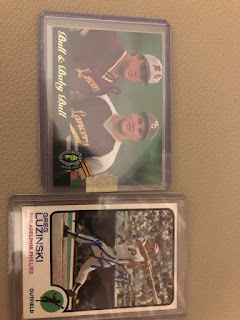 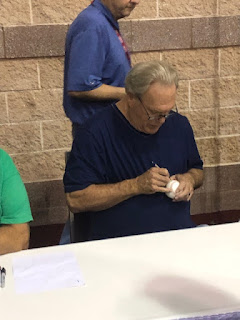 Next, I waited for Jaworski, this took a while! The line was legit long. I got this really nice 8x10 signed by him. 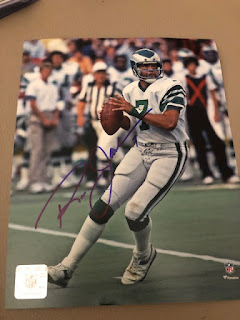 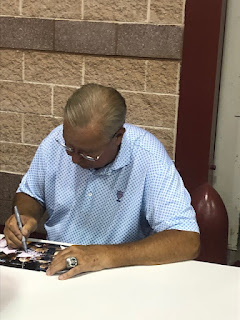 After finishing that, I was hoping the Parent line would've gone down a bit. It really hadn't much. It was approaching 4:30 at this point and thats when Morandini was signing. I had no autograph tickets for him so I decided to get the sure thing with Parent and then just hope for the best on the wild cards.

I got this puck signed and it really looks nice. 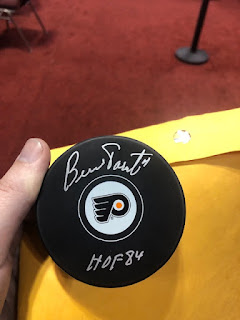 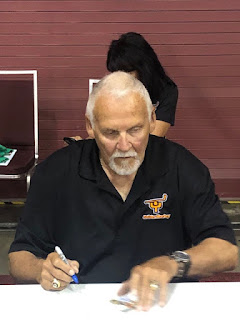 All three signers were very personable. I had some real positive interactions with all three. Talked about super bowl rings with Jaws and complimented Bernie being the best Flyers goalie of all time.

At this point it was pushing past 5 PM so I figured I would give Morandini a shot. It was quite a long walk clear across the entire convention center to get to the autograph area. I walked over there and saw he was still signing and asked the person working there if I was ok to go in with Wild Card tickets. He didn't seem to care and let me in! 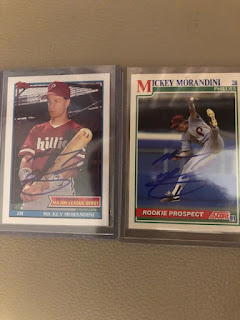 I got 2 rookies signed. The Score pic I just really liked. Mickey is a nice guy and was very personable to everyone in line. Another really nice interaction. My friend bought a cameo for me a couple years ago for Mickey to wish me Happy Birthday. It was great but he continually pronounced my last name wrong which made it all the better!

At this point, I wanted to sit. I knew Singles Club was right next to the autograph area. They offer Basketball, Baseball and Football dollar boxes. Tons of refractors and cool cards in them. I ended up pulling 45 cards and they only asked for 40 dollars which is always nice to get a couple cards for free. They also have a mystery backpack which has 1 wax item and 1 card per back pack. If the price isn't too outlandish I like playing these games. I bought one, cause why not the backpack is nice. 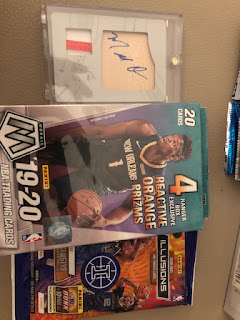 The card is a Marcel Ozuna 1 of 1 from Immaculate. It's a pretty cool looking card. Zero idea on value though. I know he doesn't have a big following but the card itself is pretty unique. I don't really collect basketball much but that hanger box is 30-40 dollars or so.

I decided after this to walk around a bit with my 2 back packs. I ended up looking at some showcases on the way to the corporate area and actually found a card on my list at a price I was quite happy with. 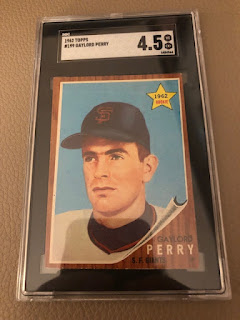 Gaylord Perry 1962 Topps Rookie card! Mid-grade is right in my wheel house. I don't like to pay the premiums for high grade stuff if I can help it. I would've been ok with raw too but honestly I paid the raw price so it being protected is fine with me!

I saw some other cool things that are well out of my price range. 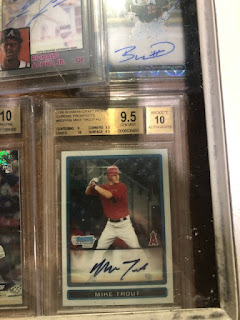 A nice Trout rookie auto. I remember the days when this was an 800 dollar card and I was like people are nuts to pay that. I believe this card is around 12k now. 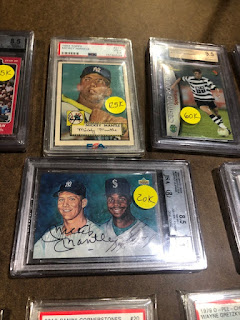 This guys case was pretty amazing. He also has a Frank Thomas NNOF. The Mantle/Griffey auto I always wanted but missed my window. I'm no where near spending 20k on anything that isn't a roof for my house or a car. 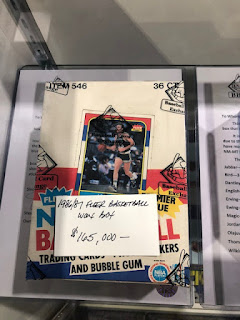 A modest 165k for a box of basketball cards. I just enjoy the sticker shock. I would love to buy this and just open it.. cause why not?!

After making my way to the blowout booth I picked up my pre-ordered Mega boxes. I didn't hit any crazy packs and I am planning on not opening them until after the National. The most expensive pack in this bunch is the 2020 Topps Chrome Sapphire. 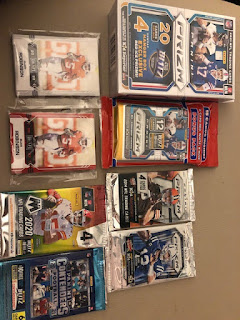 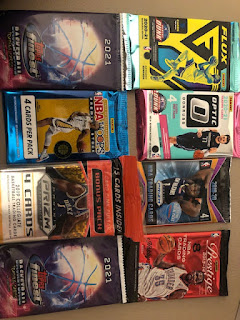 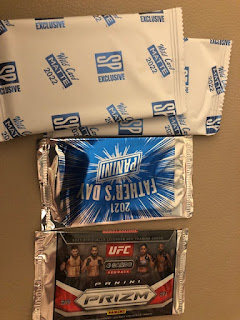 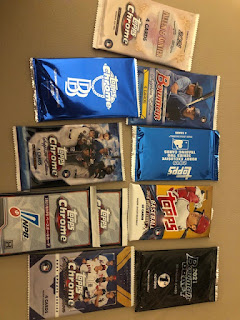 I reocognized some dealers that I know from the King of Prussia show that I've been frequenting through the years. I bought 1 card and sold 1 card. I sold a Willie McCovey auto from Triple Threads. I bought it for 40 dollars a few years ago. Sold it for 50. More then fair deal. Dealer will probably put a price tag of 80 on it and take the first 70 offer he gets. Its not on-card so I'd be looking to upgrade eventually. 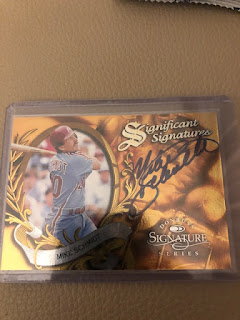 Here are some other pics I took of the show. It's much bigger then 2016. There are a lot more vendors and they are trying to be pretty interactive which is cool to see. Tomorrow I plan on looking at more showcases in some sort of organized fashion. Today I was all over the place. We will see how that works. Tommy Greene is signing so I plan on getting that one as well. 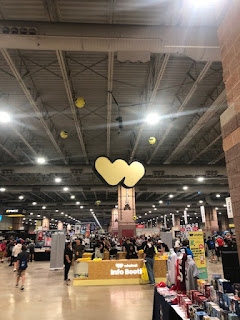 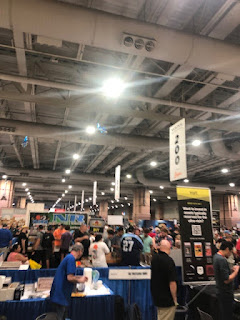 It's hard to capture the scope of the floor. I don't think there is enough time to really see everything but I am sure going to try! 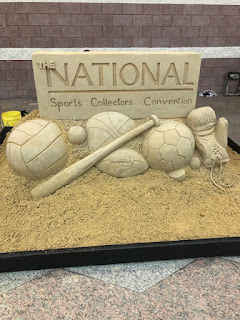 This was made out of sand, very impressive.

Here was the cards I got for the VIP Package. Anyone know how good this soccer player is? 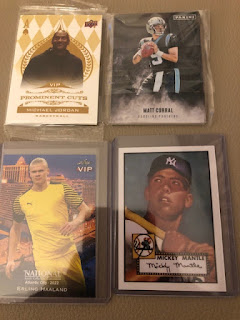 So far so good. I brought a bunch of cards with me and I am planning on attending the trade night tomorrow. I pre-registered so I should be getting a free t-shirt! I love free t-shirts. Hopefully be able to make some deals. If not, no big deal at least have some good conversation. I am planning to post after each day so everything is fresh in my mind.

Thanks for reading after so much time away!