The national is like a card collecting marathon. You can tell who has been here the whole time and who is just coming for the day. I know I was real tired last night so I was planning to sleep a little. I didn't have any major agenda for the day except meeting up with a friend and getting a Milt Thompson auto.

I did sleep through the alarm a little and decided to just go straight to Ceasar's to park and not even mess with the around the convention center traffic. That was the correct call. Tons of people were sitting in traffic as I walked the half mile or so from the garage to the center.

My day started a bit slow. I didn't see anything crazy but I did pick up a couple things. I picked up a Don Money card since I only had 1 and I have 2 auto tickets. His session is tomorrow.

I also fed my obsession and found another cheap one! (18 dollars) 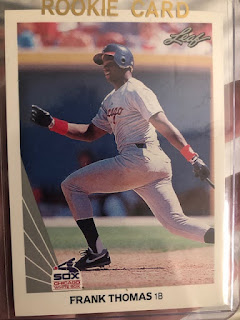 Such a great card. This one is a real clean copy. I'm glad it wasn't graded so I could buy it cheap. That dollar was real nice. He had it listed for 22 I said how about 20 he said 18 is fine. That was unexpected but I was thankful and let him know.

After that I was looking at a booth with a ton of signed baseballs laid out. I have a couple spots in my display case when I re-jiggered the room a bit ago so if I found a ball at the right price I would grab one. I was able to get this one for 40 dollars which I thought was absurdly cheap for a official MLB ball. (another dealer had it for 125) 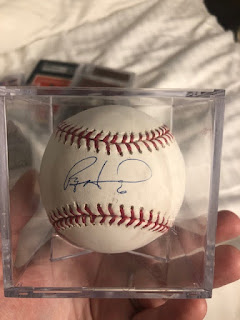 After that I decided to take a break in the VIP lounge and get something to eat. Not much was going on there but my friend was coming shortly so I was good to wait. He came not soon after and he had pulled some Frank Thomas and Phillies stuff for me. I ended up trading some 93 Jeter rookies for all of it. I'm sure we were close on value but he gets something he wants and I get to add to the PC. A good trade all around. 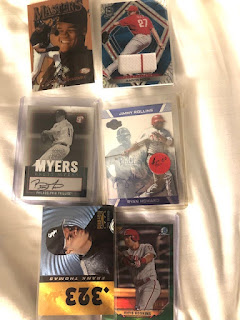 I highlighted some of the cards. The Pinnacle Starburst of Thomas is such a pretty card. The swirls really pop out. The Hoskins is a rookie that I didn't have. A real random Brett Myers auto. I'll have to check my spreadsheet but pretty sure I didn't have an auto of his.

After that my friend wanted to see if he could off load some of his pokemon cards (note: real nice stuff) and I wanted to get Milt Thompson's auto. My friend hooked me up with an all access auto pass so I didn't have to wait in line. Unfortunately, I was only able to get 1 Milt auto though. They never called the wild cards and I didn't get another ticket. He was super cool though. I complimented his batting stance and we talked about the Vet for a bit. Granted, I was literally wearing a shirt that has a picture of the vet on it.(a lot of people randomly wanted to talk about it, definitely was a good conversation opener with people) 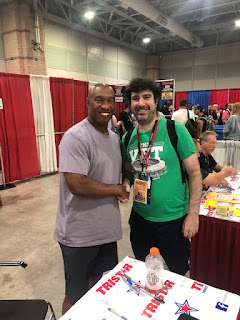 Milt was kind enough to take a picture with me. It came out nice. I got a 1987 Topps card signed.

I knew the general vicinity where my friend was heading so I headed that way to find him and give him his access pass back. I didn't make any deals on the way (not for lack of trying) but I did find him at the same booth I sold my 4 pokemon cards too. I hadn't really looked at their showcases but I was casually searching the one baseball box when a card in the showcase caught my eye. It is on my main want list and was within my comps that I researched before hand. I made a package deal for these 3 cards. 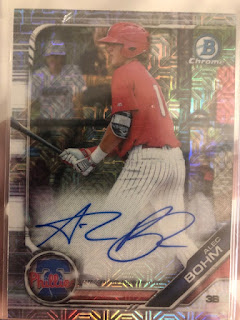 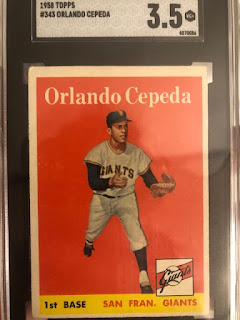 The Bohm is from the megabox. The shiny factor is off the charts. The Schmidt is a nice patch numbered out of 25.The big draw was the Orlando Cepeda rookie. I don't know if it was short printed or what but I haven't seen another one even with all the vintage in the room. It's definitely showcase worthy. It got a low grade cause there is some staining around the edges on the back but no paper loss or anything crazy like that.

The dealer's wife explained to me that they only let one person consign with them and it was this gentleman's card. He is slowly selling his collection from when he was a kid and he personally pulled this card in 1958. Hard to beat that provenance!

Pretty psyched to knock off a big card and plan on displaying this one. At this point there was maybe 2ish hours left for the day.

I randomly found a Hans Crouse auto in the show case. I know I don't have that auto in my collection so I grabbed it for five dollars. Shout out to the dealer for asking for my blog website, hope you are reading! 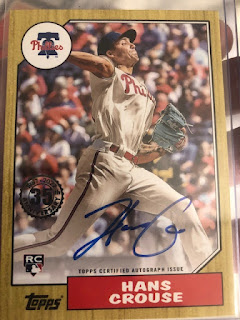 He also had this awesome Jalen Hurts: 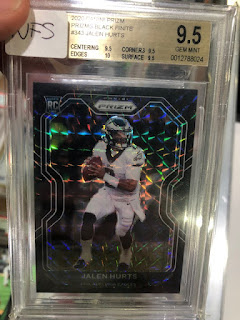 This is the black finite 1/1 Rookie card. Prizm really is nice for Football and Basketball. I can see why its highly collected.

After this I decided to gamble a bit. Bought one of the Hit Parade baseball boxes and got a cool card. 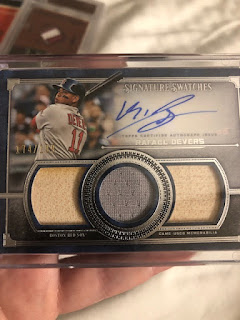 A Rafael Devers Museum Collection auto. The last sale was 115 dollars. It's not a bad card, but I didn't win so to speak on the transaction. Although, most times breaking boxes you don't 'win'. It is my first Devers auto and he is quite a good player so happy to hang onto it.

Apparently, even though I was quite tired I had one more big deal in me for the day. This one was completely unexpected. I was walking by a dealer and he made a nice comment about all the people he had talked to that day. It was nice to hear that he had a lot of positive interactions. We started chatting and I offered if he wanted to look at my stuff. He pulled out 4 cards and told me to wait because his buddy would be interested. Turns out he was very right. One of the cards he was super interested in. We ended up talking and going back and forth for about 20 minutes until coming to an agreement. 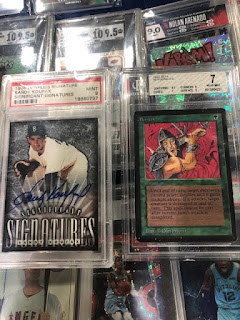 I traded the Beta Berserk I picked up yesterday and a little cash for a freaking Sandy Koufax auto graded PSA 9. The card is fantastic in hand. This negotiation was wild in the swings. He wanted to outright buy the Berserk from me but I didn't want to sell it. I wanted the Koufax. He didn't want to trade the Koufax, he wanted to sell it. His friend convinced him to throw out a number for cash on a partial deal and he threw out quite a high number. I looked up comps and it was a bit out of line. Honest mistake cause he said he comped it months ago. He ended up coming way way down on the cash and thats when we agreed but not before some back and forth. I was willing to walk away and I think thats why the deal got done. He didn't want to let me leave with the Berserk in hand. I was totally fine keeping it but the Koufax really fits my collection. At the end of the day I turned magic cards I haven't looked at it in years into a Koufax auto!

No more deals til the end of the show. Found one card I like (Alec Bohm red ink heritage auto) but no clue if it's a good price so need to research before committing to it. Not entirely sure I'm going to go get it tomorrow.

Here are some pics I took of things I saw: 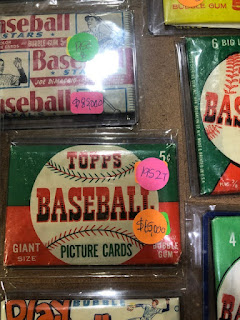 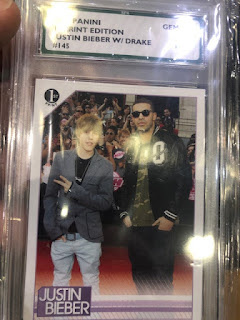 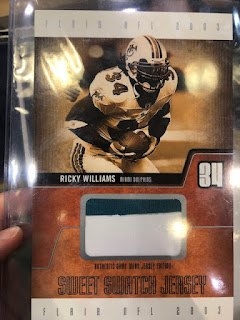 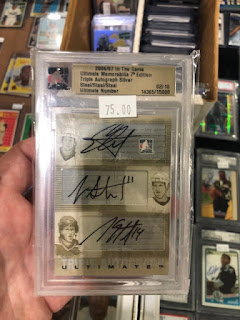 The hockey triple auto is the Staal brothers, Marc, Eric and Jordan. There is a card with Drake and Justin Beiber and apparently people like it? Not in my wheelhouse. The 52 Topps pack speaks for itself.

After the show I wanted to just relax. Went and got dinner back at the hotel (chicken wings yum). After that, I decided to gamble a bit for the first time on this trip. I played some 1-2 no limit for a couple hours and won 200 dollars. Played on a fun table with good action.

Until tomorrow! Thanks for reading!