We are more then halfway done the show. It's been great overall so far. I've encountered some unreasonable prices on Ryan Howard cards (Bowman's best auto for 90, thats a 30 dollar card, they will be holding it forever). I offered 50 and the guy said 85. That's not a negotiation, that's a robbery. I walked away.

Before the show today I messaged my old boss who lives in the UK (hi Jack, if you are reading this!) if he needed any Pokemon cards for his collection. There is an abundance of Pokemon cards some dealers, that is all they have.  Jack gave me 3 targets. There is not an abundance of Magic cards. I saw one big dealer with real nice stuff (we will get to him later) and one guy selling unopened boxes of the recent stuff.

Parking wise, today started off much easier then yesterday. I was able to get a spot in the garage without issue and not a lot of traffic (also left the hotel at the right time). Since I have early entry and wanted to buy a Series 2 jumbo box anyway, since I did that for Series 1 to complete the set and hopefully hit something nice. I bee-lined to the corporate area picked up a box from blowout and then went to the Topps Redemption line. I was 5th or 6th in line so once they opened at 10 the wait wasn't more then a couple minutes. All they do is break the cellophane wrap take it and then give you the packs. Back in 2016, you literally had to open the entire contents of the box in front of them (or case) to get the packs, glad they learned how inefficient that was. I did not sell anything today and that's ok. I didn't really push too hard for anything. I'd rather trade most of the time or do cash/card deals.

The packs overall for the show have been good from what I've seen. Lots of numbered cards and a few autos. I hit a numbered card in each pack. A gold out of 50 and an orange out of 25. 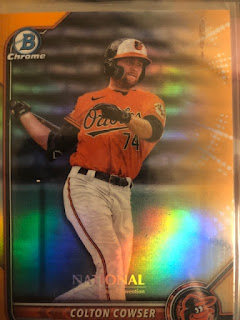 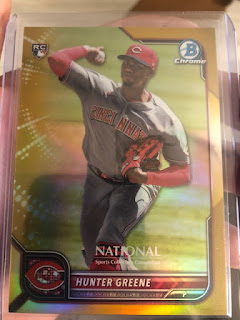 Real sharp looking cards.I don't know a lot about Cowser but I know Greene throws 100 and once he gets a bit more control he could be really good. I remember Luis Castillo was a bit wild when he came up and he has been great the last 2-3 years. Some dealers had redemption packs for straight purchase and they were asking 40-50 a piece.

After that I walked around a bit and picked up a cheap RC I did not have. 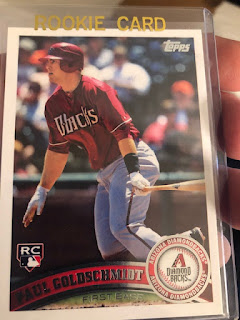 A bit off center Goldy from 2011 Topps Update. I think he has a shot at the Hall of Fame. He's been so consistently good throughout his career. I'd rather grab this card now and if he doesn't make it, thats ok it will be worth about the same instead of waiting and seeing it shoot up.

Cell service was pretty awful in the show today. It was incredibly spotty and I had no clue if my texts were going out to people. Thankfully, I was able to get Jack's opinion on the pokemon cards for prices. I didn't want to overpay. I was searching for one of them on a pretty large all pokemon both and got into a conversation with a patron and he asked me which cards I was looking for. I mentioned one of them and he immediately said the dealer just bought it from someone. I immediately bought it from them at a solid price. 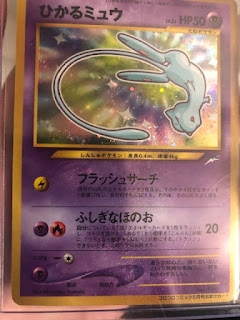 Very pretty card in hand. For those that don't read Japanese, this is a 2001 Corocoro Mew promo no. 151. Pretty psyched that I found one of the three cards. Working on the others!

I was trying to be organized in my searching. I mainly failed at that. It was too easy to look at one booth go across the aisle and sort of get lost. The big corporate guys are in the middle which sort of breaks up the room, but then the breakers pavilion is a large section but they also sell cards and boxes so yea, I guess what I'm trying to say is the National should be 10 days long.

I finally came across a magic dealer that has a store and does it full time. He had a ton of graded dual lands that go for big money. After I made my deal he was negotiating with someone on a 30kish deal for a bunch of them. I showed him my magic cards that I pulled before the National. After walking around for 2.5 days or so and seeing almost no one with magic I wasn't hopeful I'd be able to trade or sell them. He took a look at the stack and recognized the 2 key cards (Gilded Drake and Survival of the Fittest) the rest were smaller items that would move eventually but would be a pain for me to list out.

He asked what I wanted and I explained real quick how I comped them and showed my list. These cards full ebay retail came to about 700. I said I'd take 500 cash. Not crazy but it would take him a bit to piece out. He though for a second thanked me for my time and said he'd pass. That's when I went into negotiation mode. I was looking to unload, I didn't want to take all the same cards home. I said I was looking for a Beta Force of Nature and I would trade those and kick in some cash. He said he didn't have one but he had a box of graded Beta cards. I went through the box and pulled a few cards I was interested in. One card more then the others but I was hoping to get one of the smaller cards thrown in.

Ultimately we did come to a deal... 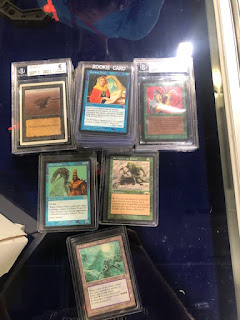 A Beta Bersek and an Unlimited Sinkhole for my stack. Key cards I traded are also shown. I actually had room in my trade/sell box after this trade. It was a minor miracle. I'm quite happy to pick up 2 nice cards. I don't care about the low grades but the Bersek is roughly a 400 dollar card and the Sinkhole is 40 give or take. I think the dealer agreed cause eventually he'd win on the deal but I'm happy to consolidate my mish-mash into 1 older card. Win-win.

I was feeling good after the trade and picked up some cheap HOF rookie cards. 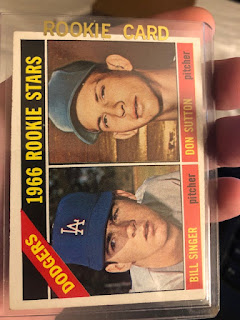 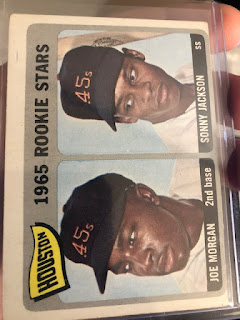 Joe Morgan and Don Sutton rookies. Both in perfectly loved vintage shape. From the same dealer, I grabbed 5 Frank Thomas inserts for 15 bucks. All 90s goodness. He was a personable guy so it was nice chatting with him for about 10 minutes and I got some nice stuff.

I was on a roll and I spotted a card that has been on my want list a while.I was not looking for graded because the premium is outrageous. 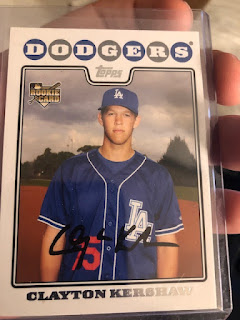 A nice looking Clayton Kershaw rookie! This is my 2nd nice Kershaw pickup (one bought, one traded for) in 2 days. It's not perfect centering wise but I don't care. At this point I decided to head over to get some lunch near the vip lounge and sit down after I got it for a while to rest my feet. (The concrete floor is rather unforgiving after several hours of standing/walking) On the way I found another card cause that's what I do.

It wasn't expensive and it's on-card so it fits a lot of my criteria. 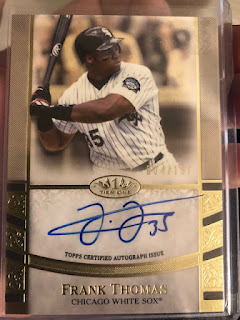 This is from last year's Tier one. Numbered out of 157 for some reason or another.

Somehow I made it over to the rather ridiculously long line for overpriced burgers or chicken fingers. I usually strike up conversations with people, especially at this show never know what you might find. I was standing behind one of the workers for a breakers booth. (east/west breaking I think) We were chatting about different cards and he was showing me on his phone the cool cards that people have hit at the booth. I mentioned some trades I made including getting rid of the 1957 Mantle PSA 1 which now leaves a hole in my player run. I wanted to upgrade to a nicer 1 or a solid 2.

Next thing he says is that he can't believe I just asked if he happened to have that card cause he literally just traded for a PSA 2. He showed me on his phone. I asked if he would sell it, checked comps and we came to a super fair agreement. He was under every single dealer there for low grade Mantles (trust me I asked most of them I think) It's a real nice PSA 2. Bold colors.

Who has two thumbs and makes a deal waiting in line for lunch? This guy! 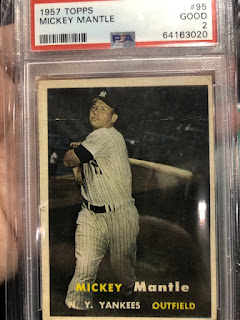 I plan on keeping this one unless I get blown away in a deal and then have to replace it again. What a vicious cycle this could become! I'm just glad I was able to find one so quickly and not have to ebay it at a later date.

I finally sat down and ate in the VIP lounge. Sat with 2 older gentlemen at a table and learned one of them used to be a postmaster general. I showed him the stamp card and he gave me some education on stamps and what research I should do on the stamp I got from 1855. Once I have some time at home I do want to look into it. (check National Recap Day 2 for the pic)

Then I watched a kid about 10ish years old break a 2022 bowman box. Unfortunately, didn't get anything crazy.

My last 2 pick ups of the day were different. 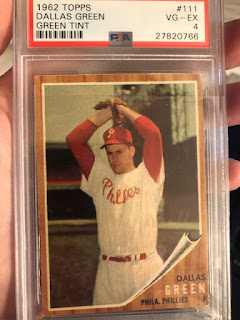 A low grade Dallas Green, green tint. I know I have the Green in the team set but I don't know if mine is green tint so I bought it. It was cheaper then the cost of grading it by quite a bit. 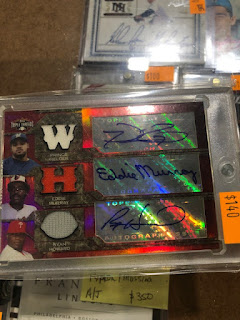 A triple auto with Ryan Howard, Eddie Murray and Prince Fielder! With my superior negotiating skill of saying 'would you take 100?' and the dealer looking at the card and saying 'sure i can do that' I got the card for 40 dollars less. Never hurts to ask!

For those who haven't read the previous 2 posts I traded both of my other triple autos away so got a different one back. Solid way to update the collection and feeling good about it.

Some other things of note.. found this card, my friend's holy grail (he only collects bowman chrome gold) but it may be out of price range right now unfortunately. 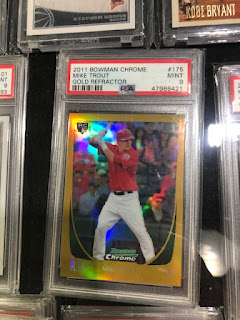 Here are some other pics.. 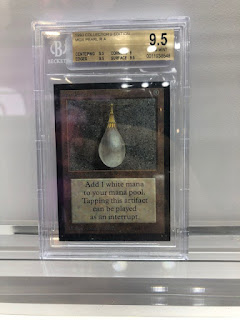 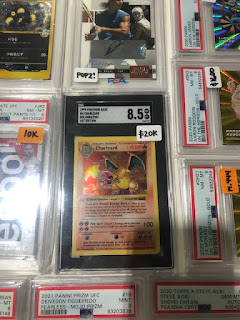 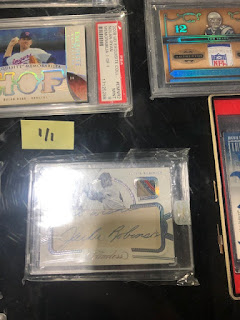 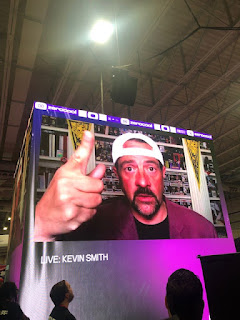 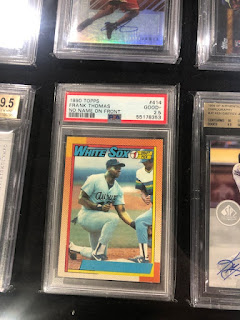 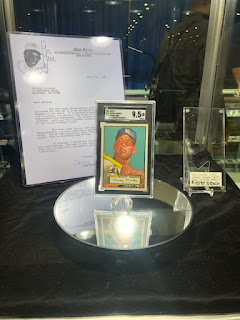 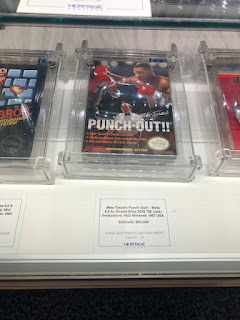 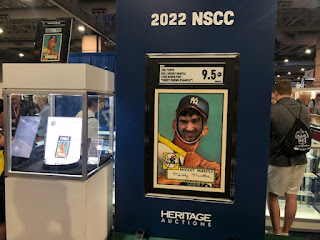 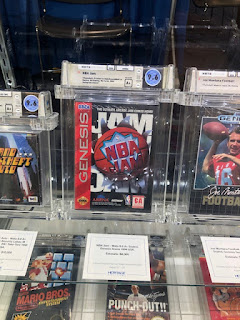 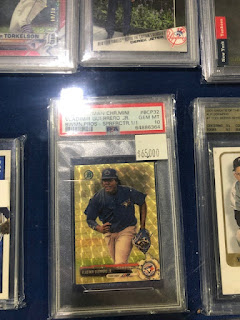 Yes, that is my face on the Mantle. Yes, that is the Mantle currently up for auction. I checked earlier today and it was close to 6 million. Probably will end around 10-12 million.

Just took some pics of other cool things I ran across.