I recently (year and a half ago ish) moved to a new place. We unpacked everything got the card room up and running (most importantly!) I thought I had all cards accounted for. I was super careful to not let anyone move my nice cards or touch even the not nice heavy ones. Recently, I was watching some random breaks online and saw there was Clayton Kershaw autograph. I was like oh yea I should have one of those. I went to the card room to look and could not find it anywhere. I spent part of my day off last week going through boxes wondering if I stuck it one of my many 800 count boxes that I have on the shelf. Unfortunately, I found nothing. I asked my lovely wife if she had any ideas. She informed me that there was one thing we had not unpacked. Some old VHS tapes down in the basement. I kind of dismissed it but she decided to go look and low and behold the cards were sitting in some Upper Deck tins in there!

The card that started the search.. 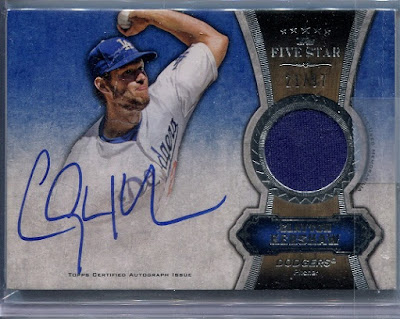 A pretty nice Clayton Kershaw on-card Five Star auto. He is pitching lights out this year. Glad I was able to find my only auto of his. The prices keep going up. 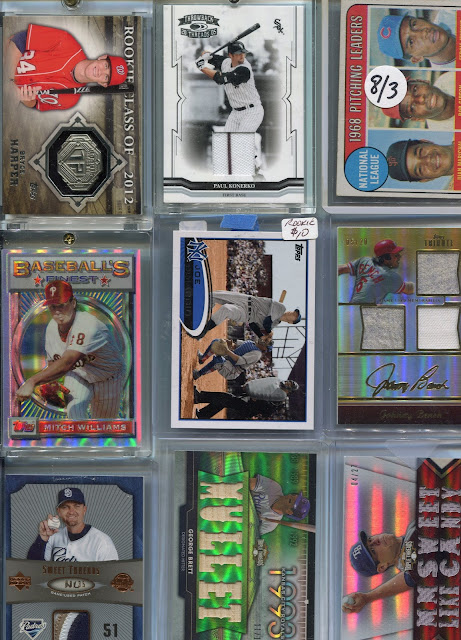 Some other goodies. A 93 finest refractor of Mitch Williams (I now own 3 Phillies, Dykstra and Hollins are the other 2) I do want to complete the Phillies team set eventually. Or the whole set but don't know if I have the resources for that. I'd have to abandon my other PC's and solely focus on that. The Harper was a gift from a friend, really crazy thick card. The Konerko was a prize from Jaybarkerfan in one of his fun giveaways. The DiMaggio is a shortprint Legend from 2012 Topps. The Bench Relic I traded for a while ago and same with the Hoffman from another blogger. The triple threads I purchased on ebay cause I liked the sayings. The Brett is a double sided relic. 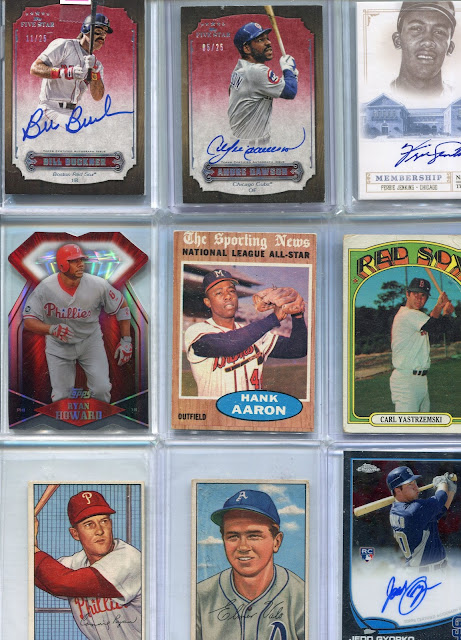 Two Hall of Famers are one good player up top, Bill Buckner, Andre Dawson and Fergie Jenkins (numbered out of 25). A Jedd Gyorko rookie auto, he's now a regular player in St Louis. 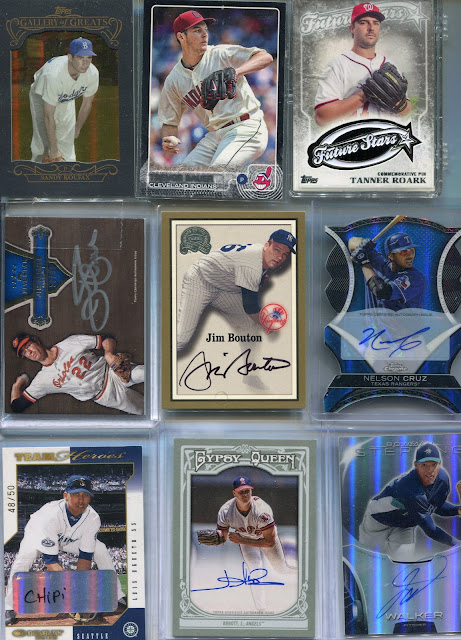 The Koufax, Bauer and Roark came from a random box break. The Jim Palmer silver signature was an ebay purchase. I suppose I liked singles from 2012 Topps Five Star. The Nelson Cruz is a nice diecut auto from 2012 Topps Chrome. Love that set. The best auto of all Chipi. Also the famous Jim Abbott and the still trying to get it completely together Tijuan Walker.

The collection is back to 'complete'. Every card accounted for thanks to the wife!