A Trade with Jeff!

I not so recently completed a trade with Jeff from Wish they Still Came with Bubblegum! He sent me 2 PWE's and managed to fit in 22 cards or so. Very impressive. I sent him a bunch of stuff (I don't remember!) 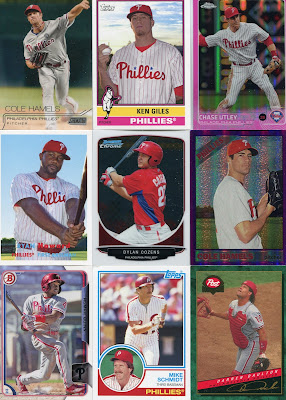 One Envelope was all Phillies. Some good ones in there. I really like the 1957 Archives of Ryan Howard and the Darren Daulton Post card is great. He's still a huge fan favorite around Philadelphia. The Hamels Purple parallel is nice too. He's pitching game 5 for the Rangers tomorrow. I don't particularly care for the Rangers but I'm cheering for Hamels to do well. 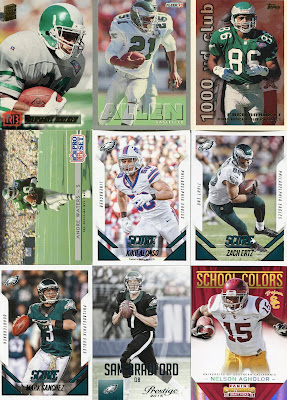 Some solid Eagles additions here. Thankfully they won this week so the radio isn't all doom and gloom. Sam Bradford needs to keep playing to hopefully get back into playing shape from his injuries and just keep getting better. Nothing wrong with an old school Herschel Walker. Ironically he was one of the main catalysts of the Dallas dynasty in the 90s. He was traded from Dallas to Minnesota.

One of these picks ended up being Emmit Smith, another Darren Woodson, Alvin Harper.. some pretty good players.

It rivals the RG3 trade for ridiculousness!

Thanks for the trade and thanks for reading!
Posted by Brad's Blog at 6:15 PM