I unofficially took a week off from the blog, but don't fret I had a good reason. I was on my honeymoon in Ireland touring around the whole country. Awesome trip and was tons of fun! First time I have been there. Back just in time to catch Game 1 of the World Series. Being a Phillies fan, I cannot in good conscious cheer for the Mets. I'm hoping the Royals win this year since they lost last year and have a pretty good young team. Also, Lorenzo Cain was a beast for my fantasy team this year. That's enough reason for me.

I received the Allen and Ginter winner's box in the mail! I plan on opening it Gint A Cuffs style! I don't think the Mike Trout wood mini one of one can be topped but we shall see! (that is not foreshadowing it's sitting unopened next to me at the moment)

I plan on posting some more stuff this week once they come in. Got one big one that I've been obsessively checking USPS so hopefully it comes tomorrow!

And just so you know I'm back.. here's a new Ryan Howard! Silver parallel rookie card! 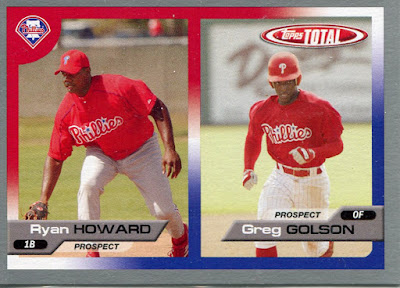 I had gotten the base in a group break a while back, but I didn't have this one. Glad to add it to the Ryan Howard PC!

Thanks for reading!
Posted by Brad's Blog at 5:08 PM