What can I say? With the help of my beautiful girlfriend we opened the 2nd box of the case. This box featured some harder to pull cards. We got the first red refractor of the break and a auto blue refractor (I'm a big fan of the auto refractors I think they look really good). 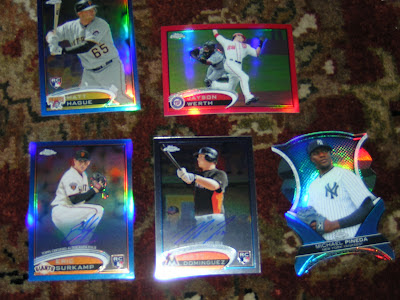 The die cut is Michael Pineda which who knows if he will recover back to his rookie form. The auto refractor is Eric Surkamp numbered out of 199. The other auto is Matt Dominiguez of Miami and according to the back of the card he played baseball with his father and two brothers growing up. The Werth is numbered 1/25 (ebay 1/1!). I'm a Phillies fan if you couldn't tell by the name of the URL so I still like Werth even though he is on the upstart Nationals. The other refractor is rookie Matt Hague from Pittsburgh, I don't know much about him.

I would say the card of the box is the Werth I like the red and I like the player so hard to beat that!