This box proved to be quite fruitful. After 3 boxes I have a complete 220 card base set. Just to put that in perspective last year after 11 boxes I only had 2 base sets of 2011 Chrome. I am well on my way to completing more then 2 base sets which will make trading the base cards much easier. This box had not 2, but 3 autographs. 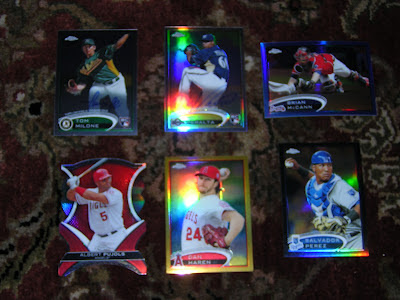 The Pujols diecut is pretty awesome.  I don't often pull nice cards of his so I was happy to see it. The gold is numbered out of 50 thats the first gold refractor of the case. The autograph Wily Peralta is a refractor numbered out of 499. The McCann is a the blue refractor numbered out of 199. Of all the colors even though they aren't the rarest I really like the blue ones. Last year the atomic refractors were the favorite, they look really nice in pages together. The other auto is a base auto of Tom Milone.

Last but not least my monster hit: 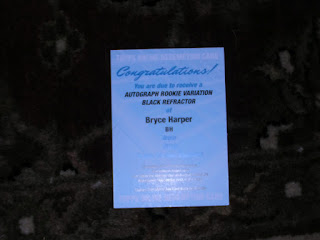 Yes that is a Bryce Harper redemption for a black refractor numbered out of 100!! Super excited to pull something so crazy. I'm leaning towards keeping it and hoping hes the next big thing. I plan on redeeming it at least to have the card in hand and if I want to sell it I would have the physical card to ship. What made this all the sweeter is its just a bonus hit in the pack there was still 4 cards and the redemption card. I don't 100% know how rare it is but based on my sources (Dan from the other world) it could be one every 4 cases. I can't wait to see the card in hand and I will show all of you (currently all 6 of my readers) what it looks like.

I will be busting another box shortly, this case had already surpassed my expectations!