As all of you readers know (or if you didn't I am about to tell you) I am a big fan of Topps Chrome. It's fun to open and it's shiny and I am rarely disappointed by it. It's been my biggest rip of the year since I've gotten back into collecting. For those that followed my case break, I pulled some really good stuff including this monster.. 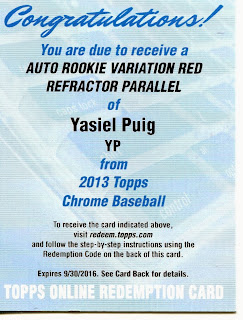 So after hitting this card, I had 3 options, sell it on ebay (and deal with the fees etc), redeem it (and hope I get the card in a reasonable amount of time) (FYI still waiting for my 2012 Harper black auto) or trade it for one of my many chase cards that I want to be apart of my collection.

I took the card with me to a card show and decided to ask different dealers what they thought. Most of them more or less agreed that it falls between 400-600 retail. Which I thought was a fair enough estimate. I know these guys wouldn't pay that straight up cause they want to make a profit. After about 2ish hours (not sure how long but my girlfriend did wander around for a while) of negotiating, I was able to get this card! Never thought I would own one!

Check out this baby! 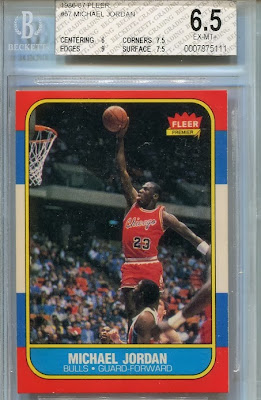 I pulled the trigger on a trade! Puig for MJ! This instantly goes into the top 5 in my collection! Maybe I could've got a couple extra dollars if I just sold it. But as far as a trade goes I'm quite happy with adding this iconic card and I'm sure the dealer flipped the Puig as fast as he could. So it's a win-win!

Thanks for reading!
Posted by Brad's Blog at 7:38 PM