In Honor of Draft Picks and Prospects -- Ryan Howard

As many of you know the prospecting product of the year came out recently. Bowman Draft Picks and Prospects. I've seen a few breaks, some good some bad. I can't say I know all the names of the youngsters but I am curious as to what percentage will turn into something. For every Mike Trout there's 300 Kevin Maas's right? Baseball is hard to be the best in the world at. 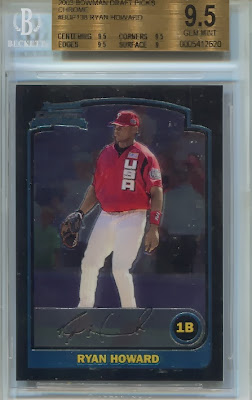 Chooch has officially re-signed with the Phillies! Even though the Phillies should probably re-build, I am happy about that because I like Chooch. The core of the 2008 World Series is mostly still here. I really hope they are eating their Wheaties and really bring it next year.

The best part about this card is I saw it at a card show and inquired about the price. The dealer said to me 100 bucks cause its Gem and thats really hard to find. I was like ok and walked away.. I got the card online for about 17 dollars.