I won a contest and got an awesome package!

I recently won a contest from My Cardboard Mistress! This contest was one of the longer and more involved ones I have seen. In this post from March 10th he lays out the rules. If you don't want to read it, it's essentially picking the team that will win the super bowl based on opening packs in a very well organized format.

My comment for picking the Broncos and ultimately the winner. (The Eagles were already taken)

Brad's Blog said...
Von Miller already said they are winning the super bowl.. so I will take the Super Bowl Champion Broncos

Genius logic obviously!
I eventually won this contest on September 1st!
The prize was worth the wait! I didn't scan everything cause that would've taken me all night. First off not pictured he sent me a unopened box of 1999 Victory Football cards! Promises to have one rookie card in every pack!

I did not pull a Ricky Williams out of the box, but in my opinion got 3 of the top rookies from the year. None other then D Mac, Jevon Kearse and Torry Holt! The photography in this set is mostly fantastic as well. It was quite fun to open and see the pictures. 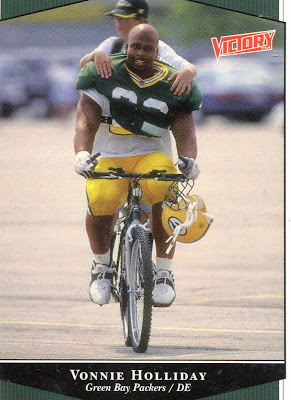 Here is a great example of an amazing picture. So many questions. Why is Vonnie Holliday on a bike in his uniform? Who is riding on the pegs? Where is he going? Does he even know the kid leaning on his shoulders? Some questions will never be answered but this picture is still fantastic! 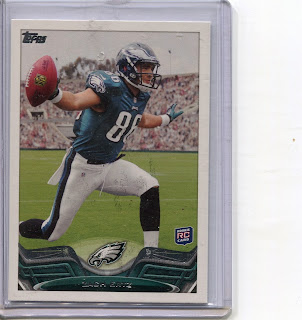 The Zach Ertz is the photo variation short print! I like the fly eagles fly pose! He's been solid this year playing as the backup TE. I think next year he will be the guy and take a big step forward in his role in the offense.

Also, included are three RC's of the most dynamic young QB's in the game today. Russell Wilson and Andrew Luck are both having great sophomore campaigns and are well on the way to their to the playoffs. RG3 is starting to come around from his knee injury and as long as they fix the defense next year they should be a scary team for my Eagles to face. 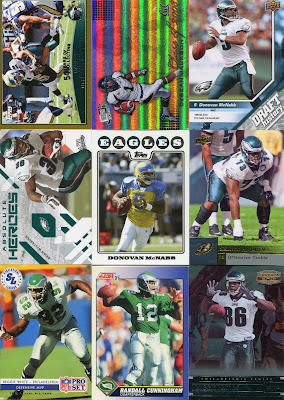 He also included about 4 full team bags worth of Eagles cards! I scanned a whole bunch to show the diversity and interestingness. (made up a word!)  I like how it looks like the ball is floating in Reggie Brown's hands. 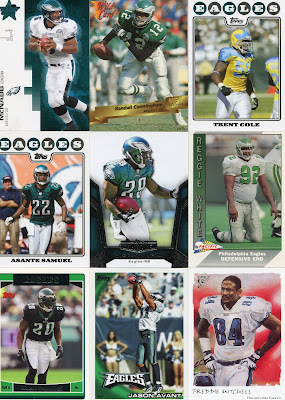 Fred Ex would like to thank his hands for being so wonderful. I wish we still had Asante and B Dawk in his prime in the Eagles secondary. They definitely need some help. 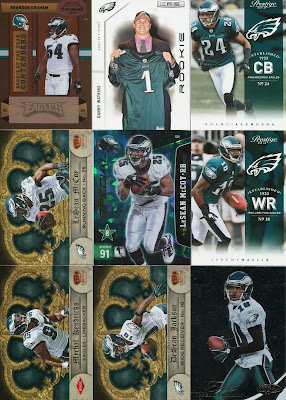 I love cards with crowns on them. Whoever thought of that had a great idea. Asomugha was just cut this week by the 49ers. He did a great job stealing some money from the Eagles when he was here. I thought he was supposed to be the best and he really couldn't cover anyone. 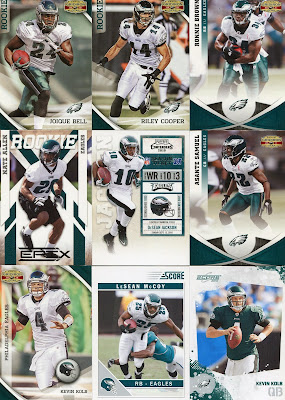 Just picked up Riley Cooper on one of my fantasy teams. Seems like him and Foles have some chemistry. I hope the Eagles keep it rolling against Green Bay today. Should be a good game regardless.

Thanks so much for the contest winnings package. Exceeded my expectations and was very generous. This is just a small sample size of everything included.