My 2nd Greatest Pull of All Time!

Thanks for all the comments on the previous post. I attempted (I googled it while sitting here) to find out the odds on pulling an Elite out of 1993 Donruss and nothing concrete popped up. Yes it was awesome and yes it was surprise. This card while slightly easier to pull still was just as fun. I believe this after a pilgrimage (mom driving my brother and I) to Toy Trains and Sports Cards (no idea if that store is still there). We were each allowed to get one item or box. I settled on 1995 Score because I liked the one per pack gold cards. Figured I'd enjoy opening those no matter what else happened to be in the box.

Luckily enough I pulled this card 1 in 720 packs (according to google).. 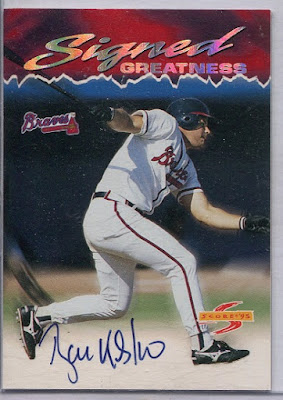 1995 Signed Greatness Ryan Klesko! The next big thing for the Braves at First Base! I know I'm a Phillies fan but it was still awesome! On-card auto! (not that I cared when I was ten) This was a run around the house and tell everyone card! I believe it can be had on ebay now for about 5 dollars! That's a steal!

Thanks for reading!
Posted by Brad's Blog at 6:16 PM