FOUR game winning streak! Not only that, it's against the currently in first place Brewers. The Phillies might be sucking me back in. It's been a semi painful season to watch and sports radio has been killing these guys for a couple months now. Everyone wants to trade everyone but no one trusts Ruben Amaro Jr to make any good deals. I agree though about the lack of him making good deals. He managed to trade for Hunter Pence by giving Astros 3 top prospects. When he traded Hunter Pence a year later (same guy actually did ok on the Phillies stats wise) he got literally nothing. A half year of Nate Schierholtz and a injured (unfortunately) Tommy Joseph. The one trade that drove me nuts personally, is when Cliff Lee was traded to Seattle. It made no sense. The Phillies had just traded for Roy Halladay (who was amazing when he was healthy) and had Lee at a reasonable 8-9 million for the year. They would have had an amazing rotation that year! The Phillies flipped Lee for basically nothing. Philipe Aumont, a light throwing reliever who may or may not get another cup of coffee in the majors, Tyson Gillies (out of baseball) and Juan Ramirez. Fire Amaro now, get someone competent to make some trades!

Check out this card too! 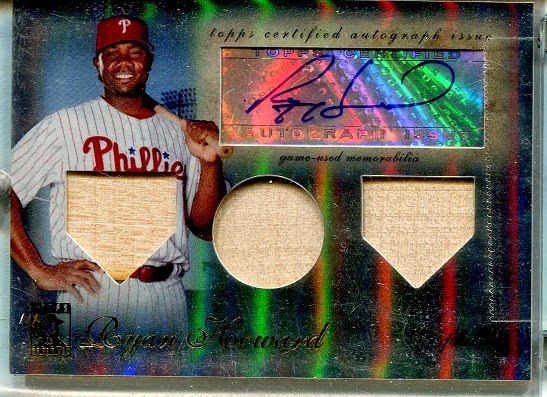 I snagged this card from ebay for under 10 bucks. It's pretty, but kinda odd that Howard had a plate going through his body. It's not in perfect shape but the price was right (come on dowwwn you're the next contestant...) Howard hit his 15th home run of the season this year. I hope he keeps it up and gets at least 30 this year. That will be nice to see!