I have officially typed out all of my Ryan Howard non-numbered cards. Took me a little longer then I wanted to but I am not known for my speed when it comes to that sort of sorting. Next the goal is to organize and catalog the numbered cards I have. I'm sure I'm missing a ton since there are a million parallels but it would be nice to see what I actually have. (Love me some Moments and Milestones!)

Recently the famous former Dodger Blogger GCRL dropped some Phillies on me! 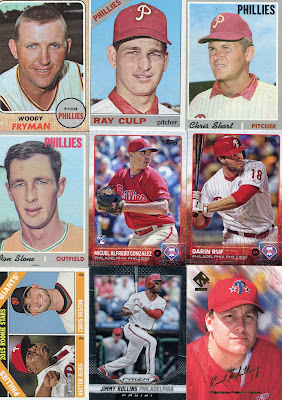 He was super awesome and looked at my vintage want list and knocked some off the list! Always a good feeling to 'cross' out a name. One of my personal favorite binders I have is the Phillies team sets from the 50s and 60s. Slowly filling in all the gaps! Heard a story on the radio about Curt Schilling the other day. Apparently no one from the 93 team actually liked him.. go figure. Miguel Alfredo Gonzalez I believe qualifies as a wasted signing. Originally offered 40+ million then after his physical it dropped to 12 million and hes done almost nothing with the big league club. 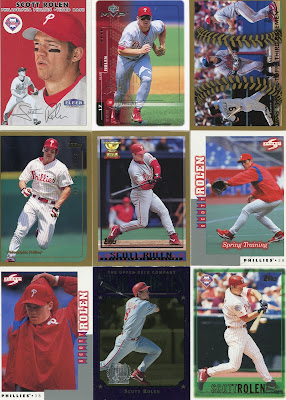 Notice this scan has a theme.. Scott Rolen! I know he won his World Series with the Cardinals but it would've been cool if he was around for the Phillies run when they got good. Third Base always seemed to be the weakest position through those years  (David Bell and Pedro Feliz I think were the 2 regulars without looking)

Thanks for the cards and Thanks for reading!
Posted by Brad's Blog at 7:47 AM