Tonight the Phillies are playing the Marlins. Usually wouldn't be a huge deal because they play each other a lot. But tonight we have Aaron Nola vs Jose Fernandez.. both on my fantasy team! Cheering for a 1-0 game for the Phillies. Each pitcher gets 12 K's and a complete game.

Also here is an excuse to show off my first and only Nola auto.. 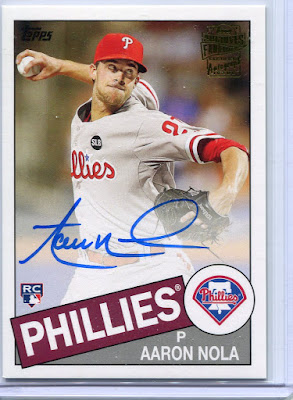 I really like the 1985 design and the on-card auto. He also has a nice sig which is good to see from a young player. 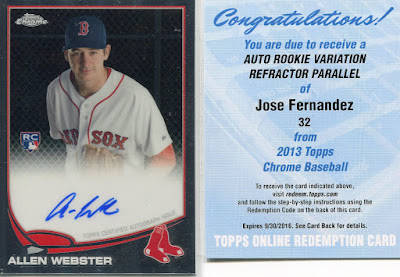 Don't mind the Allen Webster.. I do have the Fernandez live now. I just never re-scanned it apparently. His on-card auto is decent too. I think he has a bright future ahead of them. Will be cool to see 2 young budding aces go at it.

Thanks for reading!
Posted by Brad's Blog at 4:12 PM