This card is a little smaller then I thought it would be considering it is a box topper. It is a nice on-card auto and hand numbered out of 15 which is typical for Ginter box toppers. I own a Javier Baez autographed Boxtopper from another year that I pulled myself. As I mentioned in my other post I had a ton of competition for this card. I went the nuclear option (at least I thought I did) and put a pretty high bid in the last 3 seconds and I won by exactly 1 dollar below my highest bid. Someone else was trying to snipe high just like me. The card is going to the PC of course just trying to figure out the best way to display it. It was sent in a card saver but I don't really love how those look for display purposes. I took it out but I don't have a toploader that quite fits it right so it's currently in a team bag for protection. 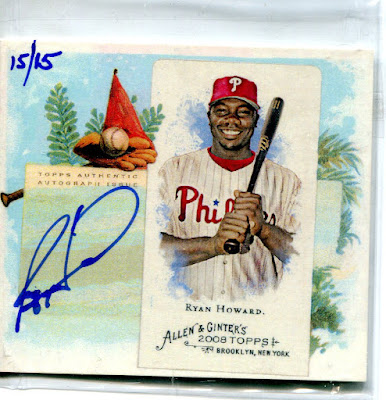 Don't know if I'll ever see another one again in the wild so glad I was able to add it to the collection.

I watched both games last night on TV. I was entertained with some real baseball. Not sure how I feel about the fake crowd noise. The announcers not being in the stadium made no difference to me. I could call the game from my couch if they asked me too. Excited for the Phillies to play tonight.

I don't mind the expansion of playoffs for this year, not sure if it will be a sticking point in the CBA negotiations though. The season is so short this year makes sense to almost do a tournament style for the playoffs.